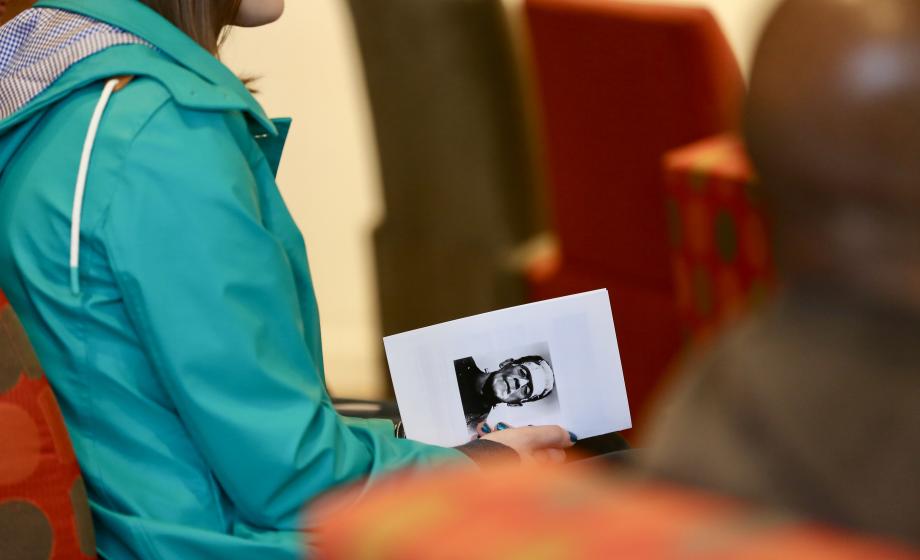 If a great book is one that resonates across cultures and generations, Mary Shelley’s novel “Frankenstein, or “The Modern Prometheus,” qualifies hands down. First published in London in 1818, the tale of Dr. Victor Frankenstein and the 8-foot-tall, semi-human creature that he fashioned elicits in its readers strong conflicting emotions — from pity and empathy to terror and disgust — and remains a source of inspiration for literary spinoffs, movies, cartoons, comic books, and academic discourse.

On April 19 and 20, Professor Lisa Kasmer convened the symposium “Frankenstein at 200,” co-sponsored by Clark University’s English Department and the Higgins School of Humanities, as a celebration and exploration of Shelley’s ground-breaking science-fiction novel.

Kasmer, associate professor of English and Chair, opened the conference by depicting Frankenstein as a beautiful failure, one that foretells the myriad of failed policies of the modern nation-state. In particular, she likened the selfish ambition of Dr. Frankenstein, who sought personal glory through his bungled attempt to create a new species, with what she called “the failed and devastating policy of colonialism in the 19th century,” in which the British government “claim[ed] to be a provider, not a destroyer.”

In her blog post for ClarkWrites, English major Logan Manchester ’19 described how Kasmer “explained the failed policy of colonialism with its paternalistic discourse as being a result of systems of power enforced through trauma that lack a sense of awareness.” Like Frankenstein’s creature, the countries conquered for Britain’s glory were the result of a violent and exploitive process carried on under the guise of bringing the benefits of “civilization” to those it deemed inferior.

Speaker Alan Richardson, professor of English at Boston College, placed “Frankenstein” firmly in the context of the 18th-century Enlightenment, of which Shelley and her intellectual circle were a part.

Richardson noted that some Enlightenment scientists and philosophers — in opposition to accepted religious teachings about a divinely created soul — had begun to posit that the mind, as generator of thoughts and behaviors, was simply the result of a physiological process that took place in the brain. Other scientists were entertaining nascent theories of species evolution, exploring differences between humans and other life forms, and speculating about the nature of human development over the course of a lifetime. Richardson successfully demonstrated that these intellectual explorations provided a highly relevant context for Shelley’s novel.

‘Frankenstein’ and its ‘deep investment in social justice’

In her presentation titled “ ‘Frankenstein’: A Social Justice Manual,” Betsy Huang, associate professor of English and director of Clark’s Center for Gender, Race and Area Studies (CGRAS), called Shelley’s novel “the mother lode of all the great ethical and moral questions that drive the speculative impulse in science fiction.”

What Huang said she finds compelling about “Frankenstein” is its “deep investment in social justice,” especially its “exposure of the ways justice, meted out by individuals and institutions, repeatedly fails its most vulnerable subjects even as it protects members of the most privileged classes.” For Huang, the creature is analogous to the “vulnerable subject,” while Dr. Frankenstein is the person of privilege.

“ ‘Frankenstein’ anticipates contemporary analyses of post-coloniality and raciality,” she said. The bias generated by the creature’s unappealing appearance “sustains the persistence of racism, how it speaks to the place of anger and rage expressed by the abject.”

Melanie Jennings ’19, in her post, noted that Philosophy Professor Patrick Derr’s presentation “applied theological, biological, and philosophical perspectives to argue that the social and scientific age of Frankenstein is upon us.

“According to Professor Derr, the first distinction we must establish … is what is a ‘human’ and what is a ‘person.’ A human represents a number in our living species, whereas a person is an individual deserving of respect. … Elitism denies that all human beings deserve respect and, instead, only particular individuals, usually of superior race, socioeconomic status, and gender, are worthy of such rights.”

Jessica Hoops ’18 wrote a blog post about the presentation made by Jennifer Plante, director of Clark’s Writing Center, who reflected on parallels between the discrimination suffered by Frankenstein’s creature and systemic racism reflected in Jordan Peele’s horror film “Get Out.” The theme “resonates with the Monster’s situation in ‘Frankenstein’ (since his social standing is comparable to other marginalized individuals, such as women, queer people, and people of color),” Hoops wrote.

Hugh Manon, associate professor and director of screen studies, used 1981’s “Frankenstein Island” as a jumping-off point to explore the nature of cult films in the framework of what psychoanalyst Jacques Lacan describes as jouissance, “a sort of excessive pleasure-pain.”

Manon argued that the true cult-film enthusiast indulges in a search for obscure, substandard films like “Frankenstein Island,” hoping against hope that the next “Frankenstein” film will be worth watching, but knowing “there’s a high probability that he’ll find himself deadly bored, and wondering how the film could possibly be so unsatisfying.” At that point, the viewer will discover another film with Frankenstein in the title, and repeat the process.

Panel session wraps it all up

“Frankenstein at 200” concluded with a panel session titled “Understanding the Monster: A Strange and Terrific Story,” at which four Clark English majors presented papers:

Serving as facilitators at the symposium were Esther Jones, Stephen Levin, and Meredith Neuman, all associate professors of English; Jessica Bane Robert, assistant director of the Writing Center; and Jessica Hoops ’18, co-president of the English Honor Society.