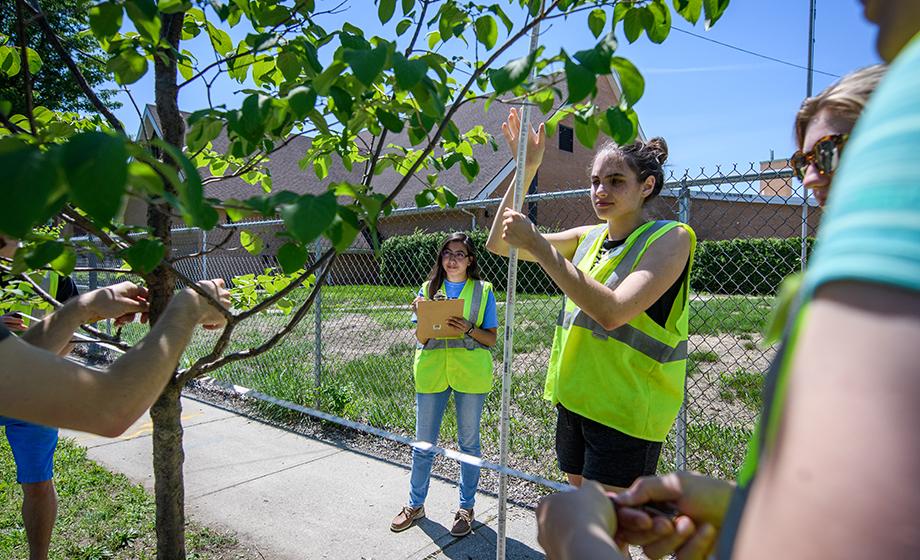 Massachusetts’ Gateway Cities sport architectural reminders of their once-bustling industrial past: factories, warehouses, and ubiquitous triple-deckers, all built close to the street. What’s often missing from this picture? Trees.

This summer, six Clark University undergraduate researchers have joined a multi-agency effort to increase the tree canopy to these 26 small- to mid-sized Gateway Cities, bringing cooling shade to residents in summer and protecting them from blustery winds in winter, helping curb energy costs.

The students are conducting research as part of Clark’s HERO (Human-Environment Regional Observatory) program. For 19 years, undergraduate and graduate students and faculty in the Graduate School of Geography have explored the interaction between humans and the environment, from how much people tend and water their lawns, to measuring the success of the Worcester Tree Initiative’s replanting of trees after the Asian long-horned beetle invasion.

This year’s HERO Fellows are focusing on Chicopee and Fall River, where they will survey trees and interview residents to see if Massachusetts’ Greening the Gateway Cities Program has paid off. The effort aims to increase tree canopy by 10 percent in high-density neighborhoods by providing residents with trees and planting them along city streets. Last year, Clark’s HERO Fellows focused on the Gateway Cities of Holyoke, Chelsea, and Revere. Tree planting occurs mostly in low-income neighborhoods where most people rent housing.

“We see this year’s summer HERO as an extension of last year’s program,” says John Rogan, professor in the Graduate School of Geography who oversees the program with Deborah Martin, the school’s director. “By collecting data and interviewing key informants – foresters, environmental stewards, and city residents – we’re starting to understand the reactions and responses to change.”

For the students, the HERO program has added benefits: They receive an eight-week stipend, academic credit for their work during the 2018-19 school year, and funding to attend and present research at the Association of American Geographers’ annual meeting next year in Washington, D.C. They also will present posters at Clark’s Fall Fest and Academic Spree Day research events, may see their papers published in research journals, and will become eligible for honors and awards.

Many of the HERO Fellows say they decided to come to Clark because of the University’s emphasis on undergraduate research, small classes, inclusivity, and opportunities to connect with faculty – all of which the HERO Program emphasizes.

“I like all of the opportunities that Clark provides, like this research program,” says Rachel Corcoran-Adams ’20, an international development and social change major from West Hartford, Connecticut.

The HERO Program “provides students an opportunity to apply a wide range of skills in a research project that has real-world outcomes,” adds Andrew Pagan ’19, a geography major from Hanson, Massachusetts.

A May 21 kick-off breakfast introduced the students and the Greening the Gateway Cities project and drew a number of HERO’s partners, including officials from the Worcester Tree Initiative, state Department of Conservation and Recreation, U.S. Department of Agriculture, and state Rep. Mary Keefe and other Worcester residents.

The students will report their findings to stakeholders at a presentation on Thursday, July 12, at Clark.