With his focus on computer science, math and comparative literature, Clarkie brings well-rounded background, critical-thinking skills to world of coding
By Rosie Nguyen '19 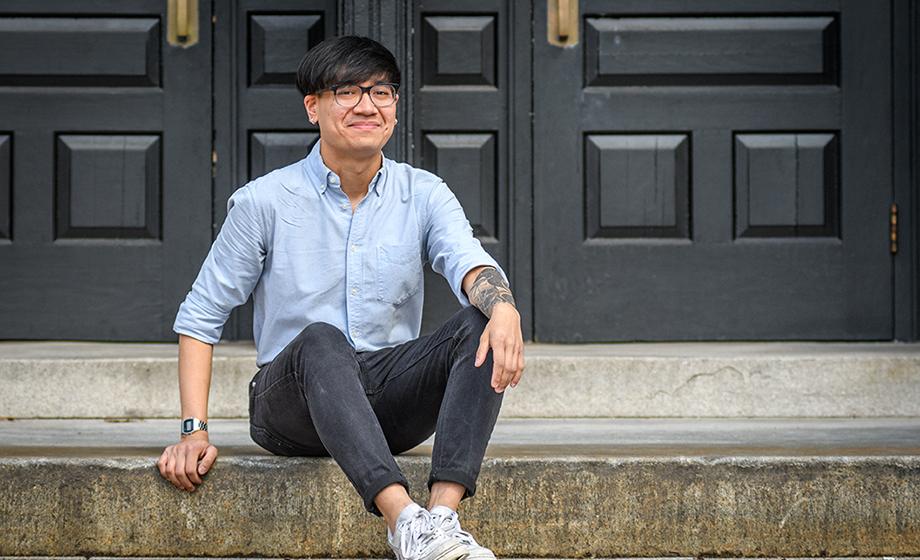 Christian Rentsman ’18 just graduated from Clark University — and already has a job to boot. Originally from Corona, New York, Rentsman is moving cross-country to Seattle to work as a software engineer at Amazon. He’s familiar with the company, having interned there last summer.

Rentsman was a double-major in computer science and mathematics, with a concentration in computational science and a minor in comparative literature. While at Clark he was on the e-board of the Clark Competitive Computing Club (C4), was an executive editor of the Scholarly Undergraduate Research Journal (SURJ), and, at one point, served as head designer for The Scarlet.

Below, he talks about how Clark prepared him for the world of work.

What did you like best about being a student at Clark?

One of the most fruitful parts of being a student here is the ability to get to know people closely since the school has a small population. There’s something really awesome about learning in an environment where people are striving to become good people in a holistic way — intellectually, emotionally, and socially. The support I’ve received from my incredible professors and the general student body has been, at times, quite overwhelming.

What has made your time at Clark unique?

My exposure to a variety of fields and disciplines has definitely made my experience here unique, as well as the myriad opportunities I’ve had to speak with my professors and get to know them personally. I truly believe the wealth of this university can be found in its professors and its liberal arts approach to learning.

How have you applied what you learned in your major to the real world?

The most important skill I’ve learned is simple problem-solving capability — specifically, the ability to break problems down into smaller components, analyze each piece carefully, and start building a solution incrementally. I’ve sharpened my ability to learn things quickly, to work independently, and to construct software from the ground up.

How have your faculty advisers helped you?

My faculty advisers are Professor Li Han in computer science and mathematics, and Professor Alice Valentine in comparative literature.

Professor Han has helped me develop my problem-solving skills to an extent that I could’ve never imagined when I first declared a major in computer science. She’s helped me find various opportunities inside and outside the Computer Science Department, and guided me in the internship search process. Her consistent advisement and motivation have paid me dividends regarding my current career opportunities and overall outlook on software development.

Professor Valentine first planted the idea of studying comparative literature in my head. I taught myself how to speak Japanese pretty well during high school, so I decided to take her Japanese class to further my conversational abilities. It was probably one of the best decisions I’ve ever made. She has cemented my love of learning languages and has sparked my desire to examine society through a cultural lens.

Are there any other professors who have mentored or inspired you?

Professor Michael Satz has been an important teacher for me in mathematics. He’s a wonderful professor who encourages his students to truly learn the material.

Professor Betsy Huang has been an inspiration to me. I took her class in Asian-American fiction, which is something I never really explored growing up, and that has turned out to be an important source of identity for me. I didn’t think critically about my racial identity until I came to Clark, and this class exposed me to literature’s ability to represent or effectuate change in cultural and societal values.

What work experience did you gain while at Clark?

The job I held the longest was as a computer science teaching assistant, specifically for the problem-solving portion of the major. I also helped upgrade the Computer Science Department’s system for automatically grading assignments.

I’ve had two software engineering internships. The first was at a small e-commerce company based in Manhattan and the second was at Amazon, where I had to architect, design, and justify the need for a project put forth by my team. Then I had to learn all of the various technologies I would use to build the system. Finally, I had to implement the actual system and put it into use. In essence, it was the experience of a full-time engineer, just a bit shorter and with a bit more guidance.

What skills did you learn at Clark and then apply to your internships?

Hands down, it was the ability to communicate and write effectively.

All ideas and presentations within Amazon start with a six-page written document. You cannot make a PowerPoint presentation for these meetings. You have to be able to discuss all of your thoughts in writing, in a concise manner. This includes what your project is, why it’s necessary, how it’s going to be built, why it won’t be built another way, what’s the plan for building it, how its efficacy will be measured, what technology you’ll use, why you’re using that technology, and why you’re not using this other piece of technology. If you’re not able to write clearly and concisely, then you’re not going to be able to craft a convincing and easy-to-understand argument regarding why you want to build a system a certain way. It forces you to think deeply about your design choices as an engineer.

The skills required to craft effective, structured arguments are the same core skills necessary for building well-designed and intuitive programs. Clark puts critical-thinking skills and diverse thinking at its helm. To me, this is deeply important regardless of industry.

What did you learn when completing this Amazon project?

My biggest takeaway was how high-level software engineering works from start to finish. You learn the best from actually building things. Being part of a team dedicated to producing quality code and well-designed programs was important to me and has had a huge impact on how I approach software engineering problems today. It also helped with my writing.

Can you describe your most memorable moment during your Amazon internship?

My most memorable moment was when my project finally started functioning on its own. This was about 11 weeks into my internship, meaning I had about a week left to wrap things up. I had written all of the code for my project and had designed it myself, but it still felt like magic once everything started to work together.

What is your vision for your life, as well as your career goals?

I’d like to be a software engineer for a while, transitioning to a high-level software architect at some point. Something that deals with big data would be crazy, too. At the same time, there’s a lot of stuff I’d like to learn and study. I’m considering graduate school in the future — mathematics or literature. I’m also thinking of going to design school for a while, too, since I’m also interested in graphic design and web design.

I’m definitely thinking about traveling the world, too. All this language learning should culminate in something, right? There are just a lot of different things I want to do, and I hope I have the time for them.