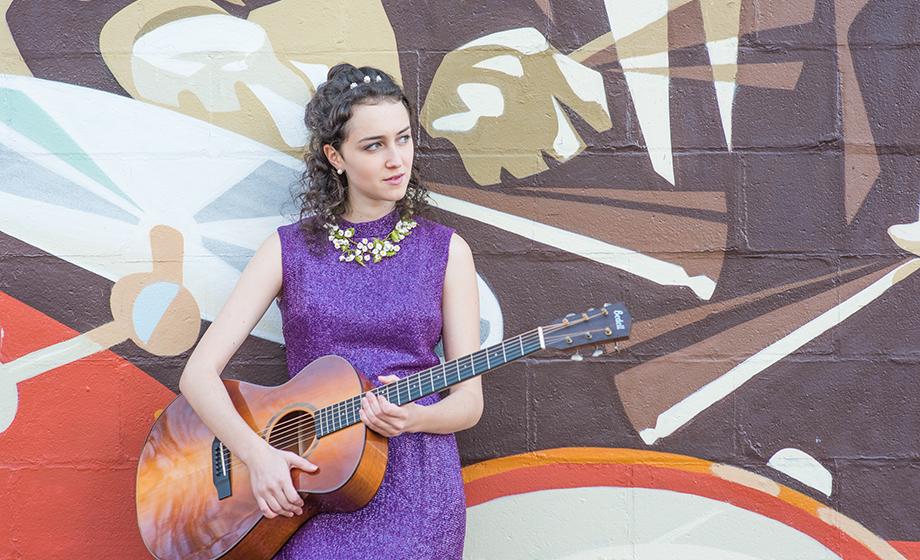 “I got out of my seat and started jumping around!”

That’s atypical behavior for students using Clark University’s Goddard Library— inadvisable, really — but Olivia Schwartz ’19 couldn’t help herself. One day in February, the global environmental studies major was studying on the third floor when she learned she’d been nominated for the Independent Music Awards in the Love Song category.

The singer-songwriter submitted “Moon to my Sun” in November under her stage name, Olivia Frances. “I hadn’t even released the single yet, but I figured, why not?” she says. Nearly two months after receiving word of her nomination, she was leaving New York’s Lincoln Center for the Performing Arts with the Vox Pop (Voice of the People) Award.

A songwriter since age 12, Schwartz was a Cincinnati high school student when she discovered a blog written by Ariel Hyatt ’93. “I somehow stumbled onto her blog five or six years ago, and I’ve been receiving her newsletter ever since,” she says.

Hyatt has worked in the music industry since graduating from Clark. After a brief stint in New York, she moved to Boulder, Colorado. “[In Boulder,] being a bar manager was the only thing close to being in the music business, so I started my own gig,” she says. Hyatt founded the boutique firm Cyber PR, which specializes in helping musicians brand and position themselves in the digital sphere, before eventually moving operations back to New York.

This April, she was invited to give a workshop to developing artists at the Independent Music Awards. In attendance? Olivia Schwartz.

“It was wild,” says Schwartz, who says Jonathan Burton ’92 from University Advancement at Clark had recommended the two get together at the event. “She gave us a lot of tips. I really respected how honest she was about things like getting on Spotify playlists.”

“Artists tend to fixate,” Hyatt says. “When I graduated, it was all about getting into Rolling Stone. Now it’s, ‘Get me on a Spotify playlist.’”

Hyatt prides herself on helping facilitate connections between musicians. “Artists are so ready to get up on stage,” she explains, “but sometimes they are really introverted.” That was true for a lot of the artists in the room at the Independent Music Awards, but not for Olivia Schwartz. Says Hyatt, “She’s a firecracker.”

Hyatt encourages musicians always to be networking and collaborating, noting, “Those are the artists who make it.”

Schwartz will work to expand her network this summer when she records in Nashville and tours the Northeast. Her Chautauqua Tour (named for the location of her grandparents’ home in Chautauqua, New York) will kick off in Dennis Port, Mass., on June 30. There, Schwartz will perform with a full band on Cape Cod’s “Live from Center Stage” before making her way up the coast to Maine. “The first leg is pretty much booked, but there’s more still to come,” says Schwartz, who expects to hit as many as 20 cities before returning to Clark in the fall.

Learn more about how Clark students and alumni come together for career mentorship and opportunities through ClarkCONNECT.