Whether producing poetry or pondering philosophy, Jessica Hoops ’18 has a way with words 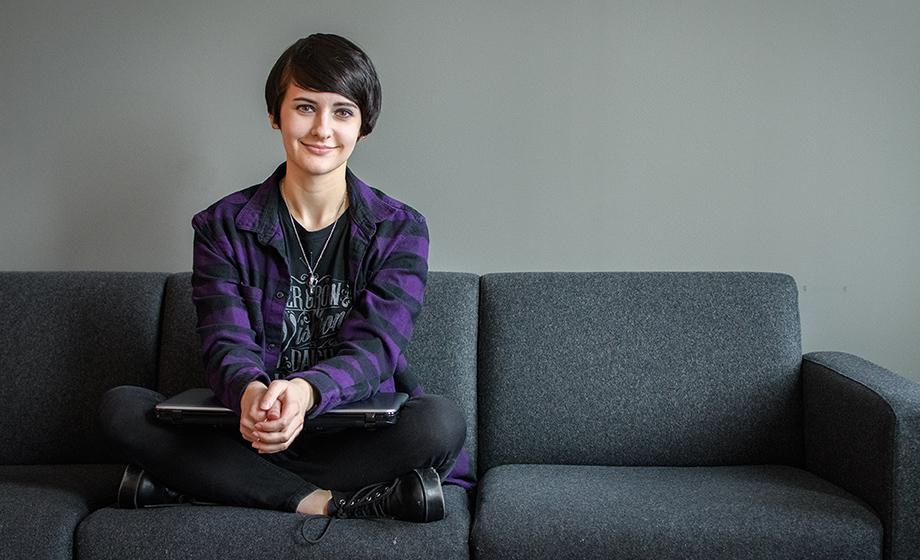 As a newly minted graduate of Clark University, Jessica Hoops ’18 has left her mark here — especially in the world of words.

Hoops, who majored in English and philosophy, received an honorable mention in the Worcester County Poetry Association’s 2018 College Poetry Competition. Selected from among six nominees to receive the Runner-up Manuscript Prize, she was invited to read from her work at a special event at the Worcester Public Library in April.

“Winning the honorable mention has definitely provided me with a little more motivation to continue writing poetry regularly, which is something I hadn’t done much this year outside of class,” Hoops says. “It’s nice to know that other people value my work and want to see more of it.”

She was nominated for the contest by the English Department Chair and Associate Professor Lisa Kasmer and Professor James Elliott. Kasmer submitted three of Hoops’ poems, including one that had won third place in Clark’s Prentiss Cheney Hoyt Contest in 2017. Hoops’ poetry also won first and second place in 2015 and 2016, respectively, in the same contest. Her poem “Ash Wednesday” appeared in The Worcester Journal in 2015.

Hoops, of East Hampton, Conn., kept busy reading, writing, and editing during all her four years at Clark. She was editor-in-chief of Clark Writes, the English majors’ blog; president of the Clark chapter of Sigma Tau Delta, the international English honors society; a member of Phi Sigma Tau, the national philosophy honor society; and a writing consultant for Clark’s Writing Center. She was named to the Dean’s List multiple semesters. In the summers of 2016 and 2017, she worked at The Robbins Office Inc., a literary agency based in New York, and in summer 2015, she interned with New York Times-best-selling romance writer Kristan Higgins. This spring, Hoops was elected into the Phi Beta Kappa honors society, and she received Clark’s David Saltman Prize in Philosophy.

“I’ve always loved literature, and I was drawn to the idea of working in the publishing industry pretty early on in my college career,” she says. “I ended up choosing to double major in philosophy after taking a couple classes during my first semester. Both English and philosophy are writing- and reading-heavy majors that complement each other nicely, and they’ve greatly improved my verbal and written communication skills.”

Hoops now hopes to find a job in the publishing industry.