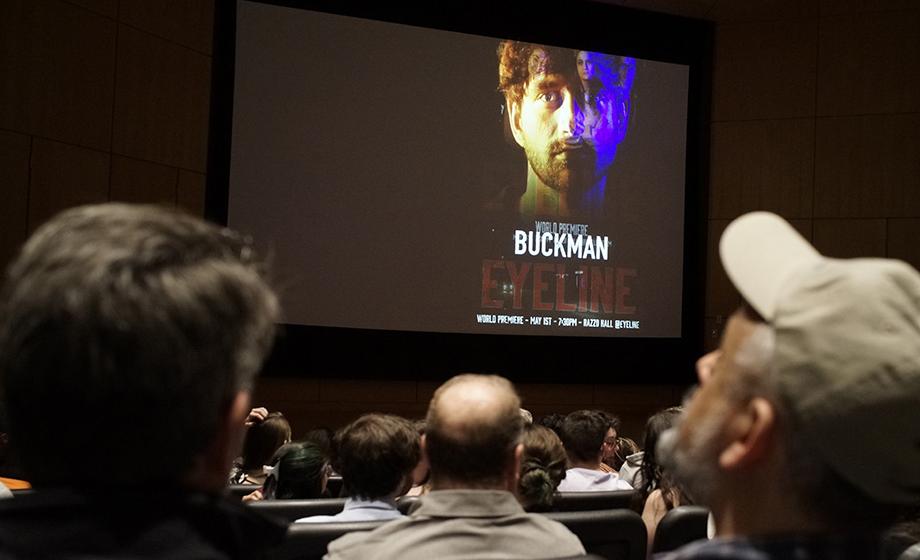 Murder. Betrayal. A man tied up in a basement. A woman crashing through a window. Menacing hallways and shadowy corners hiding ugly secrets.

Just a typical night at the movies for Clark University.

That’s a bare description of “Eyeline,” a neo-noir thriller written, directed, produced, and acted by Clark students who took Genre Production Workshop, a Problems of Practice (POP) course, with screen studies lecturer Soren Sorensen. An audience of students, faculty, and staff packed Razzo Hall for the May 1 premiere, which included a red carpet gracing the lobby.

The film drew chuckles of recognition for its Clark settings — from the streets of Worcester to the Goddard Library stacks — and the Clark-related quips. At one point, Sullivan demands Marcotte tell her his name: “You know, like at Orientation.”

Over the course of three months, 17 of Sorensen’s students, along with another student from outside the class, gave cinematic life to rising senior Colleen Durkin’s screenplay about three friends unlocking a series of cryptic messages to solve the mystery of a disappearing corpse. Taylore Lombardi ’18, Bridgette Sullivan ’19, and Dylan Tovey ’20 play the trio of pals hunting for answers. Max Marcotte ’20 is the unfortunate soul who gets in their way and becomes their hostage. Little, of course, is what it seems.

The final confrontation (no spoilers here) and closing shot brought loud applause from the audience. A blooper reel show after the 35-minute feature earned big laughs.

Sorensen then asked the student filmmakers to assemble on stage, where they answered questions about the joys and struggles of the production process, and their specific roles in bringing “Eyeline” to the screen. The cast and crew related how they secured props, found locations, lit scenes to keep within the moody traditions of the great noir films (noir is French for “black”), and, in the case of Ben Livingston, composed an original music score. The actors were coached by, among others, Lauren Adams, one of the stars of the Netflix series “The Unbreakable Kimmy Schmidt.”

Director Sarah Kaplan ’18 said she was excited to work on a film with two female leads — a rarity in the neo-noir genre — and with a strong mix of people on the crew. At a time in the movie industry when women continue to be underrepresented behind the camera, “I felt my voice was clearly heard throughout.”

“Eyeline” can be viewed here.