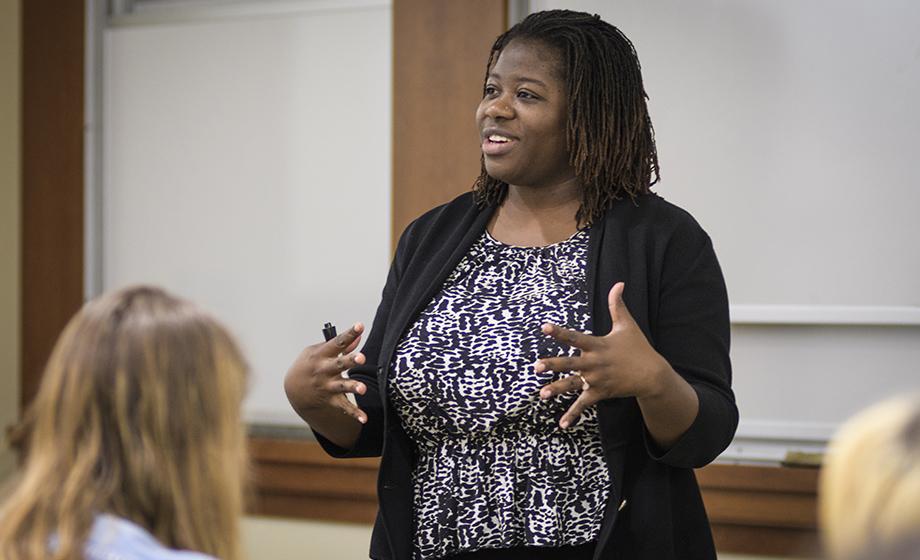 Nicole Overstreet, assistant professor of psychology at Clark University, has been named a 2018 Nancy Weiss Malkiel Scholar by the Woodrow Wilson National Fellowship Foundation. The award, which is funded by The Andrew W. Mellon Foundation, supports junior faculty from underrepresented groups and others committed to eradicating disparities in their fields.

Stephanie J. Hull, executive vice president and chief operating officer of the Woodrow Wilson Foundation, said the scholars “represent both research excellence and an extraordinary commitment to mentoring students and serving their campuses and professions.”

Overstreet will receive a 12-month award of $17,500 while working toward tenure to support her research on how socio-cultural processes — such as stigma, stereotyping, and discrimination — influence mental and sexual health disparities for black women and other marginalized groups. Overstreet also examines the relationship between objectification, violence, and health, with a specific focus on the intersection of multiple identities such as race/ethnicity, gender, and sexual orientation.

Overstreet recently received $100,000 from the Robert Wood Johnson Foundation (RWJF) to fund her research on health outcomes for those who experience intimate partner violence. She also received funding from the HIV and Drug Abuse Prevention Research Ethics Training Institute, directed by Celia Fisher at Fordham University and supported by the National Institute on Drug Abuse, to support her research on the role of intersectional stigma in research among African-American women living with HIV.

Clark awarded Overstreet a Hodgkins Junior Faculty Award for Excellence in Research and Teaching in 2017.

“I am honored to be selected as a 2018 Nancy Weiss Malkiel Scholar, and I remain committed to diversity and inclusion in higher education,” Overstreet said.

Overstreet earned a doctorate in social psychology from the University of Connecticut and was a postdoctoral fellow at the Center for Interdisciplinary Research on AIDS at Yale University. She joined the Clark faculty in September 2014.

The Malkiel Scholars Award honors Dr. Nancy Weiss Malkiel, a leading scholar of civil rights and race relations in early- and mid-20th-century America, who became the first woman to join the faculty of the Princeton University Department of History in 1969.

The Woodrow Wilson National Fellowship Foundation website states the 2018 Malkiel Scholars “represent the next generation of leaders and scholars in the humanities and social sciences who are poised — like the program’s namesake — to play a significant role in shaping American higher education.”