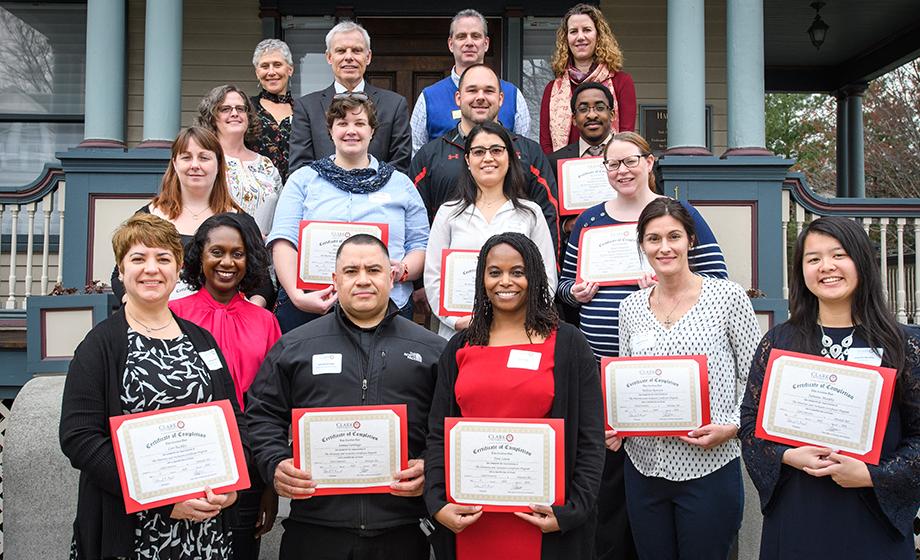 Clark University is hosting two commencements this year. In fact, one of them has already taken place.

On April 27 in Harrington House, 14 people were honored for completing Clark’s inaugural Diversity and Inclusion Certificate Program. Sponsored by the President’s Office and the Office of Diversity and Inclusion, the program was designed to give Clark professionals and graduate students an opportunity to “engage in authentic, critical dialogue, and in-depth examination of diversity, difference, power, privilege, and beyond to understand how we can — and why we should — work together to build a more inclusive community.”

The program equips participants with the knowledge and skills to more effectively work and learn in an intercultural and diverse environment.

Sheree Marlowe, chief officer of diversity and inclusion, told the audience her goal was to create a campus program that was “intentional and ongoing,” rather than encapsulated in a one-off event or a single high-profile speaker. “I want to thank all of you for having these courageous conversations, for being willing to be uncomfortable at times, and for embracing important issues,” she said.

President David Angel said Clark’s attention to diversity and inclusion efforts can be traced to former president Richard Traina, who moved the president’s residence from Worcester’s west side to the Main South neighborhood.

“It was an iconic, important decision,” he said. “We’ve become a more interesting, more relevant place because we’ve been deeply engaged in so many dimensions of this community.”

President Angel noted that “great strength can emerge when you place diversity and inclusion at the core of your identity and your mission.” He said Clark is committed to building cultural competency across the university, and he thanked the participants for being the first to “take the leap.”

“I’m sure we’ve learned a lot from you in this program that will allow us to continue to build on what’s happened here,” he said.

Marlowe said the certificate program’s “learning into practice” component sets Clark apart. Not only do participants take nine sessions, they each submit a proposal describing how they will apply what they learned to a campus project in their specific area/discipline or department. Examples include developing a survey tool to assess the various diversity-related engagements/workshops for undergraduate students, and planning to create Safe Space/LGBTQ+ Training for students, staff, and faculty.

The goal, Marlowe said, is to work with resident assistants and peer advisers to implement the initiatives in summer 2019 and have regular sessions moving forward. Two faculty members would organize several workshops in their department to examine how diversity and inclusion are represented in curricula, teaching strategies, advising, recruitment, and other areas.