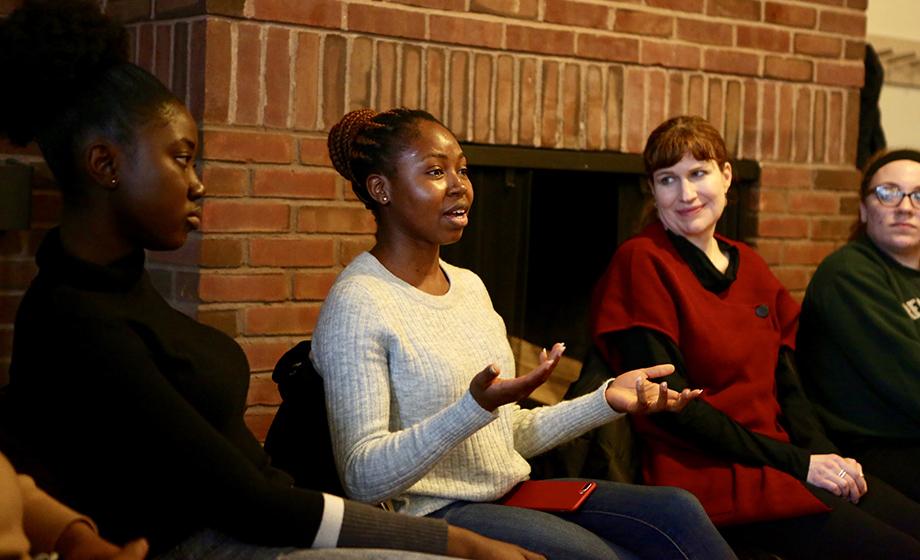 While Ryan Coogler’s “Black Panther” has smashed box-office records since its release in February, the Clark University community recently gathered to discuss the film’s other, more culturally significant, impact.

Many of those gathered in Dana Commons’ Fireside Lounge applauded the Marvel Studios superhero film for its depiction of strong, complex black characters living and thriving in a black-centric world  — the mystical African nation of Wakanda. For African-Americans especially, the film’s significance might be summed up by The Root, an online magazine devoted to black culture, whose staff proclaimed: “We went to opening night of ‘Black Panther’ and now we want to live in Wakanda forever.” That quotation opened a campuswide invitation to the Clark event, scheduled soon after the movie’s opening, but switched to April because of a snowstorm.

The event drew a roomful of Clarkies, including alumna Clark Jackson ’14, who traveled from Boston to add to the conversation.

“Black Panther” — with its African superhero T’Challa, played by Chadwick Boseman, and other multi-dimensional Wakandan characters — is a celebration and recognition of black culture and history that is a long time coming, many attendees noted. But the film, nevertheless, is deeply nuanced, much like African and African-American history itself.

Best recalled how African-Americans celebrated and lined up for the film’s opening night, dressing up in black-oriented fashion or African prints — what some cultural critics called “spectacle” or “fetishism” — to attend the film’s opening night. “It didn’t feel like fetishism to me; I had it in my closet,” she said. “It felt very futuristic and also very present.”

She recalled sitting amid a mostly white audience, many of whom clearly loved the movie, but sometimes missed the black-culture references. She also saw significance in the location of black Wakanda, hidden from a white-dominated world.

“The idea of black life hiding in plain sight is our present, and a beautiful metaphor for our current situation,” she said.

Power-Greene touched on a recurring theme in the discussion: “I found it entertaining and interesting, despite some of the contradictions.” For instance, he questioned whether the filmmakers are depicting a traditional Africa, a romanticized Africa, or a “subtle place that is nowhere” – a point also made by Palella in his explanation of the etymology of utopia as both “good place” and “no place.”

Huang noted that “ ‘Black Panther’ makes a contribution to Afro-futurism in a spectacular way,” depicting how “a place like [Wakanda] can flourish, and how it addresses the complexities of black nationalism.” She also noted the “intersections of Asian and black racialization” in the film, in which an Asian city is portrayed as “a very cosmopolitan city where illicit trade takes place” — what she called the “techno-Orientalist fetishization of the Asian landscape” — versus the idyllic utopia of Africa’s Wakanda or the stereotypical violent streets of Oakland, California.

Faculty and students also addressed additional contradictions and themes running throughout the film: “toxic masculinities,” or stereotypical masculine gender roles that result in men’s exertion of power and privilege over others, in a film that celebrates black nationalism; the dearth of LGBTQ characters in a place where other once-subjugated people flourish; the representation of powerful military women charged with protecting black male bodies; the legacy of black Africans sold into slavery, and how that plays out between the African Wakandans and their long-lost African-American relatives; how African moviegoers reacted to “fake” accents in the film, and how, as Huang noted, “the language and accents are coded in colonial discourse”; and much more.

But after almost two hours of discussion, which raised a multitude of questions and comments, one in particular gave pause: When will there be a sequel to “Black Panther”?

Now that another Marvel film, “Avengers: Infinity War,” has been released, it’s still unclear (and here, we offer no spoilers) what fate has in store for Black Panther and the people of Wakanda. As they say in the entertainment business: