Via Clark, Tiana Golding ’19 finds her way to China — and success 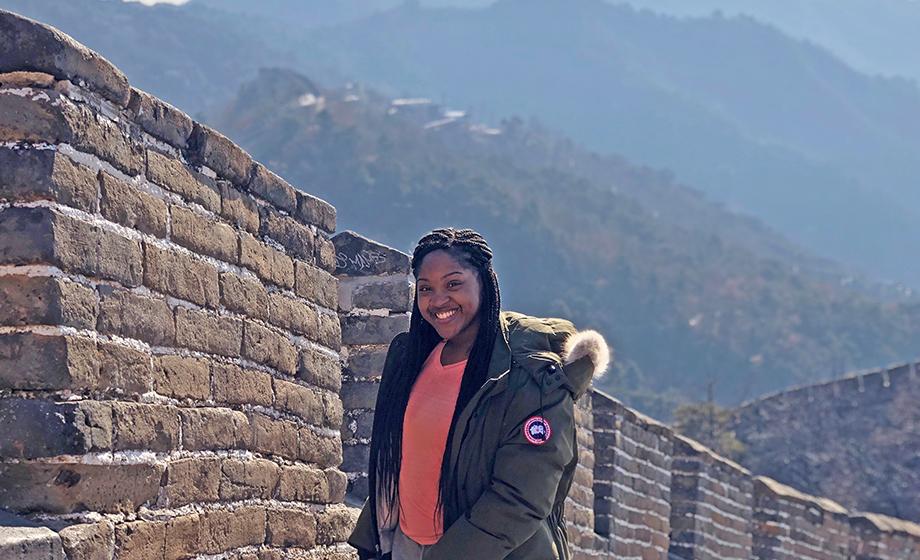 For years, Tiana Golding ’19 has been fascinated with China and how the world’s most populous country interacts with the United States. She studied China as a student at the Academy of the Pacific Rim Charter Public School in Hyde Park, Massachusetts. And she set her sights on continuing her studies at Clark University.

When those plans didn’t pan out, however, she spent her first year at a state university. Undeterred, she applied to Clark again, drawn by the motto, “Challenge Convention. Change our World.” She got in, and transferred here in 2016.

Golding immediately found she could pursue her academic goals. “With any opportunity I’ve had to conduct research on a topic of my choice, it has almost always been China-related,” she says.

“It was my favorite class that I have taken so far,” she says. “Our final project for the class was to do a research project on anything about China, and I chose to write about migrant workers in China and the struggles they face.”

Now a junior, Golding has continued her study of China and other countries through her double majors in Asian studies, and international development and social change. She’s also traveled there to study abroad this year, participating in a January term in Beijing and a spring semester in Shanghai. (At top, she visits the Great Wall of China.)

“Janterm was a language intensive that consisted of a semester’s worth of work condensed into a month. All participants of the Janterm must sign a 24/7 language pledge, vowing to only speak Mandarin for the duration of the trip,” she explains. “The one-month program improved my Chinese by two levels, bringing me up from the mid-intermediate level to the advanced level.”

Golding is taking classes at Donghua University and interning with DoBe WE, an events planner for cultural and creative industries in China.

“The main goal of DoBe is to foster cross-cultural communication, networking, and community collaboration,” she says. “My specific roles include giving tours of the venue to guests, translating event invitations, taking pictures at the events, as well as networking.”

Throughout the spring, Golding has documented her study-abroad experience (check out her photos). She had hoped to post her Vlogs to YouTube, but China’s “Great Firewall” kept her from uploading them.

Golding is thriving at Clark, in part, she says, because of the support she received when she first transferred here.

“No matter what problem I was going through, there was always someone here at Clark for me to talk to and receive the help I needed,” she says.

She points to Nadja Johnson, assistant dean of students; Evette Walters, assistant director of academic advising in the LEEP Center; and Hayley Haywood, director of multicultural and first generation student support, as “three amazing figures who have helped me through all that I have been through in the past year, and I am forever grateful for them.”

And now Golding is giving back. In August, she’ll serve as a mentor for first-generation and multicultural students as part of Clark’s Connections pre-orientation program.