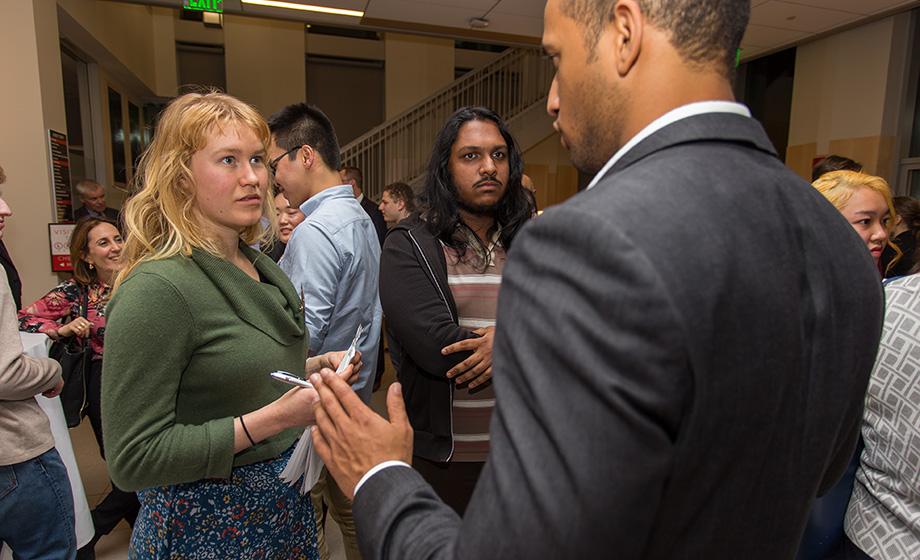 The event was the fourth of Clark’s Networked Communities initiative, which connects students to alumni, faculty, parents and outside partners for career mentorship opportunities.

Ball, who began her career lugging camera equipment for a local cable news station, stressed the importance of common sense and thoughtfulness. She recalled an internship candidate who made an impact by offering to take Ball out for coffee. The monetary value of the offer wasn’t the point, she said, but rather that the applicant showed resourcefulness and generosity. “Be authentic,” Ball advised. “If you’re not, it will show through.” She advised the students in the audience also to be aware of the kind of work culture they prefer, one that reflects their passions and values.

Callender shared a story to emphasize the importance of valuing another person’s time when networking. After graduating from Clark, he set up meetings with executives in Washington, D.C., hoping to land a job in international development. At one meeting, the interviewer stopped him to note how badly the discussion was going. Looking back, Callender realized he was asking questions of this busy professional that could have been answered with a quick Google search. “Get educated before you meet with people,” he said.

Derr said he struggled to envision his career and life path while he was in college, and left Clark several times, but always returned. In one class, Derr overheard a professor telling another student that she could do anything she set her mind to and this served as the catalyst he needed to graduate. The lesson: “Take a risk, empower yourself, and start over if you’re not on the path you want to be on.”

Murphy imparted advice that she received on a Boston sidewalk from a stranger as she nervously walked into the Public Consulting Group for her first day of work. The man told her, “Do the job that no one else wants to do.” She did exactly that, assuming some of the least sought-after tasks and roles, and accumulating expertise that contributed to her later finding success as CEO of Annkissam, an operations and technology-consulting firm for nonprofits.

DiSano, who described his path from successful venture capitalist to technology executive and entrepreneur, said the ability to articulate complex thoughts and ideas cogently and comprehensively is instrumental in marketing and business. He noted that while he enjoyed sales and making deals “it all had to do with wanting to build something.” His greatest enjoyment, he said, lies not in dealing with the operational details of the business, but in nurturing the company’s growth.

A networking session with students and the alumni participants followed the panel.