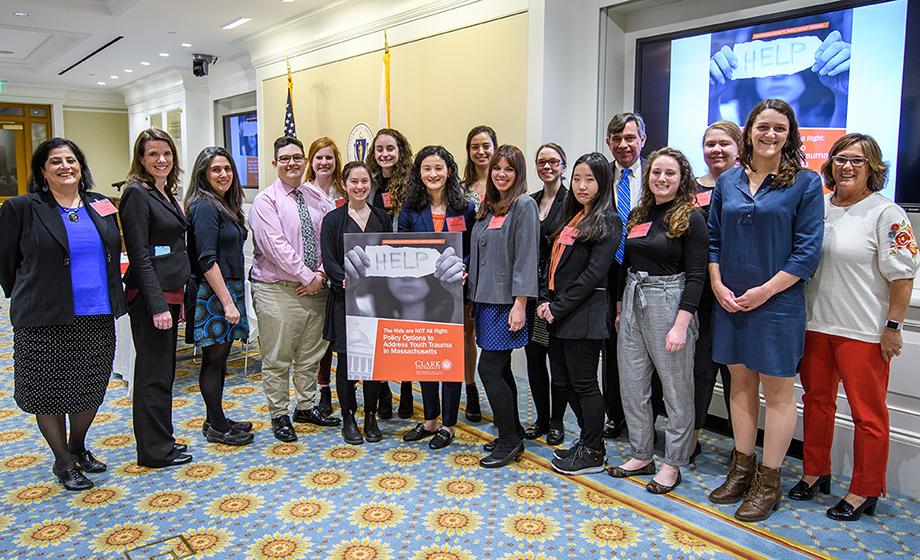 Clark research was front and center at the ninth annual event, with presentations by three faculty, including Laurie Ross ’91, M.A. ’95, associate professor of community development and planning, and Marianne Sarkis, assistant professor, both of the International Development, Community, and Environment (IDCE) Department, and Denise A. Hines, director of the Massachusetts Family Impact Seminar and associate research professor of psychology.

Hines and James Gomes, director of the Mosakowski Institute, organize the annual event. Gomes credited Hines with approaching him a decade ago to suggest that Clark sponsor the Family Impact Seminar, a national program, in Massachusetts. As in years past, students in Hines’ Social Science Research to Influence Public Policy class researched issues, communicated with legislators, and helped stage the event.

In her welcoming remarks with state Rep. Lori A. Ehrlich, state Senate President Harriette Chandler, M.A. ’63, Ph.D. ’73, spoke of the seminar’s impact. “Clark University’s research and work for their Family Impact Seminars is extremely helpful in guiding our public-policy efforts here in the Legislature,” Chandler said. “With these seminars, Clark is delivering toolsets and strategies with which we can effect positive change in the lives of children and families across the Commonwealth.”

Below are summaries of the three presentations for “The Kids are NOT All Right: Policy Options to Address Youth Trauma in Massachusetts” on March 28.

“Early Trauma as a Risk Factor for Youth Violence: Policy Options to Break Generational Cycles of Violence,” by Laurie Ross

According to the U.S. Centers for Disease Control, in 2014, homicide was the third leading cause of death for youth ages 10 to 24 in the United States, and over 500,000 youth were treated and released from emergency departments for non-fatal injuries from assaults.

These homicides and assaults are rooted in children’s exposure to community violence, family violence and trauma, and overall “adverse childhood experiences” (ACEs), such as abuse, neglect, and household dysfunction.

But what is the connection between children’s early exposure to violence and trauma and their becoming adult perpetrators of violence? Their developing brains, according to Ross.

“What is going in a developing child’s brain? It’s a time of incredible growth, incredible elasticity,” Ross said. “Their brains are building capacities that reflect patterns that they’re exposed to on a regular basis. If their home is filled with speech, their brain is wired for speech. If it’s music, it’s wired for music. If it’s violence and neglect, their brain gets wired for that as well.”

When a child is exposed repeatedly to extreme violence and trauma — without the “buffering” of helpful, caring adults — they experience “toxic stress response,” leading to impaired brain and biological development, she said.

As a result, children succumb to stress-related disease and cognitive impairment; their fear response can be triggered more easily, their academic performance decreases, and so does their impulse control.

“These children are always ready for fight or flight,” Ross said.

Teens who experience these neurobiological changes are prone to bullying and committing violence against peers and dating partners; as adults, they are at risk of committing child abuse and domestic violence.

As an example, she pointed to Worcester ACTs (Addresses Childhood Trauma), an intervention program that “brings to life the core principles” connecting a family experiencing trauma with a community health worker.

“Gaps, Best Practices, and Challenges in Responding to Sex Trafficking,” by Marianne Sarkis, who also is program coordinator of the Henry J. and Erna D. Leir Community and Global Health Program

Illegal sex trafficking is one of the fastest growing and most profitable industries in the world, pulling in $150 billion a year, surpassing gun and drug trafficking, according to Sarkis.

“This is a global market fueled by demand for prostitution and engagement in illicit sex, especially with minors,” she said. “It’s funded by a supply-demand chain that spans the globe, and is coordinated through a very sophisticated cyber network. It’s very difficult to oppose or obstruct.”

Some 21 million people are victims of trafficking worldwide, 55 percent of them children, and 99 percent, women and girls, according to Sarkis. Up to 17,500 people are brought to the U.S. for sexual exploitation each year. In the U.S., as many as 300,000 12- to-14-year-old girls are at risk of being sold for sex each year. Boys and transgender youth are at risk as well. About 95 percent of those in prostitution were sexually assaulted as children. Runaways and homeless youth are especially at risk.

“Ninety percent of women in prostitution want to leave immediately, but feel they have little or no options,” she said. “This goes against the traditional argument that people are choosing this lifestyle. No one grows up saying they want to be a prostitute. Something happens to them along the way. And this relates to childhood trauma.”

Statistics for Massachusetts are difficult to pin down, with the only data available from calls made to the National Human Trafficking Hotline, she said. Since 2007, the hotline has received more than 2,000 calls from Massachusetts, with 490 cases of sex trafficking reported.

For Worcester, Sarkis has analyzed data from police reports, outreach logs, and a drop-in center serving women seeking help from an organization called Living in Freedom Together (LIFT). The Worcester-based survivor-led organization provides resources, advocacy, and support to empower individuals to exit and recover from the impacts of commercial sexual exploitation. She uncovered these statistics about sexually exploited women in Worcester: 97 percent have a substance use disorder; over 60 percent are homeless or have no stable housing; 14 died from overdoses in the last two years; and most are re-arrested at least once for prostitution, often within days of release from jail.

The barriers for women to leave prostitution include their substance use disorders and lack of available treatment beds; chronic homelessness; inadequate education and job skills; lack of positive social support; a lack of knowledge about available resources; and, most importantly, programs that simultaneously address all of these issues, especially their history of trauma and substance use.

“Systems coordination across the state is essential,” she said, “and we need to shift from a law enforcement approach to a public health approach that understands the underlying root causes … instead of treating them like criminals.”

“Sexual predators prey on the vulnerable,” Hines said. At college, those victims include 18-to-22-year olds who are new to campus, isolated, or emotionally unstable, and who also might drink heavily.

“Very few men engage in behaviors that are consistent with the legal definition of rape or attempted rape,” she said. “The vast majority of these assaults are non-stranger assaults. … They are not occurring with dates, they’re occurring with acquaintances – people that the guys meet at parties, at bars, in social situations.”

About two-thirds of perpetrators are serial offenders, according to studies.

“These are not accidents; these are not ‘he-said, she-said.’ People are committing these over and over,” Hines said.

In an academic year, nearly 5 percent of college women will be victims of rape or attempted rape, and about 20 percent will be sexually assaulted at some point in their college careers, according to Hines. Victims experience physical injuries and mental trauma, and their academic work suffers as well. They are more likely to drop out of college.

As the 2015 documentary “The Hunting Ground” and a report by the Center for Public Integrity made clear, many institutions “actively act to shroud the problem,” she said.

Colleges are reluctant to confront the issue because they don’t want to be the first to do so, Hines said. If they do, sexual assault victims will come forward to report crimes, and those crimes must be posted on the college’s website.

Colleges also fear false reports, but studies show that’s prevalent in only 2 to 8 percent of cases, no different from other crimes. Underreporting is more of a problem than false reporting, Hines noted.

To prevent sexual assaults, colleges like Clark have adopted programs that train bystanders to intervene, and also have conducted campus climate surveys to identify ways to proactively address the issue.

Legislators in Massachusetts also are taking action. Hines noted two bills working their way through the State House: the Campus Sexual Violence Prevention Bill, which proposes state-level policies for higher-education institutions to establish fair procedures, appropriate tools, and training in the state’s colleges and universities; and the Act Creating a Sexual Assault Climate Survey for Massachusetts Colleges and Universities, which would set up a task force to create a survey mandated to be used by higher ed institutions.