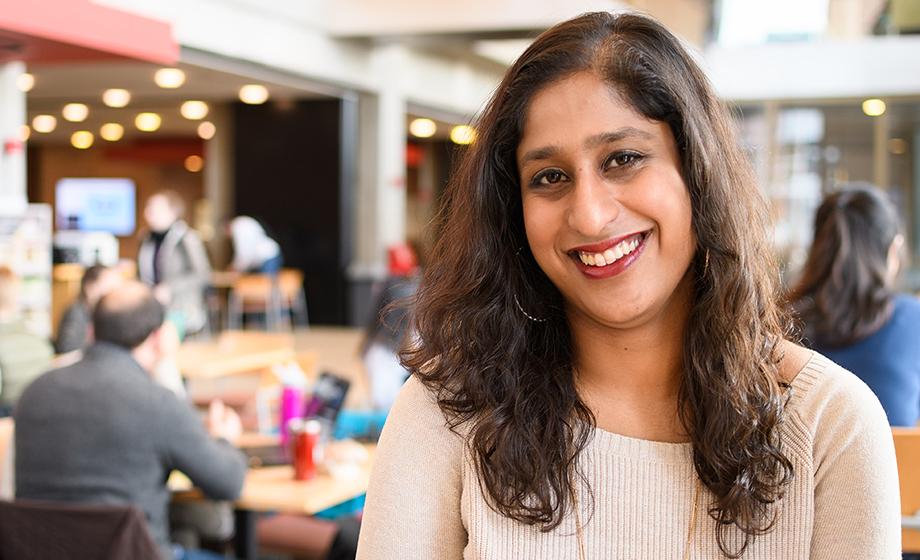 Some unsung heroes are the ones behind the camera. Krithi Vachaspati ’18, a photographer for Clark University’s student newspaper, The Scarlet, and a social media outreach coordinator for Clark’s Amnesty International chapter, is looking to reframe the big picture by helping shape public policy and law in the areas of immigration and refugee resettlement.

Living with a bicultural identity as an Indian-American, and having grown up with parents who have friends from around the world, Vachaspati thrives in Clark’s diverse environment. In addition to her upbringing, her curiosity and interest in global issues led her to major in international development and social change (IDSC) and minor in French and Francophone studies.

“My favorite part about being a student at Clark is being able to apply all of my interests in different areas of my college experience,” Vachaspati says. “Because I’m an IDSC major, I apply what I learn in classes to my work with Clark’s Amnesty chapter, advocating for human rights. I also get to take photos for The Scarlet and other events on campus. Lastly, I use all three languages I speak (English, Hindi, and French) almost every day. It’s so amazing to be openly proud of who I am and to have people embrace it.”

Over the past two summers, Vachaspati also has applied what she’s learned to three internships: at the National Peace Corps Association (NPCA) and the Tom Lantos Human Rights Commission in Washington, D.C., in 2017 and at an orphanage for girls in India in 2016.

At the NPCA, she used grassroots outreach to strengthen the organization’s relationship with current and prospective donors. She also conducted research for the NPCA’s efforts involving its partner, Water Charity, and wrote summaries about Peace Corps development projects for the organization’s website.

“Overall, I had a really eye-opening experience interning at NPCA, and I learned many useful skills that will help me in the future,” she says.

For the congressional commission, co-chaired by U.S. Reps. James P. McGovern, D-Mass., and Randy Hultgren, R-Ill., Vachaspati worked on efforts to raise awareness about human rights violations, free political prisoners around the world, and advocate for changes in foreign policy. She researched and wrote a memo addressing human rights issues in Bangladesh. At the request of the State Department, she wrote a press statement in response to the arrest of the director of Amnesty International Turkey.

“I got to cover a meeting for the commission in which I represented the Democratic Party,” Vachaspati says. “I also got to listen to speeches by a lot of important politicians, like Nancy Pelosi (House Minority leader), Congressmen Jim McGovern, and Madeleine Albright (former secretary of state).”

The experience solidified Vachaspati’s interest in furthering human rights around the world, and she says her Clark education already has benefited her in this endeavor.

“The most important skill I learned at Clark that helped me excel in the work I was doing was having a critical mind,” she says. “If I wasn’t able to be critical of myself and the organizations I was working for, and just passively took part in work I didn’t agree with, then I don’t think I would have been able to think about how that work could be done differently in the future.”

Her work in 2016 brought her face-to-face with the people she was benefiting. She taught English to 36 orphaned girls at Jyoti Sarup Kanya Asra, a non-governmental organization in Kharar, Punjab, India.

In each internship, “I learned that meaningful work can be done through many different lenses, and that even if I didn’t see the immediate results of the changes that the organizations I was working for were making, I was able to see the long-term benefits,” she says.”

After she graduates from Clark this May, Vachaspati hopes to work full time in international development or policy. “I’d love to work abroad for a while and then go to grad school to get a degree in public policy, or potentially go to law school and study immigration law.”