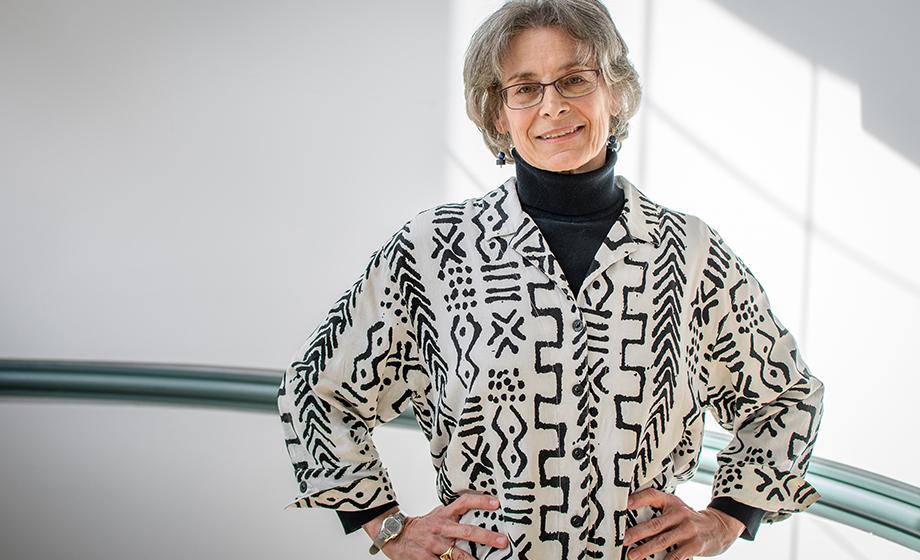 Clark University Education Professor Sarah Michaels has been selected to receive a Lifetime Achievement Award from the American Educational Research Association (AERA), the largest national interdisciplinary research association dedicated to the science of education and learning.

This prestigious award is presented to a researcher in recognition of Distinguished Contributions to Social Contexts in Education Research. Michaels will receive the award at the 2018 AERA Annual meetingthis month before an audience of approximately 15,000 members, scholars, policy experts, and practitioners.

Michaels is an internationally renowned discourse analyst and sociolinguist who has spent her career studying the ways in which language, culture, and knowledge intersect in urban classrooms. She was part of a group of scholars from the United States, Britain, and Australia who developed a theoretical framework of “multiliteracies.”

In nominating her for this award, Clark Education Professors Eric DeMeulenaere and Jie Park prepared a letter citing Michaels’ years of commitment to urban education and linguistics research.

“Professor Michaels’ earlier work on children’s discourse patterns in classroom ‘sharing time’ is read in almost every graduate program in educational linguistics and literacy studies in the U.S.,” the letter reads. “For the past 35 years, she has changed our paradigms about language, culture, and teaching and learning in urban schools.”

“Professor Michaels’ work with teacher researchers has helped teachers to understand and take action to improve the day-to-day lives and futures of students, and engage in critically complex problems of practice. That is, in promoting teacher research, Professor Michaels has transformed the contexts under which adults teach and young people learn.”

Before coming to Clark in 1990, Michaels served as director of the Newton, Massachusetts-based Literacies Institute, which was funded by the Mellon Foundation, and directed projects on language and schooling while serving as a research associate and instructor at the Harvard Graduate School of Education.

Michaels co-authored an award-winning book, “Ready, Set, Science!: Putting Research to Work in the K-8 Science Classroom,” for the National Research Council and co-authored a CD-ROM suite of tools, Accountable Talk: Classroom Conversation that Work, which has been used in large urban districts throughout the country.

She is the founding director of Clark’s Hiatt Center for Urban Education; she also helped found two interdisciplinary majors, cultural studies and communication, and community, youth, and education studies, the latter of which has been recognized by the Association of American Colleges and Universities as a “Civic Responsibility by Design” model in education. Michaels also is affiliated with Clark’s Urban Development and Social Change Program.

Since 2013, Michaels has been a part of a national research, design, and implementation effort to introduce the Next Generation Science Exemplar (NGSX), a web-based resource for teacher education and professional development for K-12 science educators. The NGSX project has been presented at more than a dozen national and international conferences; it has garnered over $1.5 million in grant funding from the National Institutes of Health and the National Science Foundation, and has been featured in two refereed publications in highly ranked journals as well as in Education Week. It is currently is being used in 12 states.

In addition to her research, Michaels mentors junior scholars, postdocs, and graduate students, encouraging them to collaborate with her during their time at Clark or later in their careers.  Many of the doctoral students and postdocs she has mentored — some of them “virtually” —have secured positions in urban education with prestigious fellowships; nearly all of them continue to collaborate with her through weekly and monthly online meeting sessions.

“I am deeply humbled and honored by this award,” Michaels wrote upon being notified of the award. “I will do everything in my power to pay it forward in all I do with students, teachers, and colleagues, to live up to the commitment to equity and social justice that Division G-Social Context in Education stands for.”