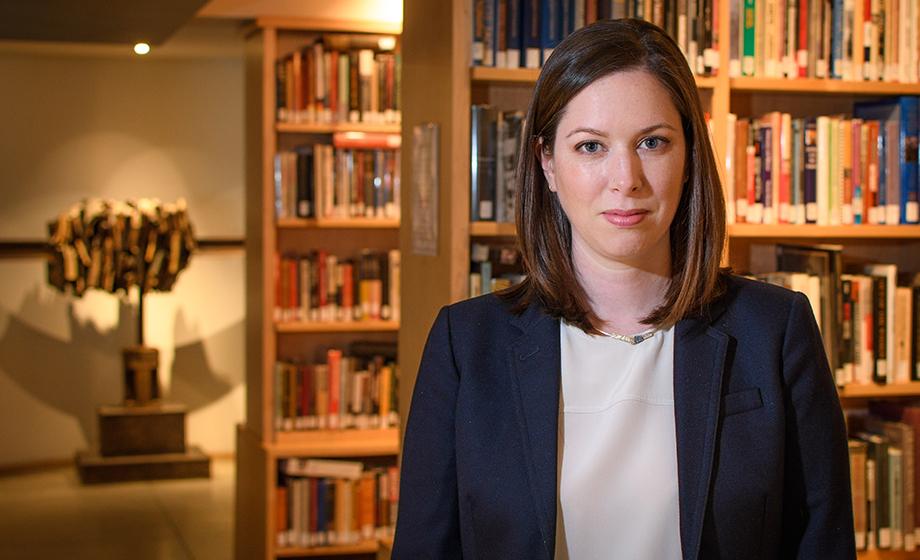 Salvation Army bell ringers with their kettles are a familiar sight around the holidays in the United States, and their charitable work is well known, but few are familiar with a dark chapter in the organization’s history. Rebecca Carter-Chand, visiting professor at the Strassler Center for Holocaust and Genocide Studies at Clark University, delivered a public lecture on March 1 that explored the Salvation Army’s origins as a charitable Christian mission in 19th-century England, its international growth, and how its German chapter operated during the Nazi period.

Carter-Chand (pictured), who earned a doctorate from the University of Toronto in 2016, researches Christian minority groups in Nazi Germany and their international networks during the 1930s and ’40s.

She opened her talk, “Soldiers for Christ in Hitler’s Germany: The Salvation Army and the Nazi State,” with an image published on the front page of a Salvation Army newspaper. The photo depicted the London-based Chalk Farm Band performing in Berlin in September 1936 to commemorate the 50thanniversary of the German branch of Salvationists, the Heilsarmee, and showed Nazi and Heilsarmee flags, as well as a prayer for “Führer, Volk, Vaterland, and world peace.” The picture led Carter-Chand to question how the Heilsarmee reconciled its profile as a Christian organization dedicated to justice and helping the poor with its operation in Nazi Germany.

Carter-Chand noted the Salvation Army was not committed to pacifism, as were the Quakers who also operated in Germany, and it aimed to remain neutral and above politics. During World War I, the German Salvation Army chapter separated from the parent organization and solidified its national identity as it continued with significant relief efforts. These steps helped the chapter become increasingly German in outlook and function, she said.

During the Weimar period, the Heilsarmee expanded its charitable works in Germany and built up social capital as a humanitarian group, she said. With the Nazi rise to power, the Heilsarmee enthusiastically supported Hitler, as did other smaller churches. What is more, General Evangeline Booth, the London-based daughter of the founders of the Salvation Army, sent a conciliatory telegram to Hitler to help safeguard the group’s activities, Carter-Chand said.

The Heilsarmee was not the only minority Christian group that accommodated themselves to the new political landscape, she said. Demonstrations of national loyalty allowed smaller churches to carry on, and the illusion of religious freedom they suggested helped Hitler promote a positive message abroad.

Carter-Chand highlighted the concept of the Volksgemeinshaft (people’s community) as a means of understanding the position of the Heilsarmee in Nazi society. Rather than viewing the church as either pro- or anti-Nazi, she explained its relief work in the context of welfare efforts that excluded Jews and other groups understood to be outside of the Volksgemeinshaft. In advancing this line of reasoning, Carter-Chand acknowledged the scholarship of Thomas Kühne, co-director of the Strassler Center.

Carter-Chand questioned how Salvationists made sense of their association with the Nazi state. What did they know during the war and after? Those kinds of questions underlie another project she has championed in her course, “Rescue and Resistance,” in which her students are investigating what Americans knew about the Holocaust as it was unfolding in the 1930s and ’40s. This initiative, part of a nationwide project at the United States Holocaust Memorial Museum called “History Unfolded,” asks people to research local newspaper coverage of Holocaust-related events and to add news articles to a growing online database.

Carter-Chand’s students have researched newspapers in Worcester and surrounding towns. Their findings suggest links between local history and global events that are the subject of a talk she will give at 4 p.m., April 10, in the Saxe Room of the Worcester Public Library