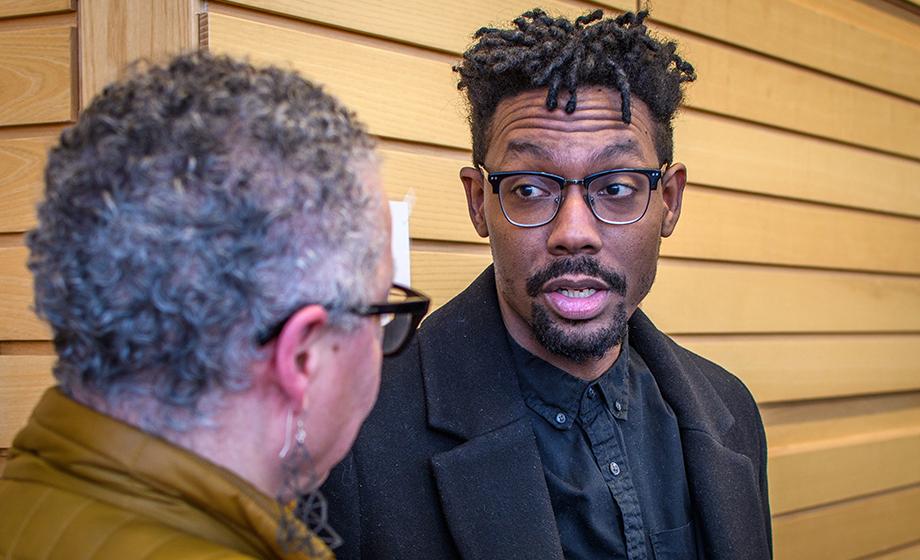 Filmmaker Damon Davis was in Ferguson, Missouri, during the protests that followed the 2014 fatal police shooting of unarmed 18-year-old Michael Brown. He had an idea for a film, but initially didn’t bring a camera with him onto the streets. For the St. Louis native, the city in turmoil was not only a subject for a documentary — it was home.

“I was in a place to speak for my community, and that’s what I did,” Davis told an audience in Clark University’s Razzo Hall following a screening of “Whose Streets?,” an account of the Ferguson protests co-directed with Sabaah Folayan.

The event was sponsored by the Screen Studies Program; Media, Culture, and the Arts Program; Center for Gender, Race, and Area Studies; and Clark University Film Society.

From the Razzo stage, Davis recalled how he and Folayan built camaraderie with a core of Ferguson residents, who gave the filmmakers access to their personal lives. “Whose Streets?” juxtaposes intimate family moments with footage of the protests that erupted after Brown’s shooting.

Davis said he wanted to tell a deeper story than what was being portrayed by the media, whose excursions into Ferguson he likened to “safaris.” The film’s personalized nature was not meant to generate empathy, he said, but to “make a mirror that people have never seen themselves in.”

During a question-and-answer session, Davis noted it can take generations before matters of racism and inequality provoke a public response.

“I’m not hopeful it’s going to get better, but I hope it does,” he said.

“I’ve been uncomfortable my whole damn life — that is my comfort zone,” he said. “I’m just trying to level the playing field.”