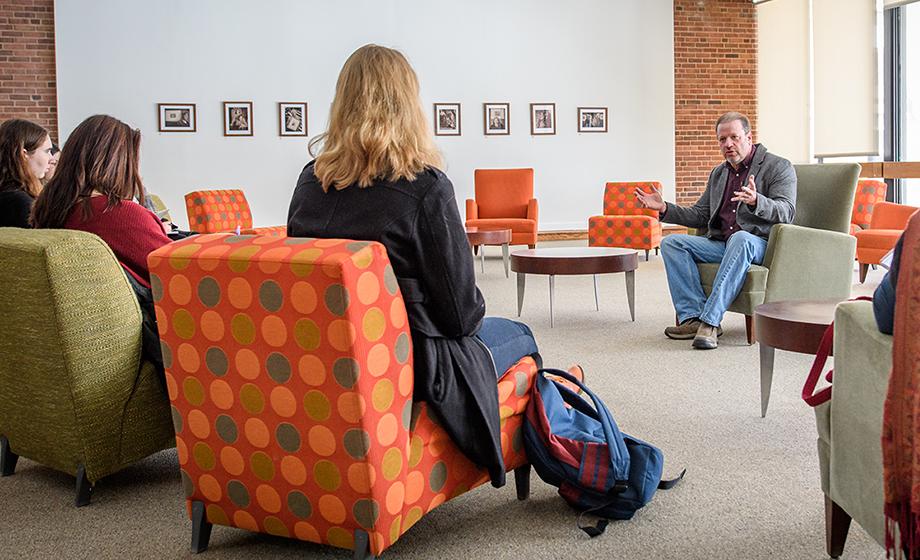 John Morano ’82 returned to campus for the English Department’s Alumni Lecture Series, reflecting on his career as an environmental journalist, in a March 15 talk titled “Giving Voice to the Voiceless” in Dana Commons’ Higgins Lounge. He also presented a workshop for student writers and sat for an interview with Davina Tomlin ’20.

“There’s a journalistic ethic that says, ‘Give a voice to the voiceless.’ That’s what I’m trying to do,” Morano said. “If you buy into that ethic, and I do, then who is more voiceless, more in need of having their story told, than an endangered species, or an imperiled habitat? They cannot speak for themselves. They cannot hire public relations agencies. And they will disappear if no one knows their story. And so, what better way to tell their story than through their eyes?”

Morano graduated from Clark with a double major in English and film (now screen studies), and worked as a film critic for the student newspaper The Scarlet. As a graduate student in mass communication/journalism at Pennsylvania State University in the mid-1980s, he began searching for a story for what he hoped would be his first book.

He found that story on a spring break trip to his parents’ home in Florida, where he watched a TV news story about a hamster species on the brink of extinction.

“That’s when I knew what my book would be: extinction. What could be more dramatic? What could be more timely? What could be more important?” he said. “And then I realized that we were talking about a hamster here. It would take me 300 pages to move it across the room. I decided that I needed a different animal, a bird perhaps. Then I could make the story global through migration. A sea bird, because I grew up on the beach, in the bays. It was something I knew a little about.”

Morano’s first novel, “A Wing and a Prayer” (1993), tells the story of Lupé, possibly the very last Guadalupe petrel.

Since then, he has told many more stories about “voiceless” nonhuman characters. His passion and love for his work has resulted in three more novels in The John Morano Eco-Adventure Series: “Makoona,”“Out There, Somewhere,” and the soon-to-be-released “Flocks of One.” He is currently working on his fifth book in the series, which has been endorsed by the World Wildlife Fund, The Nature Conservancy, The Ocean Conservancy, and the American Society for the Prevention of Cruelty to Animals.

Morano encouraged students to follow the career paths that fulfill their passions and to do what they feel is right.

“Someday, someone will ask you: ‘What did you do with your life?’ Here is what I don’t want to say: ‘I wrote ‘Natural Born Killers’ and made 10 million dollars.’ That’s not where my head is,” Morano said. “What I’m going to say is: ‘You probably have never heard of me. But I wrote 10 books about endangered species. Cash me a check, please.’ ”

In addition to his writing, Morano has been a journalism professor for nearly 30 years at Monmouth University. He has won five consecutive Student Choice Awards, and he is adviser to the school’s award-winning newspaper. Before Monmouth, he spent five years at the helm of several magazines, including Inside Books (senior editor), ROCKbeat (editor-in-chief) and Modern Screen (managing editor).