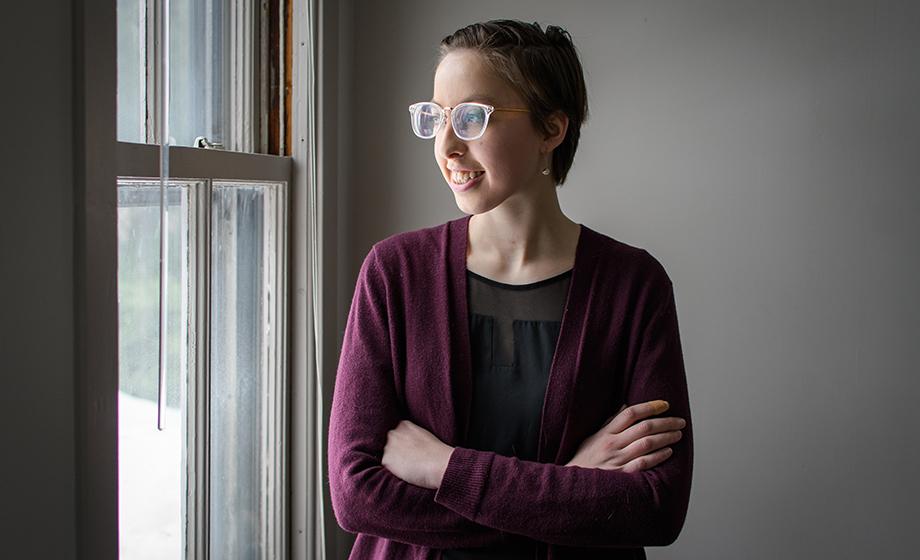 In her three years here, the art history/ancient civilization double major has indulged her curiosity and demonstrated her talents and passions in ways that span multiple disciplines.

This kind of workload would be daunting for anyone, but Armstrong has learned to manage. “I need to pursue projects that keep my interest,” she says.

Last spring, Armstrong took History Professor Janette Greenwood’s “Public History: Race, Photography and Community,” a Problems of Practice seminar. The course focused on a collection of formal portraits taken by photographer William Bullard at the turn of the last century depicting the African-American community in Worcester’s Beaver Brook neighborhood. The course culminated with a fall exhibition of many of the photographs at the Worcester Art Museum, which the student researchers helped organize and stage.

Armstrong’s research focused on the genealogy of the Perkins family, who sat for portraits taken by Bullard.

“During the course, and a subsequent directed study, I identified and connected over 100 family members from the last 200 years, though there are many more I haven’t yet found,” she says. During the summer, Armstrong found the site where two of her subjects were laid to rest. “It was so moving to stand at the foot of their grave, and know that they were so much more than their photographs could begin to capture.”

That love for exploration has taken Armstrong down many avenues, particularly in the arts and humanities. Consider her fall semester. In addition to continued work on the Bullard exhibition, she:

“I acted in Playfest and helped with costumes in the fall of my freshman year, and I fell in love,” Armstrong says. “I loved creative writing when I was younger and dreamed of my own work being produced. [Theatre] Professor Gino Dilorio’s playwriting course inspired me to write my play.” The play earned second prize honors in the Loring Holmes and Ruth Dodd Drama Contest.

Armstrong’s interests have motivated her to pursue interests off campus as well. A member of the College of the Holy Cross’ Manuscripts, Inscriptions, and Documents Club, she has worked with team members to make a handwritten, 10th-century work searchable via computer. Their work is the foundation of a musical notation’s encoding system in a digital format. “No one works alone; I’m part of an incredible group of people on this project,” she says.

Armstrong came to Clark in search of independence and opportunity. She found both, and then some.

“I think the strongest element of my Clark education is how completely interdisciplinary it has been, both of my own design and because of Clark’s structure,” she says.

“My time at Clark has encouraged me to challenge myself, and to build connections with people around me to help build my future,” she adds. “The most important thing I’ve learned so far is that I will never stop learning, and that with drive, I can make almost anything happen.”

Rosie Nguyen ’19 contributed to this story.