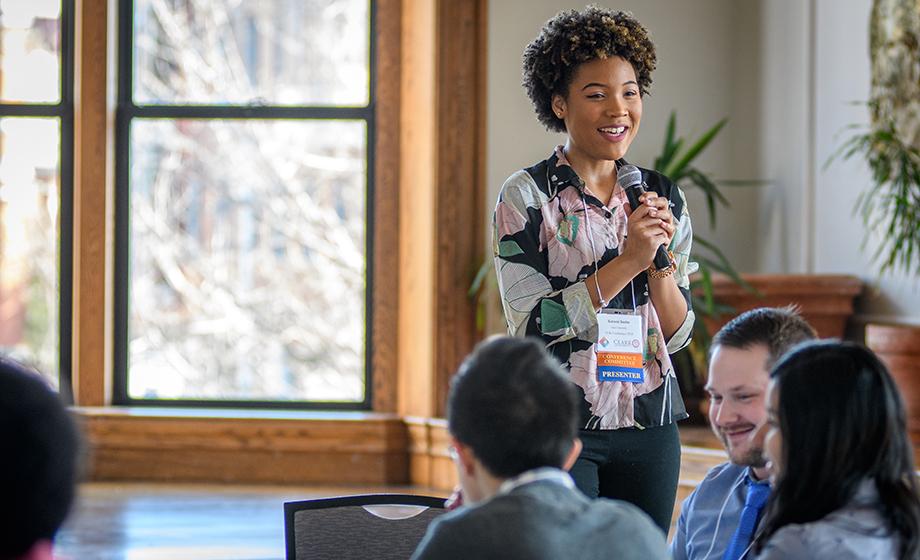 Editor’s note: Kaiomi Inniss ’19 chaired the sixth annual Third Culture Kid and Global Nomads Conference at Clark on Feb. 24, and co-led a workshop, “Picking Up the Crumbs: An Exploration of Food Politics in the Lives of TCKs,” with Chikondi Thangata ’20. Below, Inniss reports on the day’s events.

The question, “Where are you from?” should be simple to answer — unless you’re a TCK.

TCK stands for Third Culture Kid and describes the experience of living outside the culture of one’s parents or passport country. Usually marked by constant moving and travel, many languages, and, sometimes, multi-ethnic identities, the TCK experience is unique, yet in a rapidly globalizing world it’s becoming more commonplace.

The TCK identity can be confusing. You may feel as though you’re not being entirely truthful when you answer the question “Where are you from?” with one country, yet you feel like a show-off when you name all of the countries you consider to be “home.” In fact, “home” itself becomes a confusing concept.

Recognizing this challenge, TCK students at Clark University created the first TCK and Global Nomads Conference in 2013. Every year, the conference hosts students and professionals, both TCK and non-TCK, from Clark, and schools around New England like WPI, Rhode Island School of Design, and Babson College, among others.

The sixth annual Third Culture Kid and Global Nomads Conference was held at Clark on Feb. 24. The theme, “Finding Peace within the Pieces,” was established to explore different ways in which TCKs come to terms with the various segments of their complex identities.

This year’s keynote speaker, Anita Fábos, associate professor of international development and social change, discussed refugee and migrant issues, particularly as they pertain to TCK groups. As the mother of a TCK daughter, she highlighted the challenges and joys of raising such a child.

“[Fabos’ speech] is important because it helps everyone understand the different intersections of being a TCK,” said Chikondi Thangata ’20, who is British and Malawian, and has lived in the United Kingdom, Malawi, Kenya, Mozambique, Ethiopia, and the United States.

Thangata co-led a session titled “Picking Up the Crumbs: An Exploration of Food Politics in the Lives of TCKs.” Other sessions included “The TCK Spectrum” by WPI student Trung Tran Trong and “Battling to Reclaim Heritage and Navigating Privilege” by Kaitlyn Wilson of Boston College. An alumni panel was hosted by Farah Weannara ’16, who was 2017 conference chair, and Melina Toscani ‘17.

Said attendee Ashleigh Nongogo ’18, who is Kenyan and South African, and has lived in Zimbabwe and the United States, “My hope is that this conference not only grows but also inspires more of its kind across the globe.”