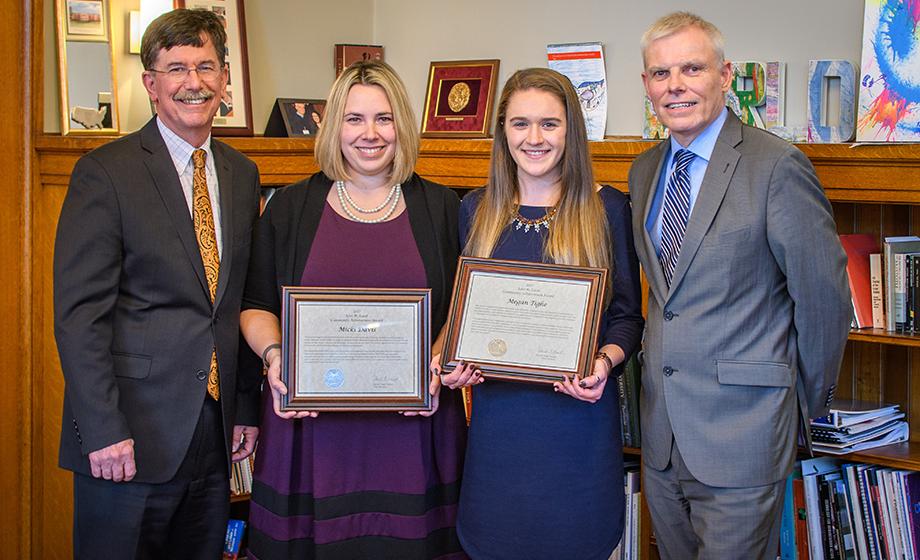 “You have exemplified what Jack Lund wished to celebrate with members of the Clark community providing leadership in the Worcester community. ”

Davis has served on the Board of Directors of the YWCA Central Massachusetts since 2006 and currently serves as board president. Davis’ leadership has kept the organization focused on its mission of “eliminating racism, empowering women and promoting peace, justice, freedom and dignity for all.” She helped create strategic plans for racial and gender justice for early care and education, wellness and health equity, and women’s economic empowerment and domestic violence services. She also provided strategic planning for leadership continuity and improved governance for the organization.

In addition, Davis is a member of the United Way of Central Massachusetts’ Women’s Initiative, and has represented Clark in the community through programs such as Leadership Worcester.

President Angel and Jack Foley, vice president for government and community affairs and campus services, met with Tighe and Davis last month to present the awards.

“You have exemplified what Jack Lund wished to celebrate with members of the Clark community providing leadership in the Worcester community. Your leadership for the YWCA and your service as board chair during this critically important time for the YWCA and our society has been transformative,” President Angel told Davis.

Davis has worked in community engagement at Clark since August of 2005. She received her Master of Public Administration from Clark in 2009; she currently is working toward a doctorate in education and organizational leadership at Northeastern University.

Tighe was honored for her longstanding commitment to and support of St. Peter’s Church, where she has mentored and tutored young students in an afterschool program since 2013. Tighe recently helped create a literacy curriculum for students in the program, and she has recruited, trained, and managed student volunteers from Clark.  Tighe has also served as an intern at the Worcester Education Collaborative.

“We know how valuable your commitment and accomplishments have been to these children from the many accolades from the people administering the program at St. Peter’s Church,” President Angel told Tighe when she received the award. “You have made Clark’s neighborhood your new home and our community and our children are very appreciative.”

Tighe earned her B.A. from Clark in 2017; she majored in International Development and Social Change and minored in Spanish. She is pursuing her master of arts in teaching through Clark’s Accelerated B.A./Master’s Degree Program and expects to complete her degree in May.  She plans to use the cash prize that comes with the Lund award to establish herself in a school district this year.

“I love Worcester and I love the work I do here with local organizations to create a stronger, safer community,” said Davis. “This award is also meaningful [to me] because I remember Jack Lund; he was a passionate advocate for Worcester and education.”

The John W. Lund Clark Community Achievement Award recognizes the contributions made to the Worcester community by faculty, students, or staff members at Clark University. It is the result of a generous gift to the Greater Worcester Community Foundation by Jack Lund, who was a retired chief executive officer of the S&S Paper Company and the New England Envelope Manufacturing Company. Mr. Lund had been a generous supporter of Clark University and an active member of the Friends of the Goddard Library, and he had audited classes at Clark for more than 20 years.