Scholar, choreographer and Clark University Visual and Performing Arts adjunct professor Lynn E. Frederiksen ’79, M.A.’82, has a lifelong passion for dancing across cultures — an interest that led her to co-write a one-of-a-kind multimedia resource on Chinese dance.

As a native of St. Croix with Danish, African, Irish and possibly Carib Indian roots, Frederiksen started with Irish step dancing at age 12, then learned ballet, Afro-Caribbean, and modern dance in high school. As a student at Clark, Frederiksen co-founded the Clark Dance Society and continued informal dance studies. After graduation, she added classical dance of India to the mix.

Her academic work at Clark, however, centered on one of her other interests: nature. She graduated with a B.A. in biology and a master’s in environmental affairs.

Frederiksen worked for several years at the Massachusetts Water Resources division, then “made a U-turn” in her career. She and her husband, John A. Minigan ’81, left their respective jobs to attend graduate school at Smith College, where Minigan completed a master’s in playwriting while Frederiksen earned an MFA in dance.

“I have a progressive hearing loss, and my hearing plunged precipitously in the mid-1980s,” she says. “I realized that if I were ever to do anything with dance and music, I’d best do so while I still had some hearing.”

“For most students, their initial concept of Primus’ signature Fanga dance — which is based on a welcome dance from Liberia — is that it’s fun to do, but they don’t understand the layers of meaning in the motion,” she says. “In African aesthetics, form itself carries meaning and cultural resonance, quite apart from the content of a work – a concept often foreign to Western culture.”

Much like how Primus introduced African dance to America, Frederiksen and her friend and collaborator, Shih-Ming Li Chang, chair and associate professor of theatre and dance at Wittenberg University, are helping Westerners understand and appreciate Chinese dance. Their book, “Chinese Dance: In the Vast Land and Beyond” (Wesleyan Press, 2016), stems from 20 years of research, interviews and videotapes of dancers and scholars in China and Taiwan.

The authors met at Smith College’s MFA in Dance program in the mid-1980s, where Frederiksen helped Chang — who was relatively new to speaking English — with writing her thesis. The common ground of dance allowed them to overcome barriers of language and of Frederiksen’s hearing loss, and set the stage for their later collaborations.

Once they graduated, they fell out of touch until the late 1990s, when Frederiksen was teaching dance at Tufts University. Chang contacted her to help write a grant for a project to videotape Chinese dance artists and scholars abroad.

“She wanted to share with Western students the historical and cultural context of the Chinese dances they were studying,” Frederiksen says. “There was nothing available in the United States, so she traveled to China and Taiwan.”
Over time, their video project grew into a book.

“It became clear that the video format — though ideal for presenting dance — could not do justice to the historical and political contexts that make Chinese dance so intriguing,” Frederiksen writes in “Chinese Dance.” 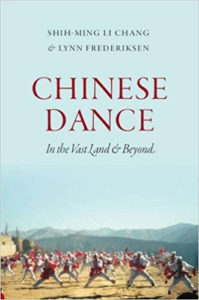 The authors’ book and annotated database is the only resource of its kind in English, allowing Western readers to study Chinese dance, from ancient to modern.

Their book “uses dance as a prism on Chinese culture, on the factors at play, on the assumptions that come into being, so that you can examine these and see the dance for what it is, not what you think it must be.”

When shaping the rationale for the book, Frederiksen found ways to incorporate her research on the role of performing arts in bio-cultural evolution, and also tapped into these concepts for her “African Inspirations” class, which she first developed at Tufts University.

After teaching dance at Tufts for 15 years, Frederiksen returned to Clark as an adjunct professor. In her class, she works with a drummer, engaging the students in the “conversation” between music and dance that lies at the heart of African performance, while ensuring that she also can hear the music.

Several members of Frederiksen’s family are connected to Clark. Besides her husband, her sister, Julie A. Frederiksen ’82, and brother-in-law, Richard W. Clark ’73, are alumni. The sisters’ father, Axel Lambert Frederiksen, also had Clark ties.

“My father was the director of tropical forestry with the U.S. Forest Service in the Virgin Islands, and assisted the Clark geography researchers when they were studying microclimates on St. Croix,” she says. “It was very fortuitous that Clark had been on St. Croix, creating for me a connection that continues so many decades later.”