From 'Siddhartha' to sneakers: Alumnus discovers that knowledge and skills he learned at Clark can be applied to world of business
By Meredith Woodward King & Rosie Nguyen '19 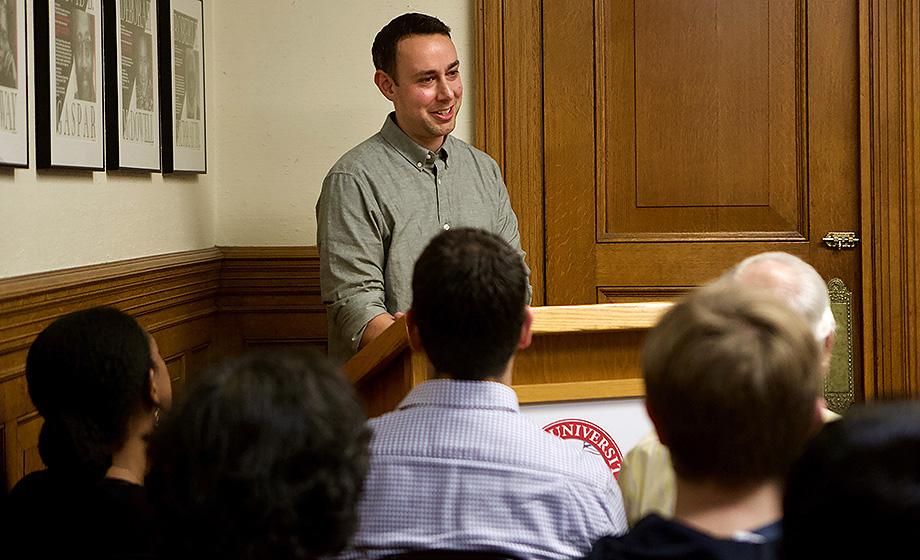 “What can you do with an English degree?” is a question that Clark University’s English Department encourages students to explore, especially by meeting with alumni who return to campus to talk about their careers. At a recent gathering in the department’s Anderson House, Scott Zimmerman ’99 relayed what happened when he paired a B.A. in English with his passion for sports, an interest he’s held since his teenage years in Brooklyn: He ended up overseeing multimillion-dollar global merchandising accounts and strategies for top brands like Nike, New Balance and Carhartt.

Starting at Clark in 1995 as a pre-medical student, Zimmerman shifted his original career goal of becoming a doctor after he took English classes and discovered a love of reading and writing about literature. In the summer of his junior year, Zimmerman visited Clark’s Career Services, hoping to find a job that fit his lifelong interest in basketball. As it turned out, the NBA was offering an internship. After submitting a story he had written in an English class, Zimmerman landed the internship and then a job in marketing, developing national TV commercials for the NBA for three years.

In 2001, his career really took off when he took a job as a global associate product line manager for Nike. He rose through the ranks, eventually becoming a merchandising director for Nike, focusing on emerging markets. He lived in Europe and traveled to more than 30 countries, learning about people and cultures. After working at Nike for 12 years, Zimmerman headed to New Balance as the director of global merchandising for about three years. Last fall, he joined Carhartt as vice president of product merchandising.

Zimmerman credited Nike and Clark for launching his career and getting him to where he is today.

“Nike was, like my time at Clark, one of those identifiable moments,” he said. “If you look at the timeline in your life, you can pinpoint certain moments that have changed your trajectory. And for me, Clark is one, and Nike is another.”

Zimmerman said his degree in English has been the foundation for his work in merchandising for global companies and brands. As a Nike marketplace strategist working with clients and consumers in 125 countries, he successfully applied the art of storytelling and listening. As the graduate of a liberal arts university, Zimmerman said, he gained a range of important and applicable skills, like critical thinking, listening and communicating, crafting narratives, and building and defending an argument.

He recalled his English classes at Clark, where he studied great works of literature that inspired him and introduced the values that he still draws from today, from Herman Melville’s “Moby Dick,” which warned of unhealthy obsessions and emphasized the importance of listening to others, to Hermann Hesse’s “Siddhartha,” which taught him to view the world from multiple perspectives.

The “toolbox” Zimmerman received from Clark has helped him navigate the many challenges he has faced in his career. He recalled the frantic experience of coordinating a delivery of uniforms to the 2006 FIFA World Cup in Germany, just before a match was to be played. “It was amazing because there were so many issues,” he said. “It was exciting and nerve-racking, but we got it done.”

Outside of work, Zimmerman is an avid runner who has completed four marathons, including the 2017 Boston Marathon, and has competed in Oregon’s Hood to Coast Relay for nine years. In 2012, he traveled to Nepal as a Habitat for Humanity volunteer, spending three weeks building houses for struggling families.