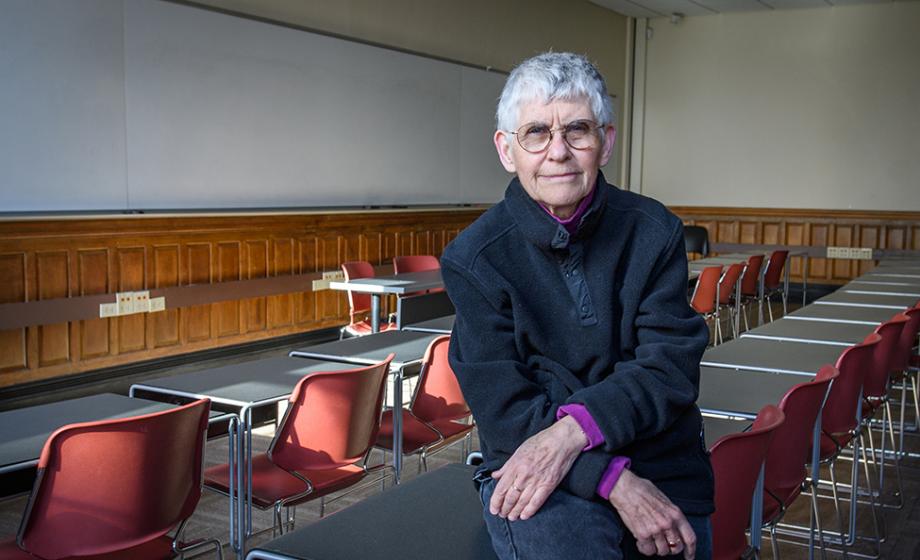 Clark University Research Professor Cynthia Enloe was selected for inclusion on the Gender Justice Legacy Wall, which was launched at the United Nations in December.

The Legacy Wall, created by the Women’s Initiative for Gender Justice in celebration of the 20th anniversary of the International Criminal Court (ICC), honors many of those who have contributed to the field of international gender justice.

“I really am humbled,” Enloe says. “I certainly am a minor figure here. So many women who are chosen have risked so much over decades to ensure that women’s rights are internationally recognized and that violators of women’s rights are held accountable and perpetrators are brought to justice.”

According to Brigid Inder, OBE, outgoing executive director of Women’s Initiatives for Gender Justice, “Those selected for the launch of the Legacy Wall are emblematic of the fields which have contributed to gender justice. The Legacy Wall is intended to be a living legacy with more names to be added at future significant anniversaries of the Rome Statute, as the gender justice field continues to evolve, as others are recognized and as future generations join and contribute to this endeavor.”

Along with Enloe, inaugural honorees include U.S. attorney and Brandeis University Professor Anita Hill, who, during Supreme Court nominee hearings for her boss, Clarence Thomas, came forward with claims of sexual harassment; Supreme Court Justice Ruth Bader Ginsberg; and the Coalition on Violence Against Women. The actual Legacy Wall will be constructed in The Hague and ultimately installed within the ICC.

“Civil society actors, academics and practitioners were consulted in the process of developing the inaugural list of honorees,” Inder says, with the board of Women’s Initiatives for Gender Justice selecting the final set of honorees.

“The work is certainly not done,” Enloe says, noting that the U.S. Senate and current White House administration have not publicly considered and ratified the Rome Statute, the international treaty that created the ICC as the first permanent war crimes tribunal. “This puts the U.S. among a mere handful of outlier countries which do not recognize the ICC,” she adds. “Our country still stands on the sidelines. However, virtually all the people recognized on this Legacy Wall have taken action when their governments have been (or are today) passive or complicit.”