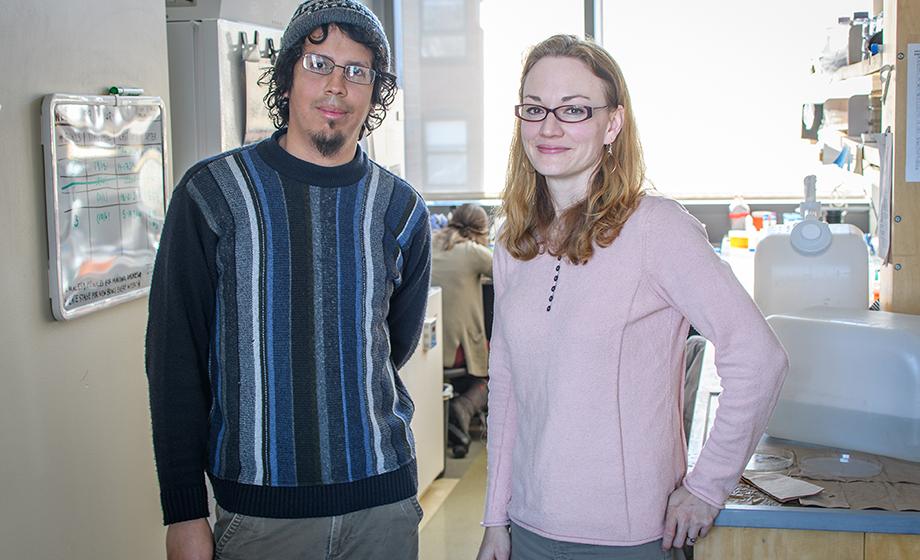 A recent article by Clark University researchers in Developmental Biology is making waves in the field — receiving shout-outs on social media — and netted an award for the paper’s first author, Allan Carrillo-Baltodano, a doctoral candidate in biology at Clark.

Carrillo-Baltodano conducts research in the lab of Néva Meyer, assistant professor of biology, who is his co-author on “Decoupling brain from nerve cord development in the annelid Capitella teleta: Insights into the evolution of nervous systems,” published in November. Meyer’s lab investigates the formation of complex centralized nervous systems in annelids, specifically a marine worm called Capitella teleta, research that recently landed her a three-year, $508,142 grant from the National Science Foundation (see related story).

In January, Carrillo-Baltodano (pictured with Meyer) presented the journal article at the annual meeting of the Society for Integrative and Comparative Biology (SICB) in San Francisco, receiving the Best Student Presentation Award from the SICB Division of Evolutionary and Developmental Biology and also by the American Microscopical Society.

Carrillo-Baltodano describes the significance of the findings in the journal article:

“Neural specification is the first step in making a nervous system. This process happens very early during development, and it involves signals telling the cells that they should become the neural tissue of the brain and nerve cord (e.g. spinal cord). When the signals come from neighboring cells, we called this conditional specification. The few animals that have been studied in detail (e.g. insects, like the fruit fly, and vertebrates like frog and fish) have conditional specification.

“We studied neural specification using early embryos of the annelid worm Capitella teleta (distantly evolutionarily related to vertebrates and insects). Dr. Meyer and I used a classic (but difficult) technique in developmental biology to figure this out — we used an eyelash to isolate cells from each other and see if they need each other’s signals to form neural tissue. We discovered that in Capitella teleta there is a dual mechanism — the nerve cord in the trunk requires signals from neighboring cells like other animals, but surprisingly the cells that make the brain can form neurons without the need of outside signals. This process is called autonomous (because cell do it on their own) specification.

“Our study is the first experimental approach that suggests that neurons in the brain are autonomously specified. This research is important because it shows us that by looking at understudied animals we can discover new ways in which nervous systems develop, ultimately giving us a better understanding of how animal diversity evolved.

“We are continuing to separate cells that makes the brain in other animals related to Capitella, to understand how this dual autonomous and conditional neural specification might have evolved.”