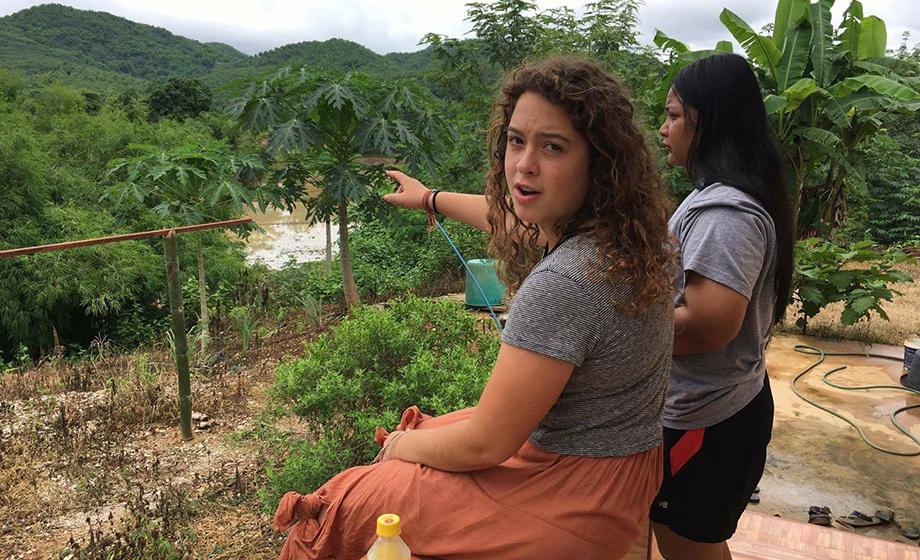 The women of Na Nong Bong, a small village in northeastern Thailand, sell hand-woven scarves to sustain themselves and raise money for their local activist organization, Kon Rak Ban Keud (People Who Love Their Hometown). They do so with a distinct purpose: to protest a mining company they say is contaminating their drinking water and food sources.

Molly Gurney ’18, an international development and social change (IDSC) major and Steinbrecher Fellow at Clark University, learned about the women — who sell scarves via the Radical Grandma Collective — and Kon Rak Ban Keud during an intensive study-abroad visit to Thailand last summer. She became so interested in how the villagers remained united and pushed back against the gold mining company that she extended her time in Thailand by a month to find out more.

Gurney, whose study-abroad program had included a crash course in the Thai language, arranged to stay with a Na Nong Bong family in their two-story cement house, where she shared their meals, and slept, like the family, enveloped in mosquito netting on floor mats. During her time there, she learned more about Kon Rak Ban Keud and carried out in-depth interviews with a dozen of its female members to better understand their roles as activists. Gurney was particularly interested in the social structures that allowed the women to be politically active, and how they developed economically and socially over the 10-year-plus period. She has since expanded her focus to explore how defining home and place for community groups reinforces collective identities.

“The overwhelming majority of Kon Rak Ban Keud members are women, and its leaders are mainly women,” Gurney notes. “While some of the women are subject to familial constraints surrounding their activism, men support the movement — the women consider them supporters and protectors. These differing perceptions of men and women create different gender roles in the context of collective action. The women definitely talk more in meetings and protests; they use social networks with other women.”

Gurney says that when confronting government officials, the activists use gender differences to their advantage. For example, they put women in the front at public demonstrations and feature them as spokespeople to enhance the message and minimize the potential for violence.

“Many of the female activists see women as more proactive and having better ideas than their male counterparts,” she says.

Gurney’s research is the subject of her honors thesis titled “The Agency of Women in the Grassroots Organization Kon Rak Ban Keud: Mobilizing Against Gold Mining in Rural Northeast Thailand.” Her experience and Clark education are preparing her for a career in which she will foster cross-cultural connections to work toward equal opportunities and environmental sustainability.

“Seeing environmental destruction caused by Western-driven consumerism with my own eyes has solidified my environmentally focused career direction,” she reflects, adding that her major “continuously challenges me to critically examine mainstream development initiatives and the role of Westerners within them.”

On returning to the familiar environment of Clark, Gurney realized she had changed. As well as feeling more proficient in the people skills needed to build collaborative relationships, she cites a better understanding of how to handle research challenges.

“I was always told that research is not a linear process,” she explains. “But it was still a learning experience to be doing independent research and have unpredictable obstacles arise. Learning to stay calm and stable during the rocky points, and discovering new ways to get around them, was a very valuable lesson for me to learn.”

Gurney says she applied to Clark because it seemed like an open-minded environment with authentic and original people.

“Different dimensions of the University have shaped me personally and academically,” she says. “Facing existential crises in philosophy classes, critically thinking about international work in IDSC classes, nights filled with the power of artistic expression, and heated discussions with fellow students and friends, have led me to pursue a direction filled with meaning, love, diversity and social change.”

Editor’s note: The handiwork of the Kon Rak Ban Keud women can be purchased through the Radical Grandma Collective.

Belonging Talks will examine refugee integration through a wider lens