Clark’s diversity and inclusion efforts find a home on campus 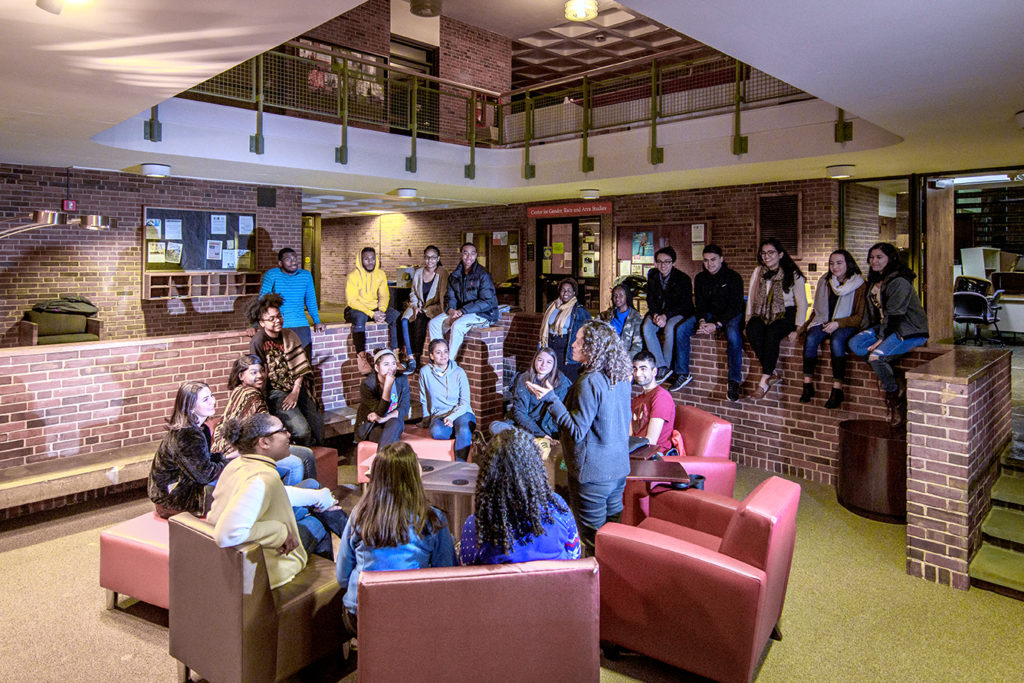 A few minutes before midnight on Friday, November 13, 2015, a small group of students dressed in black walked nervously through the stainless steel doors of the newly renovated Kneller Athletic Center, sped quickly past the packed bleachers on the south wall of the gymnasium, and stepped across the bright broad lines of black paint that had, until that moment, separated the gym, the court and the game about to be played on it from the world outside those metal doors.

A friend running the PA system passed the students a microphone, and from a small tight circle huddled close in the northwest corner of the Kneller’s gleaming hardwood, surrounded by a raucous crowd, they began to speak.

They haven’t stopped speaking since. The protest at the Midnight Mayhem basketball game inaugurated a new era of student activism at Clark, which has continued to transfix and transform the University in the two years since. And as the world beyond Main South has descended further into division, issues of race, inclusion, and identity that have absorbed communities across the nation have also come irreversibly and undeniably to Clark, and Clark is working to find the right ways to address them.

The recent history of administrative efforts to address issues of race, inclusion, and identity at Clark begins in the spring of 2011, when that year’s Academic and Financial Plan mandated the creation of a Diversity Task Force comprising alumni, students, staff, and faculty. Their job was to “assess the current campus environment with respect to diversity, and to propose specific steps for improving the campus culture in this respect and for diversifying the faculty and staff.”

The task force’s final report, when presented in April 2012, characterized Clark’s institutional attitude toward the issue as one of “benign neglect.”

The task force went on to catalog sustained inequities in Clark’s student, faculty and staff recruitment efforts, and recommended the creation of a University-wide Office of Diversity and Inclusion, headed by a faculty member and tasked with centralizing and expanding efforts to improve access and equity on campus. Betsy Huang, a longtime member of the English faculty, was appointed to the position the following summer.

The office required time to gain traction and buy-in from key campus groups. “It took a whole year,” Huang says, “for the office to be established, to gain some visibility on campus, to begin to roll out to the campus community the services and the agendas and the initiatives that the office was striving to put in place.”

In the meantime, it remained unclear whether there was a true constituency on campus for sustained action to address institutional inequities.

“I think that there’s a difference between intent and impact,” says Hayley Haywood ’09, Clark’s Director of Multicultural and First Generation Student Support. “I believe that the majority of people at Clark have beautiful intent and really want to embody Clark’s motto, but that’s not always our impact. It’s important to understand that everyone has blind spots, and we all have some level of privilege, and if we’re not consistently being reflective and interrogative of our own privilege then regardless of our intentions we can still do harm.”

“The question is,” says Sheree Marlowe, Huang’s successor as Chief Officer of Diversity and Inclusion, “how do you help engage those individuals who believe that they’ve already ‘arrived,’ but don’t realize that they might be part of systemic barriers? Many of those individuals seem to have liberalism in thought but not in action.” In other words, a full two years after its own 2012 report found a culture of “benign neglect” around issues of diversity, inclusion and racial justice, Clark too often seemed to believe itself too good-hearted to have a problem.

By the time he returned to Clark for his senior year in the fall of 2014, Stephon Richardson ’15, MAT ’16, had grown tired of the pace of Clark’s progress. Richardson had been involved in various forms of campus activism since arriving at Clark three years earlier, but the fatal police shooting of Michael Brown in Ferguson, Missouri, just a few weeks earlier had given him and other student activists a new sense of urgency around their work at Clark.

They were convinced their current model for activism — drawing up a list of demands, working to get as many groups as possible on board and building a coalition for change — wasn’t working to achieve the goals they sought.

“If we found one problem on Clark’s campus,” Richardson recalls of that period, “we said that we were going to address all of them. But there weren’t enough of us to combat everything. We just needed one good victory. Before we could go big, we needed to start small.”

Richardson and two classmates, Jeronda Scott ’16 and Jeremy Doss ’17, set their sights on a single tangible goal: The creation of a physical space on campus dedicated to students of racial, ethnic, gender, sexual and religious minorities.

They had a space in mind — a few dusty rooms off Maywood Street, on the ground level of Dana Commons. The building, which opened as part of a campus expansion in 1967, had a long history of use by Clark’s student identity groups, but for the previous two years had housed Clark’s LEEP Center offices, which were about to move to the University’s new Main Street building. The students called their effort “Reclaim Dana Commons.”

After some initial struggles, the students found common cause with a parallel faculty effort to create the Center for Gender, Race, and Area Studies (CGRAS) to institutionalize interdisciplinary scholarship and research that had been happening on an ad hoc basis across the University for some time. The new center needed a home, and by the fall of 2015 the two efforts had all but merged.

And then, on November 15, a dozen students stepped onto the basketball court.

Lulu Moyo ’16, CDP ’17, wasn’t the first speaker on the court that night — that was Joanna DaCunha ’15, CDP ’16, who organized the protest alongside Moyo and Florcy Romero ’15, CDP ’16 — but she took the mic next, exhorting students in the bleachers along the north side of the gym to come down onto the court and stand in solidarity with students protesting racial discrimination on college campuses across the country.

At Clark, students spoke powerfully of an existence of sustained vigilance that left them feeling unmoored, uncomfortable, and out of place on a campus that should have felt like a home away from home.

“At that time,” Moyo says, “with everything that was going on in the world, the climate at Clark started to shift for students of color. We started talking more openly about our own experiences and Clark’s role in those experiences, and the kind of complacency that Clark had with not addressing things that were happening on campus or in the country. We felt that the only way we could make an impact was just to have a jarring visual representation of how we were feeling, and making it so that they couldn’t ignore it.”

Moyo stood in one corner of the gym with her microphone and called for the stands to empty onto the court and stand in solidarity with student protesters who’d organized at the University of Missouri and at Yale. Within a few minutes, the bleachers on the north side of the gymnasium were almost bare, and a crowd was milling about (albeit a little bemusedly) near center court.

Then things took a turn. The police were called to break up the protest, and as Moyo, Romero, DaCunha and other organizers were led peacefully out of the Kneller — no arrests were made — some members of the crowd began to chant “USA, USA….”

“In that moment,” Moyo says, “there was this visceral feeling of us being ‘othered’ and made to feel un-American by our actions. That they were the representation of America.” An hour later, Clark wrapped up an 83–78 win over Worcester State.

“What happened at the Clark basketball game,” Huang says, “precipitated everything that happened afterward in terms of direct action.” The University held a “race forum” in Tilton Hall the following week, attended by more than 200 students and President David Angel, and the campus came alive with conversations about race and identity.

Multiple students who attended the forum that evening labeled it an “epochal” moment for campus discussion about race. The conversations weren’t always easy, and they weren’t always polite, but they were happening among students of all backgrounds, and Clark’s administration was in the front row, listening.

“I think that moment was one where people felt like they looked around and saw what other students were doing across the country, and they felt like, well, now we can speak, too,” Doss says. “Now we can speak to all that we’ve been going through.”

Within a few weeks of the protest, Reclaim Dana Commons received funding to begin refurbishments. “I definitely think it was a victory of many approaches,” Richardson says. “We couldn’t have had Malcolm without Martin, and change doesn’t necessarily happen on your terms, otherwise they would have hooked us up with a space without us asking.”

The new space in Dana Commons — big enough to house CGRAS, the Office of Diversity and Inclusion, the Office of Multicultural and First-Generation Student Affairs, a refurbished resource room, a space for a new pan-identity student group called MOSAIC, and a refurbished prayer room — opened in January 2017.

In the two years since the events of November 2015, a great deal has transpired at Clark. A new fund targeted to addressing issues of inclusion — the D’Army Bailey ’65 Diversity Fund — was launched in October. A new half-credit course specifically designed for first-generation Clark students is in place. Key faculty members of color have been retained and hired.

This fall, Marlowe launched a diversity and inclusion certificate program for faculty, staff, and graduate students to offer an in-depth examination of diversity and differences to better understand how to build a stronger and more inclusive Clark community.

The University also issued a landmark Survey on Campus Culture and Community to gain critical data on the experiences of campus constituents, especially those who belong to historically marginalized groups. The survey is expected to provide valuable insight and help determine the University’s strengths in diversity, inclusion, and equity as well as recognize areas for growth and improvement.

“It’s very possible to get stuff done if you’re willing to own the work,” Richardson says. “There will be a lot of people who are going to support you but aren’t necessarily going to do something tangible to help, and that’s fine. You’ve just got to adapt to it and work within it.” Doss echoes the point. “If you want something, you have to take initiative,” he says. “There are so many little things I had to do along the way that I didn’t know were possible, that I didn’t know could be done.”

The nature of a university is to forget. Students spend just a few short years on campus, and so it falls to alumni, faculty and staff to create and preserve a university’s collective memory.

This year, as in every year, the number of committed custodians is growing.

“Let’s dispel,” Haywood says, “this idea that our student activists don’t like Clark, and that’s why they’re so critical of the institution. As Ta-Nehisi Coates has said, you are most critical of the things that you love the most, because those are the things that sometimes disappoint you the most — because you have such faith and such belief in them.

“That’s how these activists feel. They see such possibility in Clark, and they just want to see it grow and succeed.”

This story originally appeared in the winter 2018 issue of Clark magazine.

‘An honest and vulnerable space’