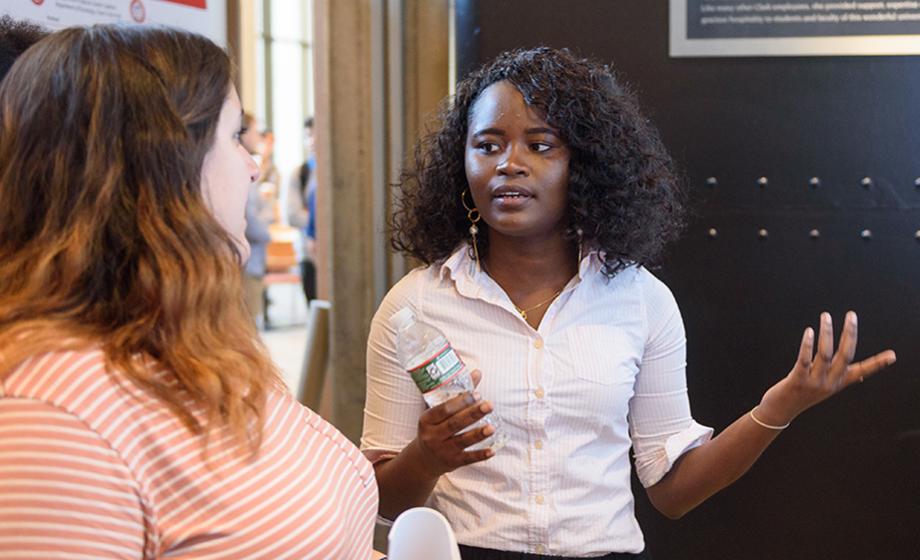 Charline Kirongozi ’18 brings multiple perspectives to her political science studies at Clark University. A native of the Democratic Republic of Congo who grew up in Portland, Maine, Kirongozi draws from her personal experiences while also learning from others. If there’s a common thread to her research, it’s that she likes to meet people where they are.

Over the past year, Kirongozi has studied abroad in Namibia and South Africa through Augsburg University’s Center for Global Education and Experience, interning for the Research and Labor Institute and living with local families. Last summer, via Clark’s Harrington Public Affairs Fellowship Program, she interned at Human Rights Watch, near Washington, D.C. And thanks to a Clark Steinbrecher Fellowship, she attended South Carolina’s Charleston Natural Hair Expo as part of her research into the historic, political and cultural significance of how Africans and African-Americans style their hair.

“I think experiential learning is really important because you are learning from different narratives. This is something I learned to appreciate during my study abroad,” says Kirongozi, who currently is interning in the Worcester office of Massachusetts Democratic Congressman Jim McGovern. “These are valuable experiences that are helpful because they allow me to use fragments of my hands-on experiences in the classroom and give me the opportunity to meet new people from many different backgrounds.”

Kirongozi’s interest in black hair was sparked by personal experience, going back to her childhood in the Congo.

“Although I was living in an area that was majority black, many people had the pressure to straighten their hair because of the media. There is pressure to wear these long extensions and even to use chemicals to straighten your hair,” she says. “It’s all legacies of colonialism.”

The straightening of black hair in the United States has connections to the legacy of slavery, she says. “If your hair was softer, you were a housemaid. If not, you had to work in the field.”

Lately, however, there has been a shift toward more natural, curly black hair, perhaps due to the Black Lives Matter movement, she says. “It’s coming back. It’s a way of resisting white supremacy and the system.”

Kirongozi’s project — which she calls “Hair Story” — is more than academic. She also feels a responsibility to share her findings with young black girls who are affected by the media and advertising’s focus on Western European standards of beauty.

“I was talking to my little cousin — she’s 5 — and she’s already thinking her hair is not pretty because all her friends have long, blond hair,” she says. “Growing up, I went through that as well. I had a relaxer when I was 7 years old, and they called it the ‘creamy crack’ because you get addicted to it. You’re forced to keep using it unless you cut your hair and start over.”

Kirongozi returned to Portland to conduct workshops with teen girls from the Congolese and Sudanese refugee communities, sharing what she had learned in her research and at the hair expo. She taught them to use natural products such as shea butter, olive oil and coconut oil on their hair. She sees this information not only as boosting the girls’ self-esteem, but also protecting their health because hair relaxers are full of harsh chemicals.

“I discovered that some of the girls are already ‘natural’ because it has become a trend in the black community. This is why I put emphasis on learning about the history of black hair so that it does not remain just a trend,” she says.

But other girls still feel pressure to straighten their hair. “The need to conform to the American society, especially as these girls are immigrants and refugees, has been embedded in them by their parents.”

Kirongozi’s concern for children also surfaces in her research stemming from her Human Rights Watch internship and from a political science class with Associate Professor Michael Butler that examined global terrorism. At Clark’s recent Fall Fest, she presented a poster titled “Exploring the Use of Child Soldiers by Terrorist Groups and Government Policies in Mali.”

Once she graduates from Clark, Kirongozi hopes to put her research into action, making an impact on the lives of girls and women. She plans to enroll in Clark’s fifth-year accelerated MPA program, then pursue a career at a nonprofit organization aimed at supporting victims of rape in eastern Congo.