Clark commemorates 75 years of activism and engagement by Clark women 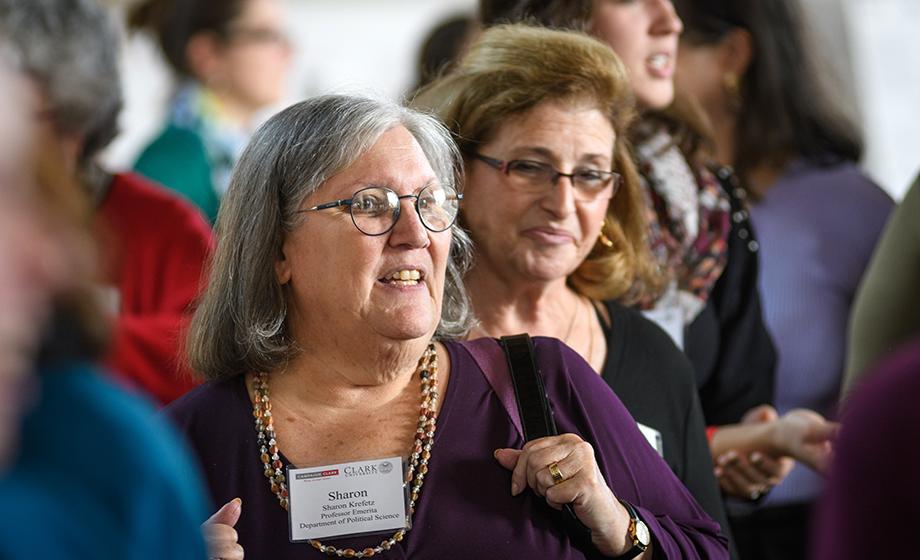 Guests attending the event “Celebrating 75 Years of Co-ed Clark” on Oct. 28 could choose from several afternoon activities, including three hour-long panel sessions, a celebration of the 40th anniversary of women’s field hockey at Clark, and a closing reception at the Shaich Family Alumni and Student Engagement Center.

Two sessions, “From Clark to a Life of Activism” and “Clark Women in Geography,” ran concurrently, followed by a keynote conversation with Professor Emerita Sharon Krefetz (pictured at top) and former Dean of the College Marcia Savage ’61, M.A.Ed. ’62, Ed.D. ’66, L.H.D. ’92.

“From Clark to a Life of Activism” featured three outstanding alumnae whose professional roles exemplify Clark’s emphasis on making a difference in the world.

Linda Savitsky ’70, who recently completed a 10-year term on Clark’s Board of Trustees, noted that the spirit of activism that characterized her time at Clark is still present on campus today. After graduating with a major in government, she spent 30 years in local, regional and state government finance before establishing her own consulting practice. In 1997, the Connecticut Government Finance Officers Association presented her with the Albert F. Yung Award for Significant Contribution to the Government Finance Profession.

Savitsky described herself as “always thankful that I wanted Clark and that Clark wanted me,” calling her decision to attend as the “best choice I made in my life.”

Lynn Levey ’88, who returned to Clark in February to serve as its Title IX coordinator and assistant dean of wellness and prevention programming, also praised “the great spirit of activism and student engagement on this campus.” Before earning her J.D. from Syracuse University College of Law, the sociology major worked at two national think tanks — the National Center for State Courts and the Center for Court Innovation — to reform the criminal justice system’s response to violence against women.

Read more about the Oct. 28 celebration of Clark women

View a photo gallery of the day’s events

Rounding out the panel was Dyan Mazurana, who earned her Ph.D. in Clark’s pioneering doctoral program in women’s studies in 1999 and is currently an associate research professor at Tufts University’s Fletcher School of Law and Diplomacy and the Friedman School of Nutrition Science and Policy. She also serves as senior research fellow at the World Peace Foundation. As adviser to governments, U.N. agencies and nongovernmental organizations, she draws on her extensive research into how civilian populations, especially women and children, experience armed conflict. She recalled how Cynthia Enloe, professor of political science, always asked “Where are the women?” to ensure a gendered perspective on any issue.

Moderating the “Clark Women in Geography” session was cultural-historical geographer Mona Domosh ’79, M.A. ’83, Ph.D. ’85, the Joan P. and Edward J. Foley Jr. Professor in the Department of Geography at Dartmouth College. Panelists included Deborah Martin, director of the Clark University Graduate School of Geography; second-year doctoral student Roopa Krithivasan; and Meyru Bhanti ’18, who is double-majoring in geography and environmental science. Also serving on the panel was Janice Monk, who, while not a Clark alumna, published a 1998 article in the Journal of Economic Geography about women in geography at Clark.

Trustee Vickie Riccardo, P ’17, introduced the keynote conversation, in which Krefetz and Savage responded to questions posed by Associate Professor of History Amy Richter, whose research interests include the history of women in the United States.

Krefetz began her career at Clark in 1972, when female faculty were very much in the minority on campus. She recounted how she didn’t consider herself a feminist until she started assembling a syllabus for a course on women in politics. While she taught in what is now the Political Science Department, she would be instrumental in creating Clark’s women’s studies program.

Savage entered Clark’s Women’s College as an undergraduate in 1957, went on to earn two graduate degrees here and held various administrative positions at Clark, including dean of the college, through the late 1970s. She worked closely with Hazel Hughes, dean of women, toward the end of Hughes’ life (she died of cancer in 1968), and expressed gratitude for the support she received from Clark faculty as she transitioned from student to administrator.

Several scheduled panelists were unable to attend: Susan Hanson, distinguished university professor emerita at Clark’s Graduate School of Geography; Lydia Savage, M.A. ’93, Ph.D. ’96, chair and professor of geography at the University of Southern Maine; and Enloe. Event co-chair Elyse Darefsky ’79 said she was hopeful a panel featuring Hanson, Enloe and Krefetz could be scheduled for Reunion 2018.