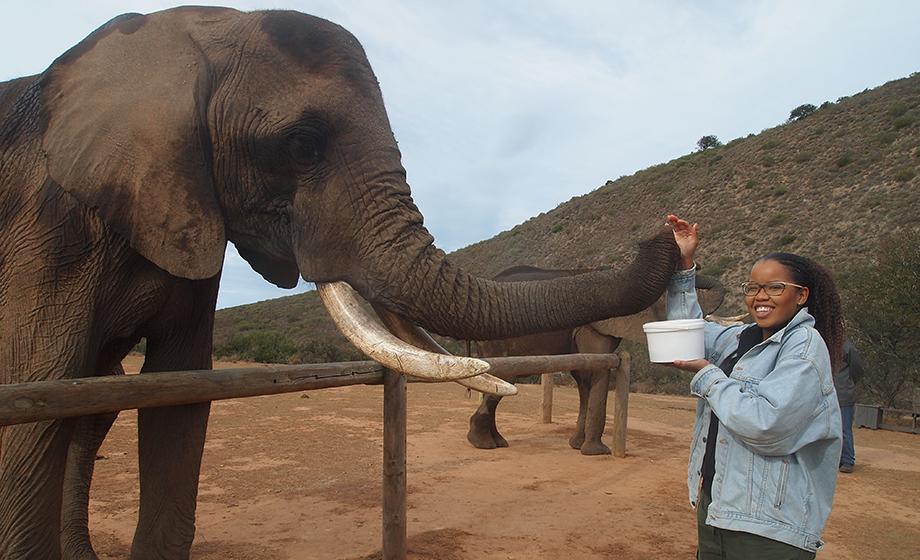 “When I began my journey to South Africa, I was nervous but determined to enter every experience with an open mind,” she says. “I knew there would be many things to come that I had never encountered before.”

Her LEEP project also marked the first time Callender combined her academic knowledge with practical skills in an internship.

As an environmental journalist and travel writer for Africa Media, Callender researched, wrote, photographed and pitched stories about issues facing communities and wildlife in the region. She chronicled her experience in a blog called “Callender’s Discovery” with a goal of completing a book to present at Fall Fest.

Callender’s internship took her to a primate sanctuary to write about the monogamous love lives of gibbons, and to the Indian Ocean on a humpback whale-watching expedition. She also traveled to Karoo to write about rhinoceros poaching, which remains a problem in the country despite efforts by conservation groups to combat it.

Callender’s ocean adventure, which included meeting swimmer Michael Phelps and Emmy-award winning cinematographer Andy Casagrande, happened by chance in June. While in Mossel Bay, a coastal town about 240 miles east of Cape Town, she and other interns spotted crews filming the Discovery Channel Shark Week program “Phelps vs. Shark: Great Gold vs. Great White.”Callender snapped this photo of a great white shark breaching the surface near Mossel Bay, South Africa. She took the video below from inside a diving cage during the same experience despite the date stamp.

“Mossel Bay is one of the few places in the world where you can see sharks breeching,” explains the global environmental studies major. On Casagrande’s invitation, Callender was able to gain some insight into his field over coffee and an interview.

“I learned the beauty of journalism is its unpredictability,” she says.

The Mossel Bay experience was only one of the ways she challenged herself this summer. When she wasn’t writing, Callender set out alone to explore and “break out of my bubble as a tourist,” she says. “I thought, ‘If I’m going to be a freelance journalist, I need to do this.’”

She walked about Cape Town connecting with fellow travelers and sharing a meal with a group from Congo after joining them in singing a song she learned from a friend at Clark. She also witnessed poverty and the country’s continuing struggles with race post-Apartheid.

“I’ve studied the intersection of geopolitics, sustainability and cultural ecology, and combined them with media courses, but I hadn’t had an opportunity to blend all that together,” Callender says. “The internship was an opportunity to do that.”

The internship also whet her appetite for more travel. Callender, who hails from Bridgetown, Barbados, hopes to someday work for National Geographic or start her own magazine, and is now expanding her résumé with an internship at Worcester Magazine. “My experience in South Africa changed my perspective on everything,” she says.

Wherever she finds herself in the world, though, she’s sure of her trajectory.

“Clark has given me a definitive sense of confidence and self, which is moving me in the right direction,” she says.