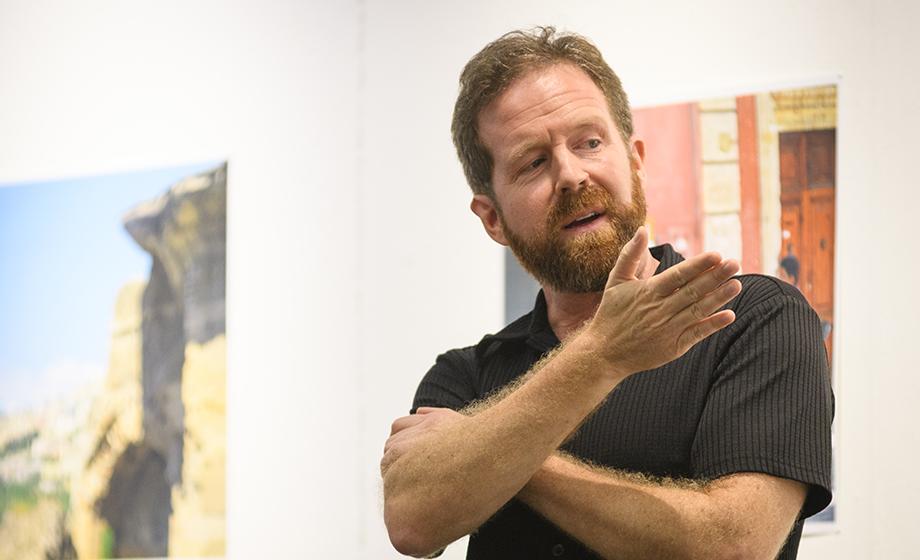 Associate Professor John Garton, art historian and painter, returned from Italy this past summer with an idea for an exhibition. But when his show opened last week at the Traina Center for the Arts, there wasn’t an artifact or canvas in sight.

“On Roman Time: Minute by Millennium” comprises 28 photographs Garton took while in Italy to research Renaissance gardens, with the aid of a Higgins School of Humanities grant. The photography “was a secondary pursuit,” he said, though one of the exhibited photographs will be included in an upcoming book project. The photos encompass two themes: time — how it passes, how we spend it — and public spaces.

“On Roman Time: Minute by Millennium” will be on exhibit in the Art Lab (second floor of the Traina Center for the Arts at 92 Downing St.) through Oct. 27.

In his remarks at the Sept. 13 opening reception, Garton noted he has been “intimately connected” to Italy for 26 years, ever since he spent six months studying there while at Trinity University. He later spent time in Florence and Venice as a Metropolitan Museum Fellow and, since he specializes in Italian and Renaissance Art, he has cause to return to the country for research.

Garton said he wanted to capture Italians passing time in public spaces on a normal day — like his photo of two older men sitting on a park bench. Friends socializing on a bench is a common sight in Italy, he said, but the same tableau in America might cause someone to assume the people are indigent or homeless. Garton believes there is much we can learn from how well Italians design and use public space. 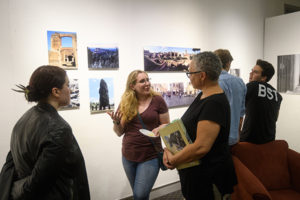 Photographing in the public sphere also allowed Garton to capture public conversation, which, in Italy, is “a full body sport,” he said. The exhibition includes a short film, “Station,” depicting two Italian train ticket-takers sitting on the platform at the Rome station, drinking water and having a conversation, while people around them go about their daily business. The video, which Garton created with Worcester-based film editor Danny Thompson, features a soundtrack by Matt Malsky, associate professor of music and dean of the college.

Garton said he loves the “immediacy and rigor” of photography, and singled out Clark photography faculty Stephen DiRado and Frank Armstrong, “from whom I learned a lot of what I know.” He studied 20th-century photographers during graduate school at New York University and was inspired, particularly by the work of Jack Delano. “He moved me with his artful documentary photography of the 1940s for the Farm Security Administration.” 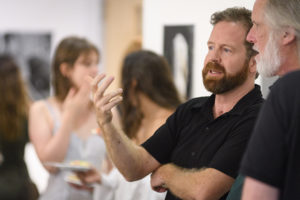 Garton’s show was installed with the assistance of students in Professor Elli Crocker’s Gallery Culture and Practice, a Problems of Practice course that lets students explore opportunities to connect what they learn in the classroom with issues faced by professionals in the workplace. The students were extremely helpful, Garton said, and made good decisions about regrouping the photos according to theme. “They made suggestions about height and about inserting spontaneity in the exhibition,” he said. “It’s a great example of unleashing Clark students on real situations.”

Crocker said Garton’s exhibition is just a small piece of what the students will undertake in the year-long course. In the spring, they will curate an exhibition for the Schiltkamp Gallery in which they will choose a theme, issue a call to artists and select submissions to include. They will also install the show and publicize it. Last year’s class curated “Home: Self, Spirit, Space,” featuring the work of graduate students and renowned artists from throughout New England.