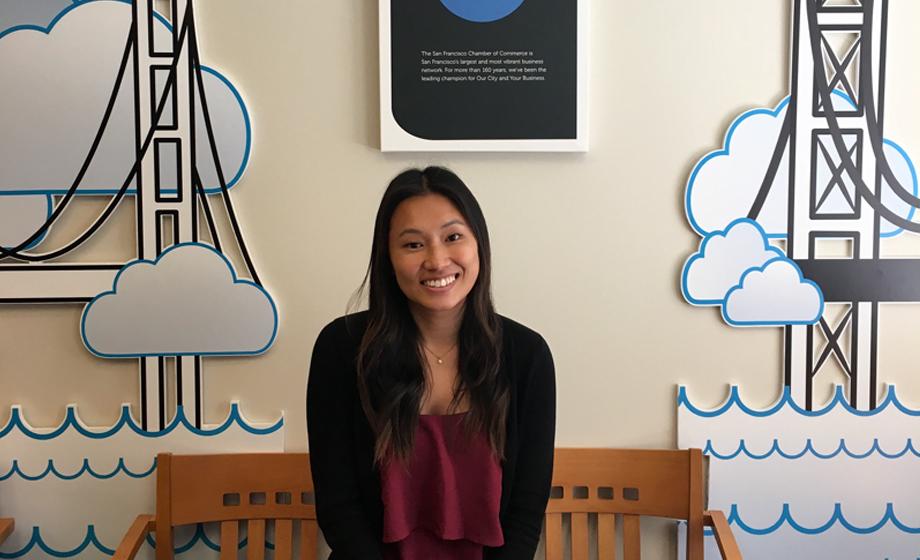 The benefits of economic prosperity and growth are often unevenly distributed. How, for example, in a thriving city like San Francisco, can some of its citizens be so wealthy, while others struggle to maintain a decent standard of living?

Clark University student Crystal Tang ’19, who has lived in the Bay Area much of her life, reflected on this and other thorny questions during her summer internship at the San Francisco Center of Economic Development (SFCED), an organization that provides free information and networking resources to support innovation and entrepreneurship.

In addition to conducting research, planning events, and writing for the SFCED’s website, Tang worked with her supervisor to create a project identifying and studying the impact of Certified B Corporations in the city. These are businesses that, in addition to meeting certain standards, “aspire to use the power of markets to solve social and environmental problems.”

“All cities strive for economic growth and prosperity,” Tang explains. “At SFCED we are constantly discussing how we can maintain growth, and also deal with consequences of growth like increased living costs, homelessness and a widening wealth gap. The research I’m doing can help SFCED understand this transition and adaptation period.”

Tang began her Clark career as an economics major. “I like how the study of economics can so clearly and logically explain human behavior in relation to wealth,” she says. “However, I became very perplexed with why, despite the wealth of a nation, there can still be so many people who are hungry, poor, and exploited.”

Assistant Professor Cynthia Caron’s course “Tales from the Far Side: Contemporary Dilemmas in Development” proved a turning point for Tang. She was introduced to the employee-owned business model, which intrigued her with its potential for creating a more sustainable and equitable society. “In that class I became inspired and motivated to empower individuals through economic means,” she says. Tang added international development and social change as her second major.

She notes that her majors, taken together, have given her a more comprehensive understanding of the relationship between wealth and poverty.

“Having these two perspectives is extremely important in my project,” she says. “Some of the most developed areas in the world, including San Francisco, continue to face inequality and poverty. Many times, it’s because the population’s wellbeing is overlooked by ensuring an area’s prosperity and development. However, once that wealth is established, in order to maintain a strong economy and society, the government must go back and fix the issues growth has caused.”

While Tang fully expected to hone “hard” skills during her internship, she found an unexpected challenge in working with colleagues of multiple generations who had different ideas and ways of doing things. “Being exposed to this situation was extremely important because this is not something I would have learned from a textbook,” she says. “I am so happy to have had the chance to be in this environment and learn from it.”