Nikolay Ionkin ’18 is a man on the move 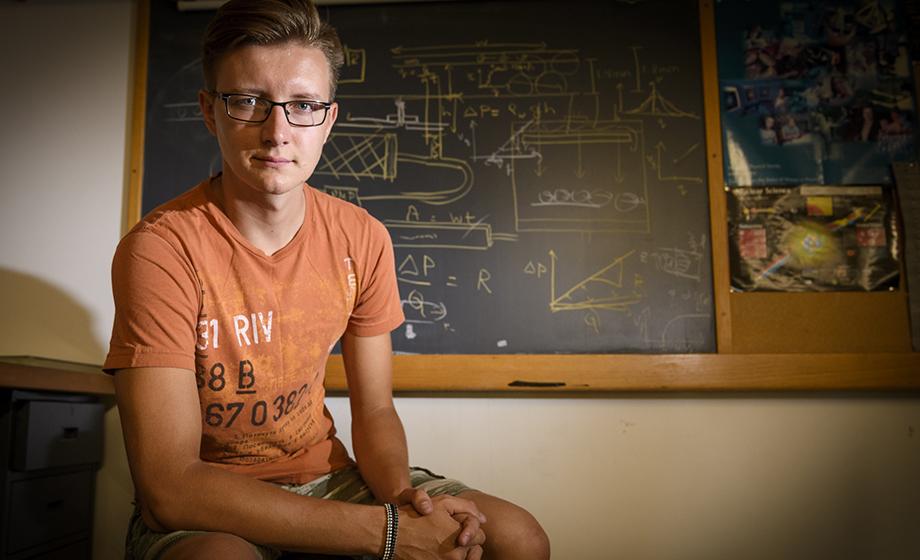 Ever since he was a boy playing with toy cars, Nikolay Ionkin ’18 has had a fascination with things that go. He imagined himself working in the automotive industry, but he never thought that physics might help him get there.

A high school teacher convinced him otherwise. And when he entered Clark, he began taking physics courses, including a thermodynamics lab.

“That was one of my favorite courses. I knew nothing to begin with, but I found that thermodynamics has so many wide applications to the everyday world, and to everyday things, including cars,” he says. “I enjoy Newtonian physics – moving parts. That’s what I’ve always liked.”

Now Ionkin will get yet another chance to apply Newton’s Laws. After being accepted into the 3/2 Engineering Program, he’s headed to Columbia University’s Fu Foundation School of Engineering and Applied Science to complete his last two undergraduate years. Eventually, he’ll receive two degrees: a B.A. in physics from Clark and a B.S. in mechanical engineering from Columbia.

“I’ll get the best of both worlds – a focus on engineering but at the same time, diversity in the coursework I completed as part of my liberal arts degree from Clark,” he says.

In his three years at Clark, Ionkin has delved into the intersection between physics and engineering by working in the Complex Matter and Nonlinear Physics Laboratory of Arshad Kudrolli, professor of physics.

For more than a year, Ionkin has conducted research with Kudrolli, physics major Nathan Fitzpatrick ’18 and postdoctoral researcher Andreea Panaitescu, Ph.D. ’13, to explore how water erodes the earth underground. Funded by the U.S. Department of Energy, their research could help scientists better understand the effects of hydraulic fracturing, or fracking, and other cases where fluids carve out channels and destabilize the earth.

Besides taking hundreds of photos and videos to document how water moves through sand between glass plates – emulating underground erosion – Ionkin also has learned to develop and test numerical models using Matlab software. This summer, he and Kudrolli added salt, which chemically dissolves rather than physically erodes, to observe what might happen when another element is added to the erosion scenario.

Their research last year resulted in a paper, titled “Transport and Channelization in Fractures Filled with Erodible Granular Medium,” presented at the American Geophysical Union’s fall meeting. Ionkin is a co-author with Kudrolli and Panaitescu on another paper, “Headward Growth and Branching in Subterranean Channels.” (An update: The article was published on Nov. 17, 2017, in Physical Review E, peer-review research journal of the American Physical Society).

“This research has given me valuable work experience. It’s prepared me for the real world,” Ionkin says. “And a paper is great for my résumé.”

At Columbia, Ionkin hopes to continue conducting research, but this time in engineering. He still has his eye on working in the automotive industry, where Newton’s Laws of Motion are tried and tested every day.