Adam Katzman earns his political stripes at The Blue Lab 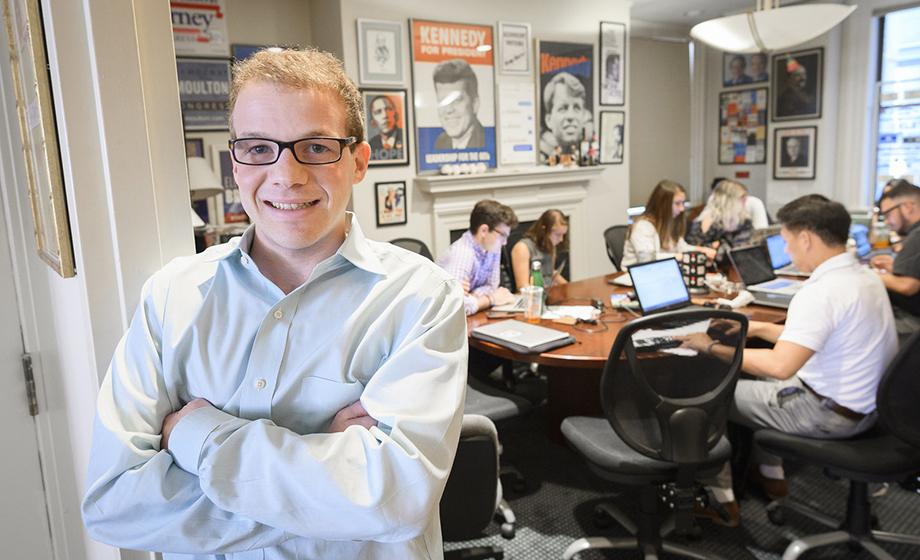 Adam Katzman ’18 came to Clark University with a passion for American government and politics. After three years with the Student Council, internships with a state representative and a congresswoman, and a fellowship with a Boston-based political campaign incubator, he’s in the thick of it.

Katzman spent the summer as a fellow for The Blue Lab, which provides resources and know-how for progressive candidates, especially those who have not fully made inroads into the political landscape: women and people of color. The Boston Globe described The Blue Lab, with its day-to-day operations run by college students, as “buzzing with the familiar energy of yet another local startup … much like a tech incubator.”

In the summer before his junior year, Katzman worked as an associate at The Blue Lab, strategizing with candidates throughout Massachusetts and New Hampshire; conducting research on district demographics and media strategy; and canvassing and calling voters. This year, he became a fellow, overseeing 30 of his peers and advising five clients.

“Having constant contact with the campaigns and crafting creative strategies proved to be valuable,” he says. “I’ve had an incredible experience working closely with the candidates. It’s been the perfect culmination of what I’ve studied at Clark.”

Katzman has been inspired and assisted by several professors, including Heather Silber Mohamed, assistant professor of political science and his adviser, who encouraged him to apply for internships; Robert Boatright, professor of political science; and President David Angel, with whom Katzman took a First-Year Intensive (FYI) course that challenges students to consider how they might live up to Clark’s motto, “Challenge Convention. Change our World.”

“The Blue Lab is a perfect example of an organization seeking to change the political landscape,” he notes.

It was in Boatright’s class on U.S. Campaigns and Elections where he came to understand the hard reality of modern politics.

“During the class, students shared their confidence that Hillary Clinton would be elected as president. The class after the election, everyone was in shock. Conventional political thought proved to have been wrong,” Katzman recalls. “As I sat in the class after the election, I came to the realization that at times, politics cannot always be predictable. What is most paramount is to learn from these moments.”

As Katzman plunges forward into politics, he’s recognizing how much his experiences at Clark will play a role.

“Clark fosters an environment where all students can thrive both in and outside of the classroom,” he says.

Besides The Blue Lab, Katzman assists in managing hundreds of volunteers and conducts training orientations as part of his work-study job as assistant volunteer coordinator at the Boys & Girls Club of Worcester. He has worked as a legislative intern for state Rep. Steven Ultrino, D-Malden, and as a congressional intern in Washington for U.S. Rep. Katherine Clark, D-Mass. On campus, he’s served as president of Clark Hillel and vice president of Student Council. Meanwhile, Clark’s Political Science Department presented him with its Morris H. Cohen Prize for Excellence in American Political and Public Policy.