For someone opening a restaurant in 12 hours, Ben Daitz ’96 is remarkably calm.

Inside Boston’s Prudential Center, Daitz presides over a soft opening event for food bloggers and other media, encouraging them to order off the menu to help the rookie staff prepare for the arrival of customers the next day. He chats with guests and works the crowd, while keeping an eye on the kitchen to make sure everything is as it should be.

Daitz has come to Boston to open his seventh Num Pang Kitchen, a “fast casual” eatery specializing in Southeast Asian-inspired sandwiches, bowls, soups, salads and sides. This is the first Num Pang located outside of New York City, in a prime spot beside Saks Fifth Avenue, which should ensure plenty of foot traffic. The restaurant’s vibrant colors, hip-hop soundtrack and succulent aromas are expected to transform the merely curious into devoted customers. That’s the plan, anyway.

“I’ve done this plenty of times,” the unruffled Daitz says, surveying the bustling scene. “Running around yelling at people doesn’t help anything.”

Daitz and then-business partner Ratha Chaupoly opened the first Num Pang Kitchen in 2009 with a menu featuring eight variations on the traditional Vietnamese bánh mi sandwich. The place was an instant hit. Lines snaked down the block, and sandwiches sold out daily.

“The first couple of months were a sustained natural high like I’ve never experienced before,” Daitz recalls. “Even though we were doing 16 to 18 hours a day, seven days a week, the energy that we got from people’s feedback got us through.”

Num Pang (the word is Cambodian for “sandwich”) isn’t Daitz’s first foray into opening a restaurant. He launched Vanderbilt, a gastropub in Brooklyn, and worked in the kitchens of fine-dining establishments including La Folie in San Francisco, and Danube and Tabla in Manhattan. He also helped with the opening of friend and one-time Clark student Chaupoly’s Kampuchea restaurant in 2006. A chance meeting on a New York sidewalk had rekindled their friendship, which eventually led to their Num Pang partnership (Chaupoly is no longer connected with Num Pang). 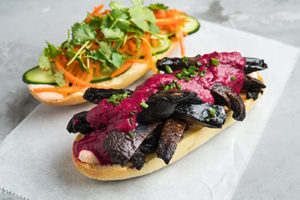 The distinctive décor includes graffiti art on the walls, contributed by local artists and tailored to the area. At the Prudential Center, a wall is adorned with the Num Pang Rooster logo wearing a Larry Bird jersey.

The flavors are as bold as the art. Daitz told The Wall Street Journal in 2014 that his sandwich designs “hit all different textural and flavor points within a dish.” That might include braised beef, chicken or pork, plus chili mayonnaise, cucumber, cilantro and pickled carrots. Yelp reviewers seem particularly fond of the five-spice pork belly sandwich. (“This has to be the most delicious sandwich I’ve had in recent memory,” gushes one Yelper.)

The offerings are so popular that Daitz and Chaupoly created a cookbook: “NUM PANG: 100 Recipes to Revolutionize Your Dinner from New York’s Favorite Sandwich Shop.” Celebrity chef Mario Batali, who created a sandwich for Num Pang’s charitable “Guest Chefs Give Back” program, said, “Ratha and Ben are masters of delicious composition. They are virtuosos because they make perfectly balanced sandwiches: no alterations, no additions, no substitutions. But each individual element of a num pang is an artwork in and of itself.” 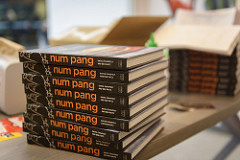 Daitz developed a taste for good food while traveling with his university professor parents during their sabbatical years abroad. “Every seven years, we were in Paris,” he recalls. When it came time to look at college for himself, he wanted a small, liberal arts experience where students were more than a number. Worcester also provided a midpoint between his family’s home in New York City and summer house in Maine.

After his first year at Clark, Daitz moved off campus. Over the next three years, he frequently could be spotted manning a grill on the porches of his apartments on Maywood and Downing streets. “What I remember is not letting the Worcester weather deter me from barbecuing all year round. Even during one of those crazy Worcester snowstorms, we’d be on the porch, grilling.”

Those times with his roommates — grilling, discussing events on campus, talking about classes and “supporting each other socially and academically” — have stuck with Daitz since his Clark days. “We grew up and became young men together,” he says. “I look back on those personal relationships in a really fond way. That was the good stuff.”

A political science major, Daitz thought he would be on a prelaw track and continue on to law school. “Once I learned it was four more years of school, plus clerking for another two, I was a bit deterred,” he says. “I spent my senior year having a little bit of a crisis, very worried that I didn’t know what to do with the rest of my life. Looking back, I could have been more relaxed about it. If I didn’t know what I wanted to do the second I graduated, the world wouldn’t have come crashing down around me.”

Daitz took stock of what made him happy and what excited him, and food kept popping to the top of the list. By the time he graduated, law school was off the table, but he had other tables in mind. “I had set up, through a friend of my uncle’s, a series of internships at some high-end restaurants in New York — to see if I was really as passionate about food as I thought.”

It turns out he was. After his internships, he enrolled at the Culinary Institute of America and embarked on his gastronomical journey.

The New York restaurant scene is notoriously difficult to navigate, and more new restaurants fail than succeed. Asked for an example of an obstacle that’s been thrown his way, Daitz laughs. “Just one?”

“From the most expensive real estate in the country, to the bureaucracy of filing permits and making sure things happen, to the tight labor market and extremely intense competition, anything can happen. Any one of those can tank a ship,” he says. Fortunately, he and Chaupoly had significant restaurant experience and were equipped to make better choices.

For example, they came up with the idea for Num Pang after seeing the success of bánh mi on the Kampuchea menu. The economy wasn’t great, and New York gastronomes were craving affordable, flavorful options.

Num Pang provides what the city’s foodies want. New York magazine calls Num Pang “New York’s Quietest Restaurant Empire.” Village Voice awarded it “Best Sandwich of 2013.” Zagat has ranked it among the best of the city every year since its opening, and Daitz — and his apartment — were even the subject of a New York Times Real Estate section profile in 2014.

The success of Num Pang’s Prudential Center location may be a barometer for further growth. Daitz would like to open up multiple shops in Boston and then perhaps branch out to other cities. For now, he’s plenty busy overseeing his quiet empire, and keeping calm.