Student marketing project grabs the Bull (Mansion) by the horns 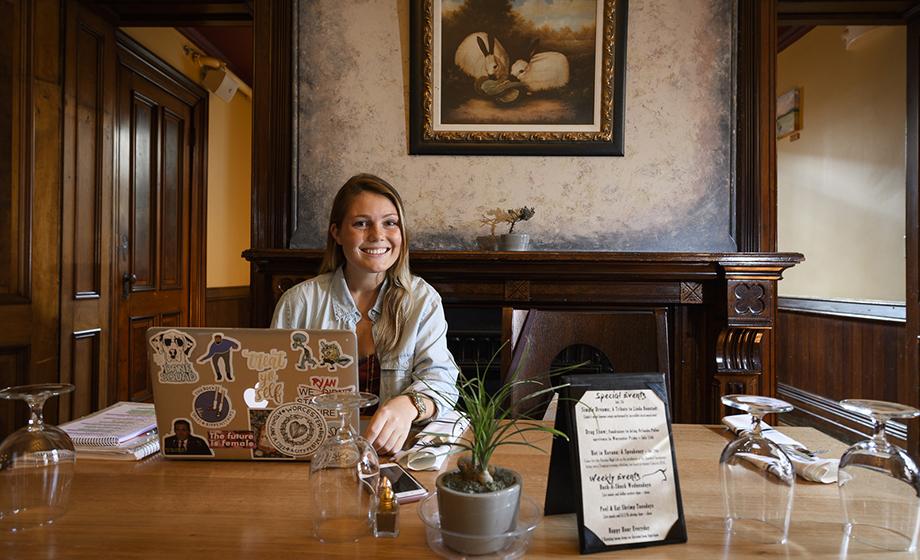 Emma Deneault ’18 knows her way around a pitch, but the economics major stepped outside the lines for a LEEP Project as a marketing and social media specialist at Bull Mansion – a new Worcester restaurant co-owned by alumna Victoria Mariano ’08.

“To say that a marketing position is out of my comfort zone would be an understatement,” says Deneault, who’s also the captain of Clark’s women’s soccer team.

During her internship, she’s learning the intricacies of Facebook, content creation and advertising, and says she’s inspired by Mariano’s “fearless approach to business,” something that took root at Clark.

“Not only is she teaching me the ropes of her business’ marketing methods, but also what it takes to foster, manage and maintain a business,” Deneault says.

Deneault isn’t afraid of challenges or change – she willingly accepts both.

She discovered Clark after some sisterly advice. Deneault had verbally committed to play NCAA Division II soccer at another school, when her sister, also a student-athlete, sustained a season-ending injury. Her sister told her she was still happy with her choice of school even if she couldn’t play her sport. This got Deneault thinking and searching for more.

“I found Clark and fell in love with what it stands for,” she says. “Soccer became a bonus for me, and now I’m able to earn an impressive degree while playing the game I love.”

Initially planning to major in chemistry, Deneault changed course after signing up for an economics class to fulfill a Program of Liberal Studies requirement.

“I knew I needed to pursue economics after two classes,” she says. “The opportunities I’ve had to make changes and connections through my education have allowed me to grow into the person I am.”

“If there is one thing I’ve learned at Clark, it’s to find comfort in being uncomfortable.”

In addition to leading the soccer team since sophomore year, Deneault mentored girls in Clark’s Main South neighborhood through the student-led organization All Kinds of Girls and, upon the urging of faculty member John Crawley, prepared for and took the Law School Admission Test.

“I don’t know if I’ll end up in law school, but it’s important to take on new challenges,” she says. “Those challenges will always be valuable experiences in my back pocket.”

As Deneault begins senior year, she says the best parts of her Clark experience have been the opportunities for growth and change, and the ease in taking advantage of them.

“Whether I venture near or far, my roots remain in Worcester, and I attribute my personal development to my time here,” Deneault says. “If there is one thing I’ve learned at Clark, it’s to find comfort in being uncomfortable.”