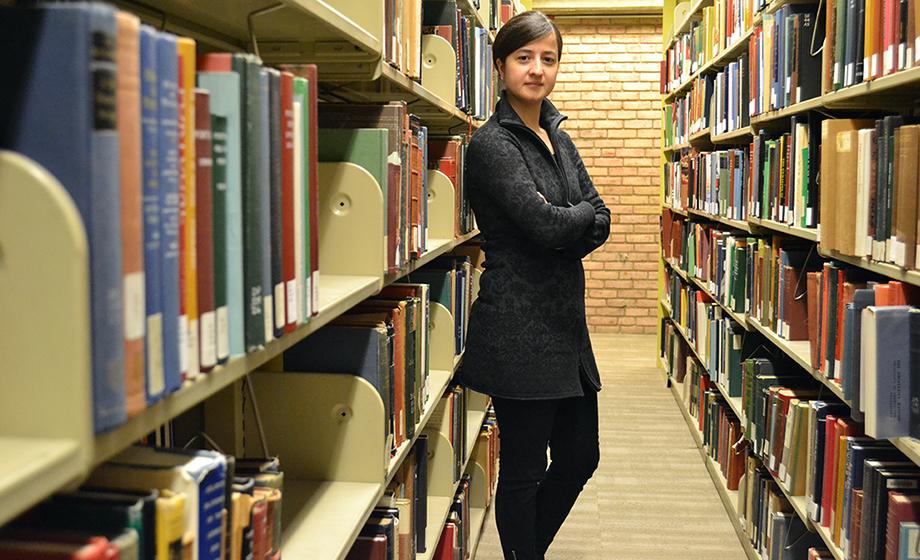 Melike Sayoglu M.A. ’12 came to Clark University in 2011 as a Fulbright scholar from Kahramanmaraş, Turkey, to study for a master’s degree in English. Now a doctoral student here, she was recently awarded the American Association of University Women’s International Fellowship to support her dissertation work during the 2017-18 academic year.

At Clark, Sayoglu has become ensconced in a community of scholars who have collaborated with her on publications.

“I love the interdisciplinarity and interconnectedness of Clark,” she says. “As a graduate student, I have meaningful and eye-opening conversations with professors across disciplines. Some of these conversations helped me develop new research interests while others deepened already existing ones.”

Sayoglu’s cross-disciplinary interests and partnerships – she currently is collaborating with scholars in English, political science, psychology, history, and women’s and gender studies – led her to create a self-designed interdisciplinary Ph.D.

“My dissertation has evolved into a focus on the representation of 19th-century Ottoman slavery through primary sources, researched at the local American Antiquarian Society,” she says. “I am specifically interested in 19th-century American newspaper articles, which record comparisons of American and Ottoman slavery. Ultimately, analyzing these records leads to my observations on 20th-century film portrayals of black Turkish women.”

In exploring this topic, Sayoglu is using a combination of semiotic, historical, feminist, and social psychological perspectives.

She is working with four professors for her Ph.D.: SunHee Kim Gertz, professor emerita and senior research scholar in the English Department; Cynthia Enloe, research professor of women’s and gender studies in the International Development, Community and Environment Department and adjunct professor of political science; Jaan Valsiner, professor of psychology; and Ousmane Power-Greene, associate professor in the History Department.

We asked Sayoglu, who plans to complete her dissertation in 2018, to talk more about her time at Clark.

Can you describe any projects or publications on which you’re working?

I’ve recently completed helping prepare a book-length manuscript with professors Valerie Sperling (Clark University) and Lisa McIntosh Sundstrom (University of British Columbia), both political scientists. The book, “Courting Gender,” examines gender-based discrimination cases in Russia and Turkey, as well as cases adjudicated by the European Court of Human Rights. I define myself as a feminist interested in women’s and LGBTQ rights issues. Working on this project, I have gained more expertise in the field and honed my research and analytical skills while working with professors Sperling and Sundstrom in the last three years.

Are there any professors who have inspired you?

My adviser, Professor Gertz, is the best mentor I could have ever imagined. She goes out of her way to help others reach their goals, or find a goal, for that matter, if they don’t have one already. She knows how to bring the best out in her students.

Why is your research important to you?

I discover more about Turkish and American cultures, histories and society through engaging in research. These two seemingly distant countries, both of which shaped my identity, share a lot more than I would have presumed. It is through engaging in research that I become smarter, more curious and knowledgeable, which in turn will help me make a difference in others’ lives.

Has anything you’ve discovered during your research surprised you?

Yes. When I first discovered archival materials at the American Antiquarian Society about the Ottoman Empire, I was very excited. Initially, I had thought that all the materials would be about U.S. history. I was wrong, obviously, in thinking that the archives, the memory of the nation, would be so isolated from the rest of the world. Seeing the interconnectedness of histories amazed me.

As an Eastern woman, being in the U.S., accessing these archives, and writing about them makes me feel empowered. Following Clark’s motto, I feel that I am challenging centuries old east-west dichotomies and gendered power dynamics.

What do you hope to do after you graduate from Clark?

I hope eventually to secure a faculty position, from which I will integrate research and teaching.