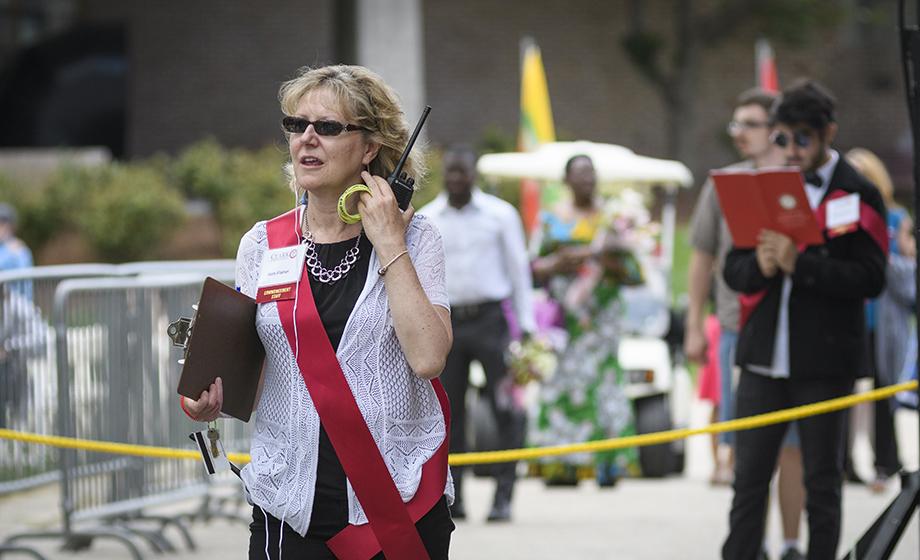 Fisher, who coordinates graduation each year, is an elusive blur — a human hologram seemingly empowered to materialize in more than one location simultaneously. A radio gripped in her hand like an extra appendage, she orchestrates an event with thousands of guests, three separate ceremonies, and infinite opportunity for something to go terribly wrong. So asking her to stop what she’s doing and say “cheese” is out of the question.

The 18-year Clark employee is assistant to the dean of the college and commencement manager, the latter job stretching out over the course of the year before consuming most of her spring. This year, somewhere between 5,000 and 6,000 family members and friends streamed onto the Clark University campus to watch 1,173 undergrads and graduate students receive their diplomas.

“It’s challenging, exhausting and really satisfying when we pull it off,” she says. “And I think we made the graduates happy.”

The Clark Commencement has changed in recent years to streamline the proceedings and accommodate the growing number of visitors. The undergraduate and graduate students march onto the green together for a combined ceremony and keynote address (this year’s commencement speaker was Earl Lewis, president of the Andrew W. Mellon Foundation). Graduate students and their guests then proceed to the Kneller Athletic Center while the undergrads remain on the green; the presenting of degrees takes place simultaneously in the two locales. This year’s commencement concluded in a trim 2:10, a pleasant improvement over the four-hour-plus epics of years past.

Planning next year’s commencement begins with a postmortem of May’s event. “We celebrate the success of our hard work, but we also see the blips that others don’t notice and start figuring out what we need to adjust the next time,” Fisher says. Negotiating with vendors for such things as tents, regalia and sound production starts in earnest in late summer. By the fall, Fisher will chair meetings of the planning committee — about 30 people representing departments across campus. Her “A team,” a group of eight, meets more regularly and wrestles with the nitty-gritty details, including the best ways to move huge crowds to their destinations. “You can think of it as an extremely complicated theatrical performance,” she says.

By January, preparations are at full throttle. Fisher notes that one of the great pleasures of her job is the ability to work with people from various departments, from physical plant to campus police, media services to the registrar. This year, 120 Clark staff members and 43 students executed the myriad duties on Commencement Day (10 people communicated with Fisher directly via portable radios). But her most trusted ally, as always, was Denise Robertson, the graduate school coordinator who organizes the graduate ceremony. “We couldn’t do this without each other,” Fisher says. “Denise is a superstar.” Appropriately, on the harried Friday before commencement they sported matching Dr. Seuss T-shirts that read “Thing 1” and “Thing 2.”

In the final days before commencement, the intensity level ramps up, especially for the A-teamers. Exactly which students will be receiving their diplomas can sometimes change right before the ceremony, so the delicate choreography of who sits where and whose name is called when may need to be altered. “Everything has to be perfect,” Fisher says.

It was, at least to the objective observer. Sure, more chairs were needed on the lawn and the new wristband system to enter the Kneller posed a few challenges, but things sailed along. Miraculously, the photographer even managed to squeeze off a few shots of Fisher — the real Kim Fisher, we assume, not the hologram version.