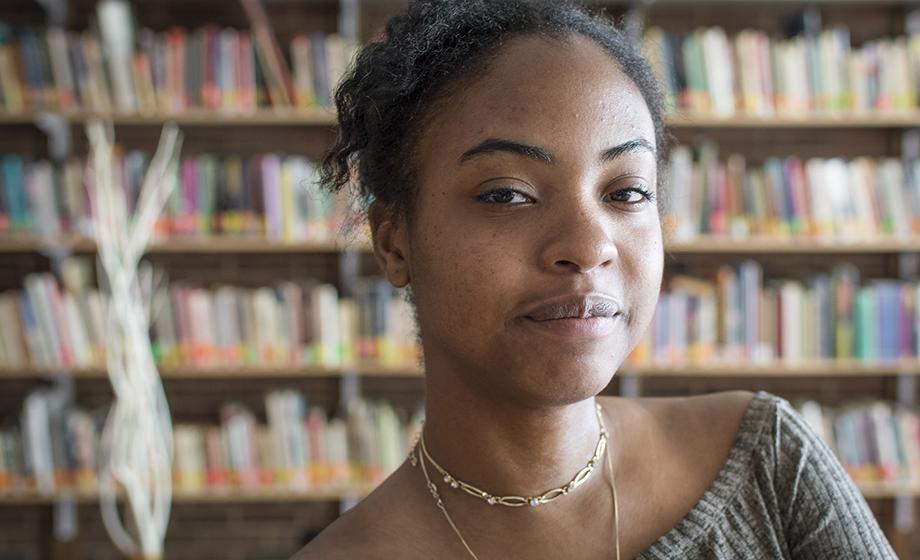 “Challenge convention. Change our world.” The Clark University motto, which endorses the spirit of an extensive yet intensive learning environment, is one reason why passionate students like Geraldine “Arielle” Pierre ’19, choose Clark. As a political science major concentrating in ethics and public policy, Pierre is aiming to change the way we make sense of our world, and actively striving toward bringing people together.

Pierre, who was born in Brooklyn, New York, and grew up in Elmont on Long Island, attributes her political activism to her background as the daughter of Haitian immigrants, and to the struggles she has observed throughout her life.

“My family is from Haiti, and they came to America, starting from nothing,” she reflects. “They learned English and aspired to achieve so much.”

When she arrived at Clark, Pierre carried with her a need to support communities of people whose voices have not been heard and whose suffering has been ignored and marginalized. Her political science classes, Pierre says, have helped her better understand the perspectives of people from different backgrounds.

“I was able to take controversial statements and rationalize and understand and think before I speak — something I will take with me wherever I go after college,” she says. “I also have gained an understanding of the underlying mechanism behind the institution that we are living in today. In order to create change, you need to understand why things are the way they are.”

As a basketball player her first two years here, Pierre saw her coach, Pat Glispin, play an important role in her education.

“She encouraged me to finish strong,” Pierre recalls. “Being an athlete and being involved in doing all these other things, you can lose sight of why you’re actually here.”

Pierre recently decided to stop playing basketball so she could dedicate herself to activism, including working on the Racial Justice Listening project with Amber Murrey, visiting assistant professor of international development and social change.

“We’re reaching out to members of the Clark community — faculty, staff and students — who have worked within the racial-justice sphere, and we’re collecting those narratives to create a physical document for future Clark activists so that when there is a need to resist, there will be a framework for them so they know what to do,” she says.

Pierre is passionate about promoting free speech at Clark. She co-founded and organized a monthly event, Floetic Fridays, to support fellow students’ artistic talents, from poetry and music to photography, films and paintings. (At right, check out this YouTube video by screen studies and music major Kristi Xhelili ’20.)

“It’s important for people to speak their truths, because I feel like in a lot of other spaces, people don’t necessarily feel like they can say what they are truly most passionate about,” she says. “One thing that we stress while promoting this is that everyone here is listening to you, everyone is open and accepting, and it’s a hate-free zone.”

The first Floetic Fridays event drew more than 70 students from all sectors and cultures across campus — academics, sports, the arts and more.

“Students feel so comfortable and welcomed in the space,” Pierre says. “We try to create an atmosphere so that people from all walks of life can come together and share their stories as an act of political resistance. The more we tell our stories, the more we educate our peers about our histories, our struggles and our joys, the more we can get to know each other and work together in a more impactful and effective way.”

Besides her political activism, Pierre has been actively building a résumé of work experience as well. This summer, she is working as a digital media intern at Church World Service, a global nonprofit immigrant and refugee resettlement agency in New York. She manages the organization’s social media platforms — Twitter and Facebook — and creates posts that strengthen campaigns and initiatives aimed at promoting awareness and involvement in immigrant and refugee issues in light of President Trump’s travel ban.

Last summer, Pierre was an editor for Markets Media’s website, which provides information and news about the institutional trading and investing industry. She produced articles for the site’s Life section, assisted the managing editor, and was head photographer for the company’s FinTech Summer Trading conference at Google’s New York headquarters. In addition, she spent a month working as a sub-paraprofessional for students with disabilities in the New York public schools.

The school experience, coupled with her campus activism, has prompted Pierre to consider a career in public policy after she graduates. She also aspires to start a nonprofit to help marginalized communities around the world.

Pierre believes the organizational and leadership skills she has gained through her work with Floetic Fridays and other student-run organizations, along with her involvement in a collaborative and inclusive community at Clark, have prepared her to pursue her goals after college.