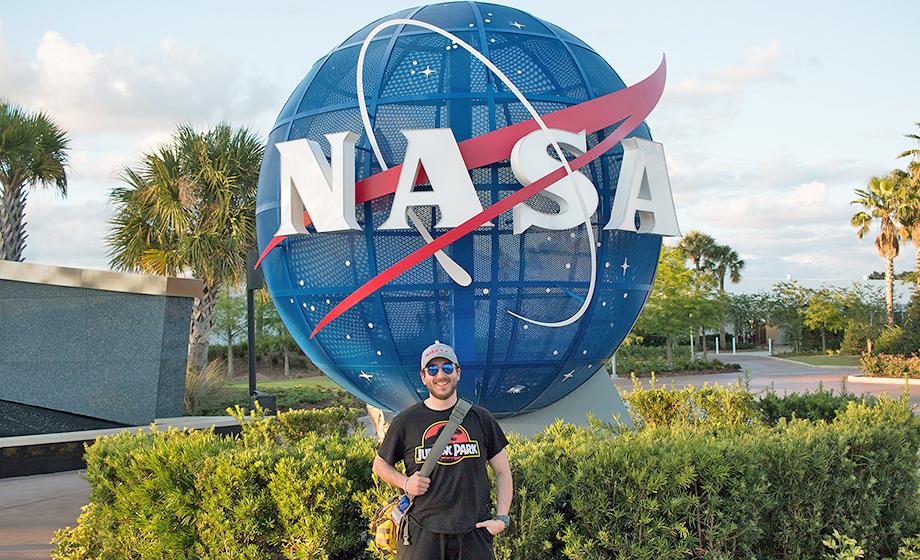 Think you know all there is to know about Clark University physicist Robert H. Goddard and his impact on the world of spaceflight? It’s possible JP Burke ’08, a self-declared “spaceflight nerd” who graduated from Clark with a double major in mathematics and computer science, knows more.

Burke works for a.i. solutions, a contractor for NASA’s Goddard Space Flight Center. He also has a podcast about NASA spaceflight history called “The Space Above Us,” available on the Web, iTunes and Google Play.

But before attending Clark, Burke already had a passion for all things Robert H. Goddard, and he loved the University’s connection to space. Goddard held two degrees from Clark, and while a physics professor here, he ushered in the Space Age with his launch of the first liquid-fuel rocket on March 16, 1926, in Auburn, Mass.

“Professor Sternberg was always willing to give me some non-sugar-coated advice,” Burke says. “Working for ITS and the Linux lab gave me a really important head start for my career in tech, and was my first experience being responsible for tech solutions that actually made an impact.”

Below, Burke talks about his work, his passion for spaceflight, and what he does in his spare time.

You call yourself a “spaceflight nerd” on your LinkedIn profile. Why are you so passionate about spaceflight?

I was always interested in spaceflight, even as a kid, but I think two events are responsible for me becoming such a fanatic. The first was the Space Shuttle Columbia accident in 2003. When the Columbia was destroyed, and her crew was killed, it was such a shock that I needed to understand how it could happen. The other event was the dual Mars rover landings in 2004. Knowing I was one of the first few thousand people on earth to see those rocks when the first navigational camera images came in was indescribable.

As for why I continue to be passionate about spaceflight, I think it’s interesting and I think it’s important. If you wind the clock forward enough there are two paths for humanity: Either we expand to become an interplanetary species, or we go extinct here.

How did you get your job at a.i. solutions?

I help staff an anime convention in Baltimore called Otakon. Every year, there is a different overall theme for the con, and in 2014 the theme was space. In a lucky turn of events, my friend gave me an hour slot to talk about spaceflight and teach people the basics of how rockets, orbit and spacecraft work.

After the talk, a guy came up to me and said, “I work at the Goddard Space Flight Center, we should talk.” He turned out to be Dr. Conrad Schiff, who was the lead flight dynamics officer for the Magnetospheric Multiscale Mission. Conrad started giving me guidance on stuff like what kinds of companies and roles were out there, and what I should be learning. In my mind, I needed to wait until I could get a degree in aerospace engineering before I could even think about applying for space-related jobs, but he encouraged me to start right away. And he was right.

Can you describe the work you’re doing as a software engineer at a.i. solutions?

My current role is writing support software for the team that operates three spacecraft that are part of an earth science constellation. Each of the three spacecraft is similar, but are just different enough to be tricky. The day-to-day work of running a satellite involves a lot of gathering data from various other groups, crunching numbers, analyzing things like “When do we need to raise our orbit again?” and “How long will our fuel supply last?” There’s a surprising amount of manual labor involved in these tasks. The software I write helps to automate a lot of it so the analysts can focus on the tricky matters and not the mundane but time-consuming stuff.

Can you explain flight dynamics systems?

Flight dynamics can be thought of as “Where have we been, where are we now, and where are we going?” This particular constellation of satellites is in what’s called “sun-synchronous” orbits, meaning it always passes over points on the Earth at the same local time. This makes research observations a lot simpler, but also means that you have to keep a close eye on things so you stay in that orbit. The flight dynamics guys figure out where exactly the spacecraft is and what needs to be done to keep it where we want it to be.

Do you work at the Goddard Space Flight Center?

Most of the time I work at the a.i. solutions headquarters about 10 to 15 minutes down the road from Goddard, but I am on site pretty often. There are some weeks when I’m there every day and some when I’m not at all. The first time I walked in, it was weird reconciling the thought that I belonged there. Even better was when I finally got my NASA badge, and was able to get in unescorted. I just aimlessly wandered around the center for a while, seeing what there was to see.

To be honest I’m not quite sure what the dream job would be yet, other than flying in space myself. I’d like to get closer to the spacecraft. I want to be able to see a mission unfold and know I played an integral part in making it happen. I want to see code I wrote flying in space. This is a little silly, but I want to physically touch a spacecraft.

I’m spending my first year at a.i. working as hard as possible to make quality support software while also learning what kinds of roles exist and what is required to be in those roles. At some point, I’d love to go back to school to beef up my aerospace engineering credentials. I think someone with a strong software and aerospace background could have a lot of fun in this industry.

Can you talk about helping organize and run Otakon?

Otakon is every year, usually in early August. I’m part of the anime music video department, which manages the yearly AMV contest and also runs the AMV Theater, which is a room that seats 300 people and operates all weekend long with various programming. Otakon is a ton of work but also a ton of fun. When we’re on site, we’re lucky to have a spare hour or two to enjoy the con for ourselves. And since 2014, I’ve been doing a panel on spaceflight.

You’ve mentioned you’re always working on side projects. What’s your side project of the moment?

I’d say the big three side projects of the moment are The Space Above Us (my NASA spaceflight history podcast), getting into running (couch-to-5K is a pretty amazing program), and simulation racing in virtual reality.

What is simulation racing?

Simracing is one of those things that sounds a little ridiculous until you get into it. I race online in a sim called Assetto Corsa, which is known for its highly accurate physics. I use a real wheel and pedals, and the wheel has force feedback, so I can feel the road when I drive. To top it off, I wear an Oculus Rift virtual reality headset, so it truly feels like I’m in the car. I like that participating in an online race requires a lot of preparation and practice and then leads to one incredibly adrenaline-filled hour.

Tell us more about your podcast.

Back around 2010, I was looking for stuff to listen to while I worked out and did chores. I found some great audio books and developed my love of podcasts. One that I happened across was “The History of Rome” by Mike Duncan. As I was learning about Rome, I kept thinking it would be great if there was a similar podcast but about spaceflight history. Everyone can tell you about Apollo 13, but how about Gemini VII? Or STS-84?

Mike Duncan said he wanted to do his Rome podcast because he wanted to share the many awesome stories hiding in the dry old texts no one wanted to read. I have a similar goal.

I’ve received a lot of positive feedback from friends, family, and coworkers, and two completely random people. The randos are particularly rewarding because I didn’t have to berate them into listening in the first place. Speaking of which … come on, Clarkies, let’s get those subscription numbers up! Check out http://thespaceabove.us (and also on iTunes and Google Play).

What would you do if offered a chance to go into space?

Sorry, I can’t hear you over the sound of the hatch sealing. Are we GO for auto sequence start yet? Let’s light this candle!