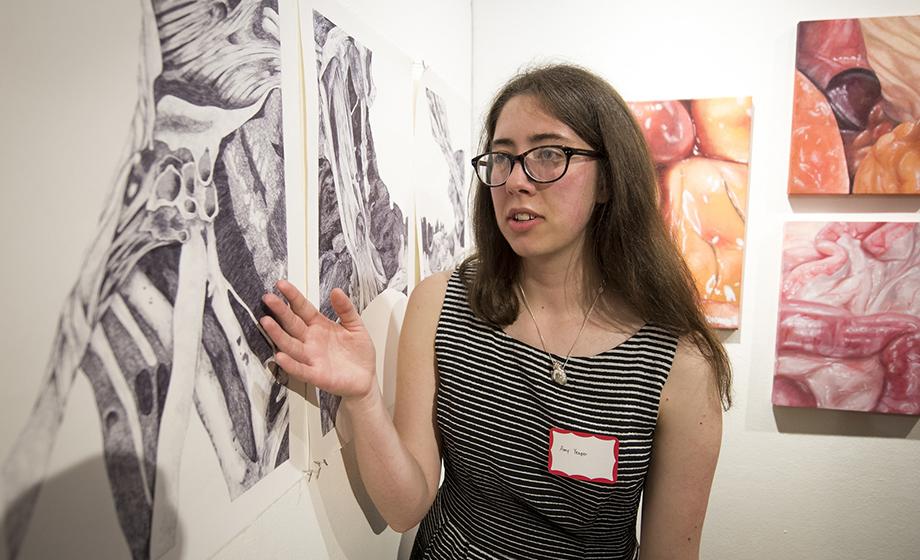 After living in Zimbabwe, South Africa, Romania and Senegal, where she attended small international schools, Amy Yeager ’17 thought Clark University might be a good fit.

“Clark was small with a significant international community, so I thought the transition wouldn’t be so difficult,” she says. “When I got my acceptance letter, I just had a feeling Clark was right for me.”

Now, having graduated this May, she’s even more convinced. Clark, she says, allowed her the freedom to design her own major in scientific illustration.

“In the spring of my sophomore year, I took a comparative anatomy class. It was during the cat dissection, while wrist deep in viscera, that I thought, ‘This is neat to do, but it would be even cooler to draw,’ ” she says. “At that point, I had already declared scientific illustration as my major, but it was a moment that confirmed I was doing the right thing.”

Getting to that point, you might say, was also a self-designed journey. Yeager started at Clark with a desire to study psychology. She then switched to biology, but she still hadn’t found her niche.

“I scoured Clark’s website, and the words ‘student-designed major’ caught my attention almost immediately,” she says.

With the guidance of her parents and her advising committee – professors Patrick Derr of Philosophy, David Hibbett of Biology and Elli Crocker of Studio Art – she proposed a self-designed major in scientific illustration to Kevin McKenna, senior associate dean of the college and director of academic advising.

“I designed the major as preparation for a career illustrating natural subjects through the integration of biology and studio art,” she says. “It contained introductory classes in each discipline before branching into higher-level courses. A required third perspective, ‘Topics in Disease and Medicine,’ increased the scope and application of the degree.”

Hibbett connected Yeager with opportunities to demonstrate what she had learned in coursework. She illustrated fungi for an exhibit at the EcoTarium museum in Worcester. And over two summers, she worked in Hibbett’s lab to illustrate a poster about fungal convergent evolution, or how fungi that are not closely related evolved and developed similar traits (during the second summer, she received funding from the Biology Department’s Summer Undergraduate Research Experience, or SURE, program). She and Hibbett hope to distribute the poster to local high school biology classrooms.

“At Clark, I was able to be a scientific illustrator, an artist, a set designer, a curator, and a teacher as a peer learning assistant. My experiences and education have been diverse, interesting, and incredibly valuable.”

“I see scientific illustration as the visual accumulation and presentation of knowledge with the goal of answering questions,” she writes in this year’s volume of SURJ. “It is the perfect marriage of art and science in which technique triumphs over symbolic meaning, and accuracy is imperative.”

Yeager also gained skills outside of her major. She served as a peer learning assistant for Derr’s first-year intensive course on the AIDS pandemic, and she helped with painting, set design and construction for the student-run Clark Musical Theatre club for three years. And through a course on Gallery Culture and Practice, she helped install several art exhibitions at the Clark Traina Center for the Arts’ Schiltkamp Gallery.

“This course embodied LEEP more than any other class I took at Clark; it was all about practice,” she says. “We spackled holes, drilled, hammered, painted, arranged, worked opening receptions, and met with gallery owners, curators, and artists from around the area. Though I’m not really interested in curating, the course definitely gave me enough hands-on experience to put on my resume should it come up in the future.”

In May, for an exhibition displaying the work of graduating seniors, Yeager became the artist instead of the curator.

Her work titled “Dissection” featured the intricate illustrations of the cat she had dissected her sophomore year.

“These drawings and paintings stem from a fascination with the morbid and unusual,” she wrote in her artist’s statement, “and an equally consuming obsession with technique.”

Yeager is designing her career path as methodically as her art. She is living in Boston and working to save money while she applies to MFA programs.

“My dream,” she says, “is to get a job illustrating at a museum or at a university or even for a magazine.”