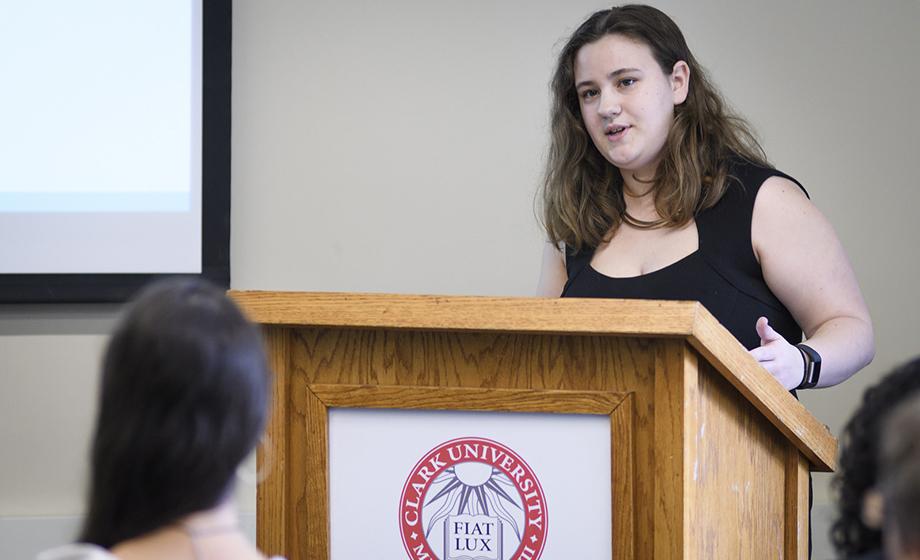 As a history major at Clark University, Emily Langley ’17 became interested in studying the roles of the American and Vietnamese women who served during the Vietnam War.

One thing was missing, however: primary source material about the Vietnamese women who served. So Langley took matters into her own hands.

“When the opportunity to study abroad came up, I leapt at the chance to spend five months in Vietnam as part of a service-learning internship and language-immersion program,” says Langley of Enfield, New Hampshire. “I was able to conduct research on my own time, with help from young Vietnamese women.”

Langley’s honors thesis examines the role of Vietnamese women during the war, as well as how their experience differed from that of American women.

“Ultimately, my thesis examines the role that communism played in the lives of Vietnamese women and argues that Vietnamese women were able to pursue jobs as active combatants, doctors, snipers, squad leaders, diplomats and tacticians because their country’s relationship with communism advocated for equality between the genders,” she explains.

“Women in the United States, on the other hand, were mostly confined to work as nurses and volunteers,” she adds, “because the anti-communist tensions in the United States during the Cold War created very distinct gender norms that were reinforced by the Army.”

Langley interviewed many women while in Vietnam, and she also interned at the Disability Research and Capacity Development Center, a non-profit organization in Ho Chi Minh City. She and a student from Macalester College co-led a research team that examined harassment and abuse against women with disabilities.

“Together, we completed a literature review, developed a survey and hosted multiple interviews with disabled women,” she says.

Their research resulted in a 65-page paper recommending best practices for the organization.

Langley’s work and research in Vietnam grew out of her decision to study history “because I wanted to learn about the context of the world we live in now,” she explains. “My research is often specifically related to understanding global and regional conflicts that have upset tradition and shifted the way we think about the world.”

Meanwhile, her interest in religious conflict led her to design a concentration in peace studies and conflict resolution. Her academic adviser, Nina Kushner, associate professor of history, helped Langley create a course path that allowed her to study both topics.

“At another university, I’m not sure I would have had the support to specialize in such a broad issue that has roots in fields outside of history,” Langley says.

She’s now applying the humanitarian skills she has gained “to work with kids, particularly girls, as an advocate for education, autonomy and political efficacy.” Langley recently accepted a position as a residential caseworker at Key Program Inc. in Worcester, where she’ll work with girls ages 11 to 18 in a group home.

Clark has prepared her for such work by giving her the opportunity to conduct independent research.

“While my advisers were always available for consultation, ultimately each decision I made was my own,” Langley says. “I’ve learned incredible time management through balancing work, clubs and my education. I know that I’ll be able to transfer the tenacity and critical thinking skills I’ve gained from research into whatever I choose to pursue.”