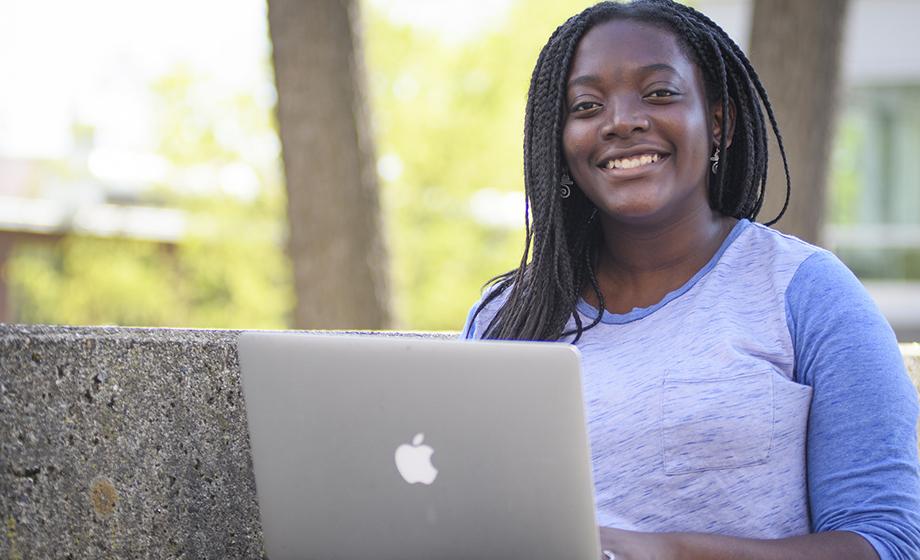 Clark University undergraduate Lisa Musumba ’19 of Nairobi, Kenya, has found a way to apply her multicultural experience and interdisciplinary education to help Spanish-speaking children in Worcester celebrate their heritage.

Musumba, who is majoring in media, culture and the arts and minoring in English and Spanish, volunteers for the Herencia y Cultura Hispánicas, or Hispanic Culture and Heritage, program. Started by Dolores Juan-Moreno, visiting assistant professor of Spanish, and students Celia Ringland ’17 and Margaret Foster ’18, the program allows 8- to 12-year-old Worcester public school students from Spanish-speaking countries to come together through games and activities in Atwood Hall with Musumba and other Clark students acting as hosts.

“Especially in a time when they might feel as though they need to hide the cultural aspect of their identities, we find it important to remind them to celebrate their cultures,” Musumba says. “It has been fulfilling to learn from the kids. We leave the meetings with new knowledge.”

Clark, with its motto of “Challenge Convention. Change Our World” and its diverse, international student body, therefore feels like home.

“Finding Clark felt like such a natural continuation of the alternative education I received at UWC Costa Rica, which championed the power that young people have in contributing positive changes in our communities,” Musumba says. She appreciates how Clark students work together on “initiatives to fight for the ideals and values we believe in,” and that “I can exercise critical thought and debate with people who may have different values or views than I may hold.”

Clark’s curricular options have provided Musumba with the opportunity to explore her beliefs as well as her academic interests.

“During my first year I took on such an eclectic mix of classes that I learned new aspects of my identity,” she says. “It was a great experience to tap into some passions I may have not known I even had.”

She chose to major in media, culture and the arts because it allows her to delve into her wide array of interests.

“The classes range from studio art to screen studies and media theory courses,” Musumba says. “I love that the major takes an interdisciplinary approach to understanding media and the arts, while also considering the wider impact culture has on that understanding.”

Musumba has taken courses focused on African-American identity, many of them with Esther Jones, associate professor of English and E. Franklin Frazier Chair of African American Literature, Theory and Culture.

“The way she promotes reading literature produced by African-American, African and African diaspora writers is inspiring,” Musumba says. “It allows me to acknowledge the necessity of making these silenced voices a topic of conversation in the classroom.”

After graduation, Musumba hopes to return to Kenya and make her mark on the country’s emerging media sector.

“Growing up, most of the media I consumed was imported from the U.S. and other Western countries,” she says. “I hope to change this by helping further the Kenyan local media, and eventually furthering media across the entire African continent.”