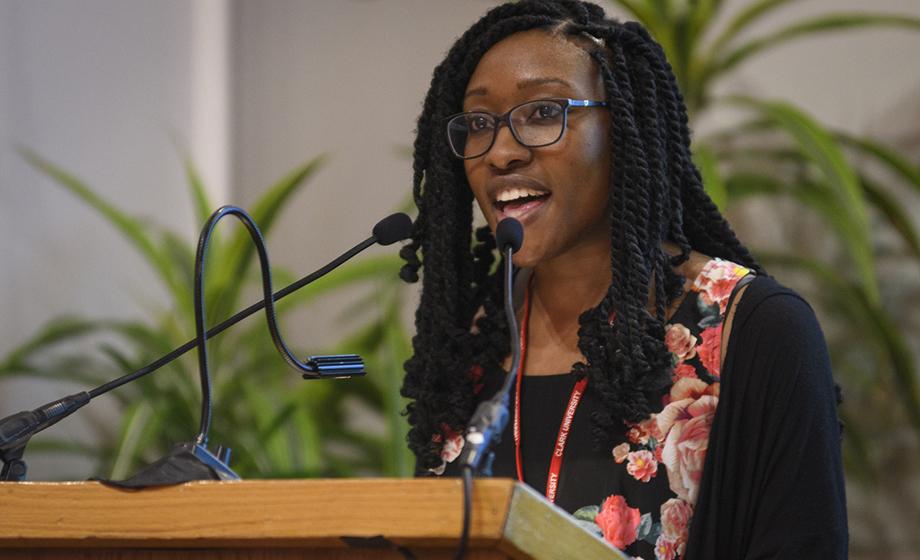 Clark University President David Angel opened the May 19 Reunion Dinner noting that while returning alumni are often curious about what’s new at the University, it’s also important to recognize “the continuity of the mission and values of Clark.”

Speaking to alumni gathered in Tilton Hall, including members of the Class of 1967 celebrating their 50th reunion, President Angel said the University has done much “to follow the same paths that marked the University when you were students here.”

He reported the launch of Clark’s comprehensive campaign, which has already raised $100 million toward its $125 million goal for student scholarships, programs and facilities.

“Nothing is more important to Clark University than the compassion, dedication and talent manifest in the students who make up Clark today,” he said.

President Angel introduced the night’s student speaker, Courtney Thomas’17, a political science major, member of Phi Beta Kappa and president of the Black Student Union. The Freeport, N.Y., native has interned at several nonprofit organizations both here and abroad, and has conducted independent research on LGBT politics in Jamaica and the Dominican Republic.

Thomas described her experience as a first-generation American and the daughter of Jamaican parents who instilled in her the importance of obtaining a top-notch education. She recalled a summer internship that didn’t pan out as planned, but which proved a defining learning moment early in her Clark career. The experience led her to apply for and receive Clark’s Harrington Public Affairs Fellowship, allowing her to live and do research in the Worcester area, with guidance of Srini Sitaraman, associate professor of political science.

Clark is that rare place where the administration gives credence to students’ ideas and positions, Thomas said. The University “helped me think beyond the box and question the world around me,” she said. “I learned how to be an effective leader, challenge the status quo and persevere at all costs.”

Thomas will pursue a master’s degree in public administration at Clark through the Accelerated B.A./Master’s Program. She hopes to pursue public policy advocacy in Washington D.C.

In addition, these alumni awards were announced: