Class of 2017 urged to stand against injustice: ‘Do good and do well’ 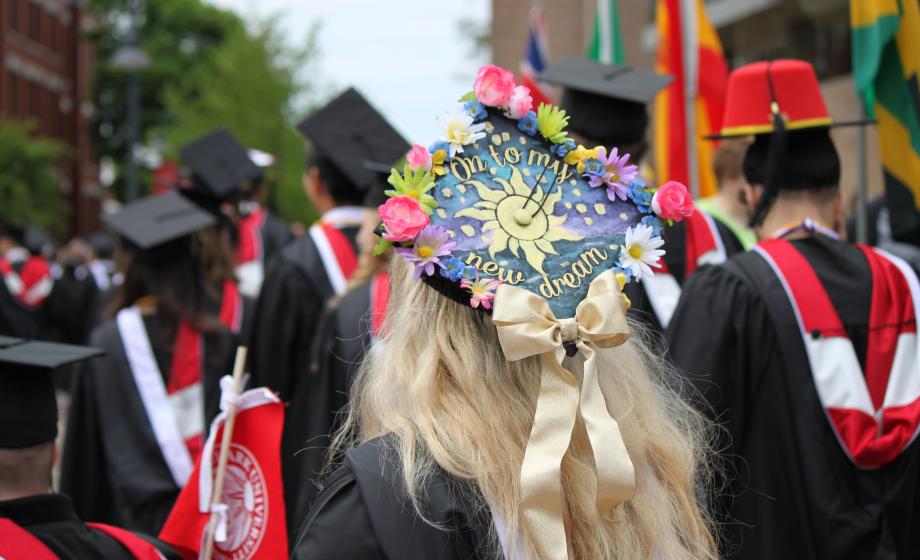 The 113th Clark University Commencement took place under fair skies on Sunday, May 21, on the Jefferson Academic Center Green. The University awarded degrees to 1,173 graduates (576 bachelor’s, 566 master’s and 31 doctoral degrees).

Steven Swain ’89, chair of the University Board of Trustees, welcomed attendees and introduced President David Angel.

“Many of you have participated in research or volunteered, and through all of your activities you have left your mark on Clark and on our community, near and far,” President Angel said. “At times, you have rightly challenged Clark to do better and to be better. Without a doubt, Clark is a stronger institution today than when you matriculated four years ago, and we thank you.”

He exhorted the graduates to acknowledge and honor members of the Clark staff and faculty, who “have been your mentors, your coaches, your advisers and a source of inspiration for us all.”

Read biographies of the speakers, as well as their speeches

In his keynote speech, “Social Justice is in Our DNA,” Dr. Lewis urged graduates to resist those who hold “a prevailing sentiment that you cannot do good and do well at the same time.”

“Many of you have taken genetics, and you know that all human beings share 99.9 percent of the same DNA. Every single one of us — 99.9 percent,” Dr. Lewis said.

“Look to your right and to your left, and down the row. Now look at me.” Dr. Lewis continued. “All of the racial and ethnic difference we are able to identify are accounted for by only one-tenth of 1 percent of our DNA. Said differently, that 0.1 percent has accounted for a lot of horror and war and cruelty throughout our history. Yet, if we were to shift our focus to the 99.9 percent of commonality, we may be able to recognize that on some very real level — not in some metaphorical sense, but on a scientifically verified level — we are all members of the same family. …

“When you find yourselves challenged by those who ask why they, or you, for that matter, should stand up for the disadvantaged or speak out for the disenfranchised around the corner or around the globe, tell them simply because social justice is in our DNA.”

Dr. Lewis asked the graduates to stand and repeat enthusiastically: “We, the graduating class of Clark University, will do the unimagined. We will nurture and promote our passion for social justice and change the world, responsibly.”

Bittman is a food journalist, author and former columnist for The New York Times. He also is a Clark alumnus, graduating in 1971 with a degree in psychology. Greenhouse is the Joseph Goldstein Lecturer in Law and Knight Distinguished Journalist-in-Residence at Yale Law School. She contributes a bi-weekly New York Times op-ed column, and is president of the American Philosophical Society, the first woman to serve in that position in the society’s 274-year history.

Ophelia Okoh, of Worcester, delivered the Senior Address, asking her peers to consider the meaning of community and service. Okoh majored in biology on a pre-med track, and hopes one day to become a family medicine physician working in low-income areas.

“Recognize that these diplomas have not been given to us for the sole purpose to be hung up in our future homes or offices,” she told her classmates. “These diplomas are certificates to serve. Before continuing, I want to make it clear that though our gowns may look like capes, we have not been equipped to save the world, but to serve it.”

Olamide Adeyinka, who received an MBA and a master’s degree in International Development and Social Change, was elected to present the Graduate School address.

“I grew up in a country where more than half of the population live on less than a dollar day … and where injustice and poverty is the norm,” she told her fellow graduates. “Even through it all, my father in his words and actions taught me two important lessons: perseverance and giving back. That if you just work hard enough and push further enough, if you persevere just a little bit more and never give up, it would lead you to the destination you want.”