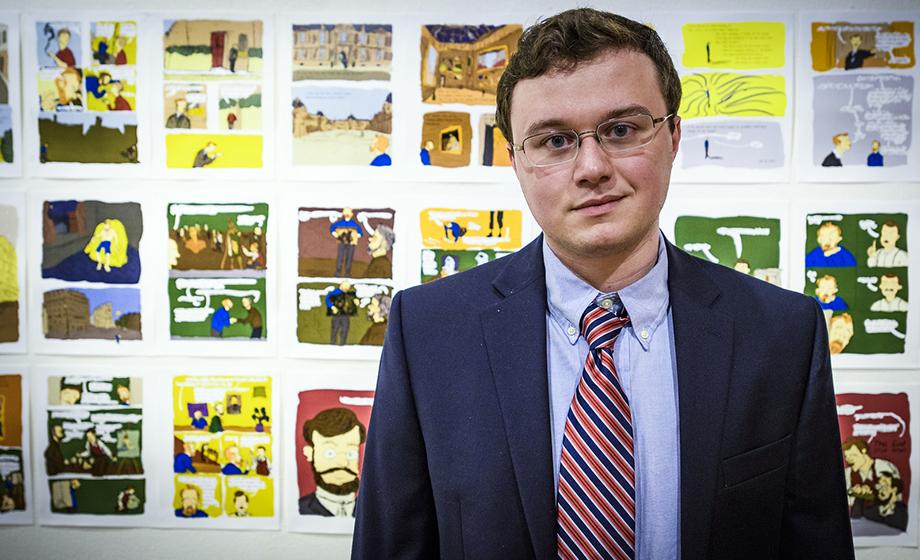 Taking a cue from Post-Impressionist Dutch painter Vincent Van Gogh, Grant Henry ’17 headed to Paris last summer to envelop himself in the world of art and explore and document places like Montmartre, the red-light district that harbored artists of Europe’s fertile Belle Époque period (1871-1914).

Nine months later, he emerged with a well-researched graphic novel, “The Adventures of Van Gogh in Paris,” which serves as his honors thesis in studio art. His graphic novel is part of an exhibit of Clark seniors’ work in the Traina Center for the Arts’ Schiltkamp Gallery. It runs through May 22.

But his main focus was Paris, where Van Gogh spent 1886 to 1888, befriending Paul Gauguin, Henri de Toulouse-Lautrec and other artists and soaking up the artwork of the Louvre and neighborhood galleries and studios. As Henry’s graphic novel shows, Paris had a lasting effect on Van Gogh, who was influenced by paintings ranging from Eugène Delacroix’s “Apollo Slays Python” to Georges Seurat’s “A Sunday Afternoon on the Island of La Grande Jatte.” Henry also depicts Van Gogh’s discovery of Impressionism and his learning alongside artist friends like Toulouse-Lautrec in an atelier, or studio.

“I’m fascinated by the two years Van Gogh spent in Paris, where he developed his iconic painting style. He enters the city as a lover of tried-and-true realism, and leaves as a prominent member of the Paris avant garde,” says Henry, of Glastonbury, Connecticut, who will graduate from Clark this month.

Henry applied both of his majors – studio art and art history – to his graphic novel project.

“I did an independent study on Vincent Van Gogh and Post-Impressionism under Professor Kristina Wilson’s supervision that gave me enough wisdom to know how to tell this story,” he says.

Henry’s artistic style stems from his love of Japanese animé, depicted in three of his favorite films, Katsuhiro Otomo’s “Akira” and Hayao Miyazaki’s “Castle in the Sky” and “Spirited Away.” He also has been influenced by the 20th-century Belgian cartoonist Hergé’s “The Adventures of Tintin” series, featuring the world travels of the young reporter Tintin and his dog, Snowy.

Hergé, the nom de plume of Georges Remi, sketched his characters using a clean, “clear line” style, which still influences cartoonists today. Henry’s “The Adventures of Van Gogh in Paris” echoes “The Adventures of Tintin” not only in name but in style, using similar defined strokes.

“My story is as much inspired by Van Gogh and Toulouse-Lautrec as it is by ‘Tintin’ and ‘Peanuts,’” Henry explained in an artist statement accompanying his recent exhibition at Clark’s Traina Center for the Performing Arts. “I write this as a comic book because a story about color and line ought to be experienced through color and line, too.”

For Henry, the pursuit of art has been a devotion since childhood, but it wasn’t until he took studio art and art history classes at Clark that he realized he might he make a lifelong career of it. His advisers – Wilson in art history and Elli Crocker in studio art – helped him figure out a plan that would provide him with the necessary experience to pursue a master of fine arts, become an art professor and continue developing as an artist.

That plan included curating shows at the Traina Center gallery and working as a peer learning assistant for studio art and art history classes. Henry also was part of a semester-long art history seminar, taught by Wilson and Nancy Burns of the Worcester Art Museum, which culminated in the museum’s 2016 exhibition titled “Cyanotypes: Photography’s Blue Period.” Henry helped create a catalog for the photography show, research and write labels for the artwork, and write for an exhibition blog.

“It was a fantastic experience. It honed my skills as a writer and also gave me my first look into how an art museum goes about creating an exhibition,” he says.

“At Clark, my engagement beyond the classroom has helped me gain a ton of experience that goes beyond creating art itself,” Henry adds. “I feel ready to pursue a career in almost any area of the arts, from creation to curation and education.”