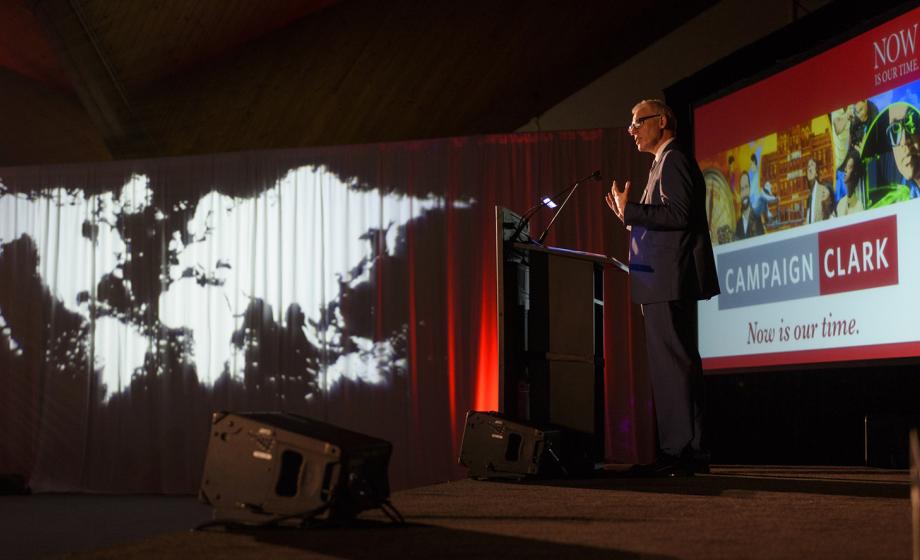 Clark University announced the public launch of its $125 million comprehensive campaign at a May 5 event held in the Kneller Athletic Center.

A standing ovation greeted the announcement that Ronald Shaich ’76, L.H.D. ’14, the founder, chairman and CEO of Panera Bread, and his family have made a $5 million gift to support Clark’s leadership in liberal education.

“Our reputation reaches out from this campus to all parts of the globe,” said Sumner B. Tilton Jr., LL.D. ’13, co-chair of Campaign Clark, during introductory remarks at Friday’s dinner. His fellow campaign chairs are William Mosakowski ’76, L.H.D. ’12, and Robert Stevenish, P ’86.

Clark President David Angel told the audience the campaign marks a renewed commitment from donors to support Clark University’s work to make an enduring difference through research, undergraduate and graduate education, and community leadership. To date, the campaign has raised just over $101 million, or 81 percent of the goal.

View more photos from the May 5 campaign launch event

The campaign, which is themed “Now Is Our Time,” will support student scholarships, faculty scholarship and creative work, academic programs, endowed professorships, facilities and the Clark Fund. “Our intent is to integrate advanced research with undergraduate and graduate studies in ways that address the most pressing concerns in our society,” he said.

“This is a place that isn’t like other universities,” President Angel said. “It’s a place willing to stand for something in our community, in our country, and in our world.

“We do not accept the status quo. We know that we can do better. That is our mission, and our focus.”

In his remarks, Shaich recalled that he was attracted to Clark by the spirit of political activism pervading the campus and by the commitment to effecting change. His education, he said, “was less about what happened in the classroom every day, and more about directed readings, internships, and mentoring from faculty who helped me to learn and to grow and to explore who I was, what I really enjoyed doing, and what mattered to me in my life.”

The gift, he noted, is an opportunity to help other Clark students flourish in an economy and society that has undergone a profound transformation since he left campus forty years ago.

“It’s absolutely clear there is a crying need for young people who have creativity, who have empathy, who have an understanding of others, who have resilience in the face of difficulty and the courage to do what is right,” Shaich said. Clark, he added, has all the ingredients for success, but needs sufficient resources “to truly activate its extraordinary potential.”

“I ask you to join with me and my family to invest in Clark,” he concluded. “Yes, out of gratitude. Yes, out of appreciation. But more importantly, out of the realization of what liberal education can be and what we can accomplish together. Now is our time.”

The evening’s program concluded with remarks by Mohamed Elmaola ’18. He recounted a turbulent home life and lack of funds that would have prevented him from attaining a college degree without being plunged into significant debt. A LEEP scholarship has allowed him to attend Clark University.

Elmaola has devoted a considerable part of his college experience to public service, including giving motivational speeches at a local elementary school and operating soccer clinics for Worcester children. Clark’s generosity, he said, made it possible.

“The school said, ‘You’re worth our trust and our resources,’” he observed.

Jeffrey Gillooly, Vice President for University Advancement, noted the significant progress made so far toward the $125 million goal for Campaign Clark.

“We are so pleased that Ron and Nancy Shaich, and so many more exemplars, have stepped forward to lead in the quiet phase of this campaign,” he said. “We still have work to do, but with the help of so many generous alumni, parents and friends we are well on our way to reaching our goal and ensuring that Clark University remains a leader in higher education now and well into the future.”