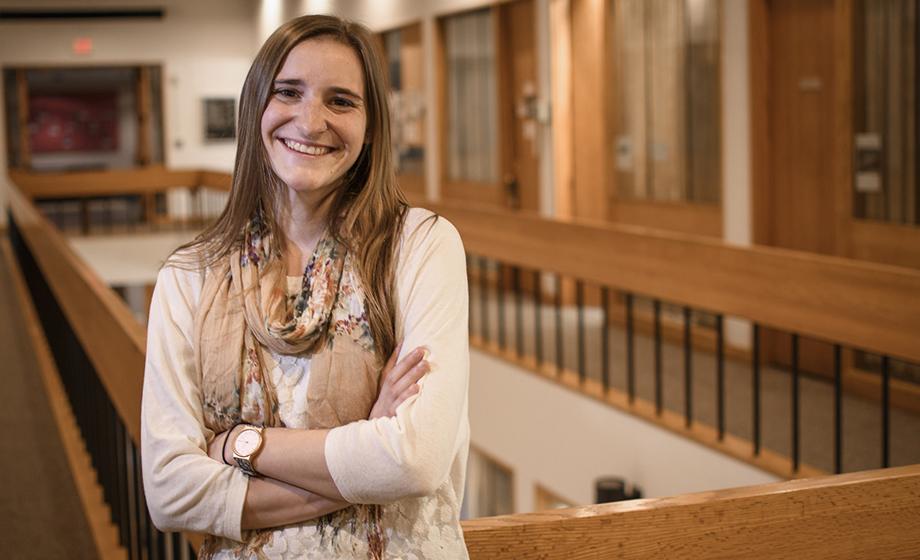 Because of their dogged pursuit of elusive primary sources, historians often are equated with detectives – a theme represented in a decade-long PBS series, History Detectives.

For Alex Jeannotte ’17, that theme has carried through much of her time at Clark University, where she has helped knit together the genealogy of an African-American family who migrated from Camden, South Carolina, to Worcester.

Jeannotte first encountered the Perkins family during her sophomore year, when she took “Public History: Race in the U.S.,” a seminar taught by History Professor Janette Greenwood, who has blogged about her own experience tracing the family’s history.

Jeannotte, a history and sociology major from Agawam, Massachusetts, became so fascinated with uncovering the mysteries of the Perkins genealogy – part of the larger story of the African-American community in Worcester – that she continued working with Greenwood outside of class.

The project stems from a collection of over 230 portraits of African-Americans and Native Americans, most them from Worcester’s Beaver Brook community, taken by photographer William Bullard from 1897 to 1917. Thirty-four portraits include Perkins family members. Last fall, Jeannotte helped Greenwood organize meetings of Worcester community members who are contributing to and advising the project.

This spring, Jeannotte continued researching the Perkins family’s roots through a Problems of Practice class called “Public History: Race, Photography, and Community” co-taught by Greenwood and Nancy Burns of the Worcester Art Museum.

The research by Jeannotte and her classmates will culminate in an exhibition of Bullard’s photographs at the museum from Oct. 14, 2017, to Feb. 25, 2018.

Jeannotte is creating a webpage about how and why the Perkins family ended up in Worcester and compiling information for labels for Bullard’s photos of Rose, Edward and Abraham Perkins.

“It is important for the exhibition that there is a living link to the people in the photos,” she says.

To that end, Jeannotte and her classmate, Toni Armstrong ’19, an art history major, recently interviewed two Perkins sisters from Worcester – Kim Perkins Hampton and Wendy Byfield – who have become involved in the project to uncover their family history.

“It’s like a wild-goose chase,” Armstrong says of tracking down primary sources.

“I would have never done anything like this. I was always curious, but I didn’t have the time,” Hampton says. “We feel really lucky and blessed to be the receivers of all this hard work.”

Jeannotte and Armstrong have spent hours seeking out primary genealogical sources such as birth, marriage and death certificates, censuses, newspaper articles and obituaries.

For a while, the birth year of the sisters’ great-grandfather, Henry Perkins Sr. eluded them.

“The 1890 U.S. Census records were lost in a fire,” Jeannotte says. “Then in 1900, he popped up in the Census.” Finally, she identified a record of his 1878 birth via an index of Social Security applications. “We connected Henry back into the family tree,” she says.

For Jeannotte, the Perkins project is the capstone to four years of study in two majors that have complemented her interest in social justice issues.

Originally, she had planned to concentrate on Holocaust and genocide studies, motivated by the friends and relatives her family lost in the Armenian genocide of the early 20th century. Instead, she found herself drawn to studying the history of racial injustice in the United States.

“Clark is a place that cares about what’s humane,” Jeannotte says. “Although I never ended up in the Holocaust and genocide studies program, it will always mean a lot to me that Clark commits to upholding the roots of these histories.”

Seven students from the class, along with two more Clark students and a number of undergraduates from across the country, participated in the Highlander training.

“We engaged in dialogue and workshops on racial and gender justice issues,” Jeannotte says. “This experience challenged me to think about myself in relation to the causes of social justice in ways that I wouldn’t have been able to if it weren’t for the people who surrounded me.”

Her history courses have fostered an interest in the African-American experience in the United States. Last semester, she took the department’s consortium course at the American Antiquarian Society in Worcester taught by Joanne Pope Melish, associate professor of American studies and history at the University of Kentucky.

“It couldn’t have been a more perfect fit for my undergraduate coursework at Clark because it was about New England slaveholding,” Jeannotte says. “It was a great space to engage with students from other schools as well as learn from direct primary sources inside the research library.”

With graduation nearing, she’s preparing to take the LSAT exams for law school. She also may apply to the Peace Corps to work in Armenia.

But no matter where she ends up, she says, “the critical self-reflection that I’ve learned from my experiences at Clark have given me the chance to foster empathy and interpersonal communication skills.”