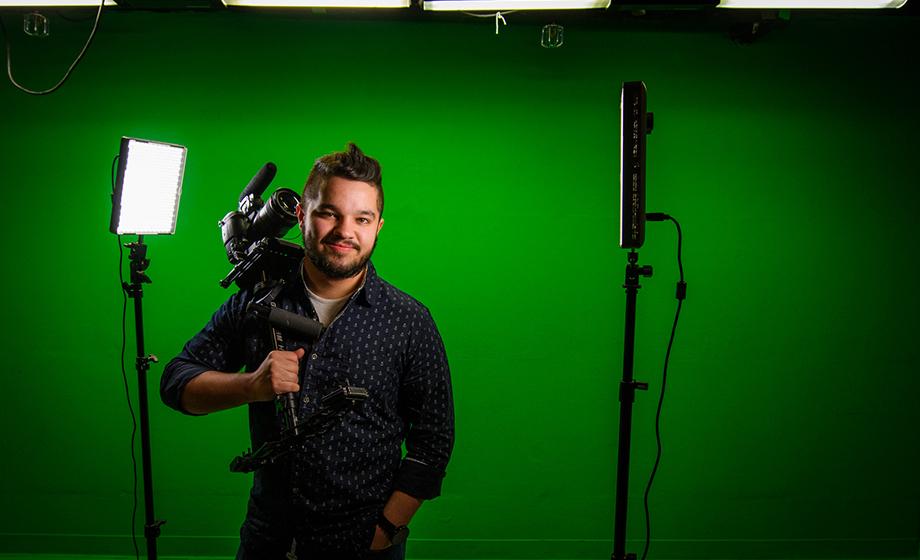 By his own description, Mitchell Gamache ’17 has always been a “visual kind of guy.” So, it felt natural for him to major in screen studies when he enrolled at Clark University.

“Growing up, I made short films with my friends and studied graphic design in high school,” he says. “When I got to college, I wanted to continue creating and expressing myself through a visual medium.”

Since those first films, Gamache’s filmmaking has become more sophisticated and nuanced, something he attributes to working closely with faculty members in the Visual and Performing Arts Department as well as collaborating with fellow students.

“I feel I have gotten to know each of my advisers — Michael Siegel, Hugh Manon and Soren Sorensen — closely, which makes the learning process so much more enjoyable,” he says. “Also, while some students may be studying the same things, being able to discuss our own interpretations and learn from others is fascinating.”

Besides the intimate class size, what excites Gamache most about his major is that he isn’t just studying film. He’s learning television, new media and other platforms from both analytical and hands-on perspectives.

“I really like having the option to explore the theoretical side as well as make something myself,” he says.

In addition to his classwork and independent projects, Gamache works as a student videographer for the University’s Marketing and Communications Office, is a teaching assistant for two digital filmmaking courses and is president of Clark’s Film Production Society. He also enjoys photography and believes the medium has helped him improve his filmmaking.

“Photography and filmmaking are consistent mediums and they have inspired me to always be creating,” he says.

His experiential learning journey doesn’t end there. Through a directed study, Gamache is creating a short documentary film about undergraduate students who volunteer for an afterschool art and poetry program with Worcester middle school students called “In Our Own Words.”

Gamache hopes the dedication to his craft and a strong work ethic will lead to a career in the film industry, whether behind the camera or in the editing booth. His time at Clark, he says, has helped him build connections for his future.

“Clark, its students and faculty, have helped me create new work and to be proud of what I’ve done,” he says. “What I’ve learned here – to network and connect with people of similar or different disciplines — will help me get even further in my career.”