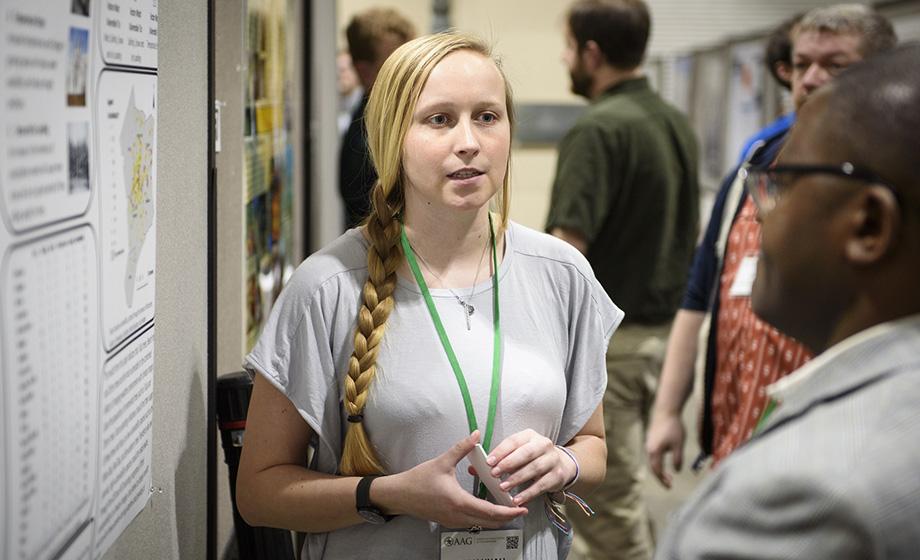 Twenty-one undergraduates and seven master’s degree students from Clark University Geography presented posters at the American Association of Geographers’ (AAG) annual meeting April 5-9 in Boston, and for many, the chance to explain research to peers and faculty from across the world marked a step into new territory.

“This is my first time at AAG. It’s interesting that I’m presenting on the same level as students who are younger than me, as well as students and professors who are older than me, and that’s something to be proud of,” Savannah Sanford ’17 said during the event. Sanford  (pictured above), an environmental science major on the earth systems science track, presented a poster on “Mapping Juvenile Tree Vulnerability to Environmental Phenomena with Climate Change in Worcester, Massachusetts.”

“It’s great that at Clark, you can accomplish these sorts of things and use it in a job application or for future research,” added Sanford, who is headed into Clark’s fifth-year program in geographic information science (GIS).

Last summer, the HERO students collected data on a sampling of 30,000 trees planted by the Worcester Tree Initiative and the Department of Conservation and Recreation to replace those removed to eradicate the Asian longhorned beetle, as well as interview residents who received replacement trees. They were mentored by two doctoral students in geography, Arthur Elmes and Zhiwen Zhu, as well as Professor Deborah Martin and Associate Professor John Rogan, who oversee the HERO program in the Graduate School of Geography.

Also at the AAG conference on April 7 was Saira Khan ’17, a double major in geography and international development and social change. She presented a poster on “Mapping Overlap Between Extractive Industries, Agriculture and Indigenous Communities: A Case Study of the San Andrés Mine in Copán, Honduras.” Khan worked on the project with Rogan; Anthony Bebbington, M.A.’88, Ph.D.’90, director of the Graduate School of Geography and Milton P. and Alice C. Higgins Professor of Environment and Society; and geography doctoral student Benjamin Fash.

“I’m very interested in displacement of people, refugees, and human-land conflict. It’s been an interesting project to join, and Clark has many resources. The professors have so much knowledge about the subject, and I’ve always had a lot of support from people who have worked on this project for years and years,” said Khan, who also plans to enter the fifth-year GIS program.

“The students’ poster sessions and attendance at the conference are made possible by alumni gifts to the department, as well as by an immense amount of faculty mentoring,” Bebbington said. “Their participation in the conference is a testament to the quality and ambition of our students.”

The AAG conference also provides an opportunity for the alumni of Clark’s top-rated doctoral program in geography to reconnect with each other and the faculty. In particular, two sessions on “50 Years of Radical Geography at Clark” on April 5 honored Professor J. Richard Peet and his 50 years of service at Clark, with presentations by geography graduates from across the decades. And on April 7, three sessions honoring Professor Dianne Rocheleau drew a number of alumni. Rocheleau, who has served on the geography faculty at Clark since 1989, is retiring this spring.

Besides Khan and Sanford, the other undergraduate students presenting posters throughout the five days included: