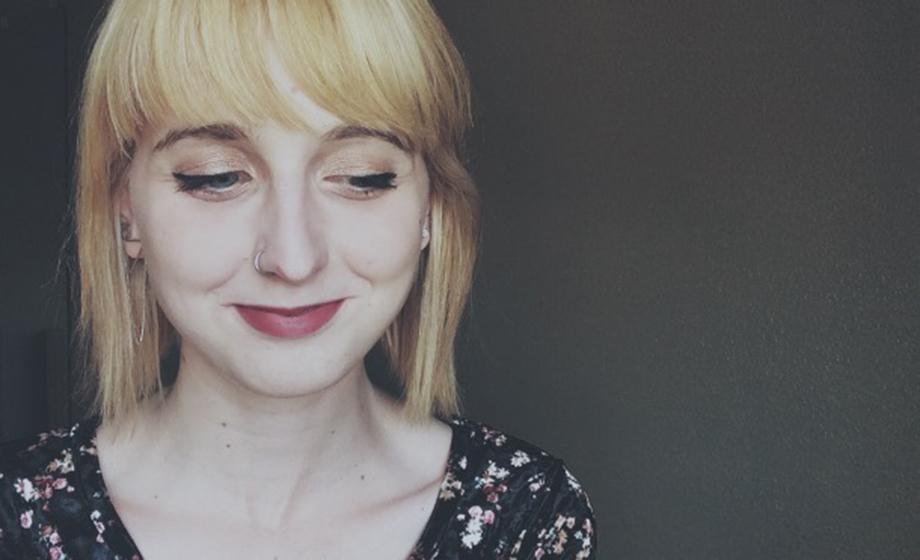 SASHA, a 2016 Clark University graduate, hesitantly approaches an open laptop placed on a desk. Its screen glows back at her as she reads an email, her eyes growing wider.

Sasha enters room with laptop, shows screen to her parents with her dog nearby and a celebration ensues.

The scene above played out in January when Kohan received a Sundance/Roger Ebert Fellowship for Film Criticism and learned she would be attending the world-renowned film festival in Park City, Utah. She was just one of three applicants from a field of 300 who would watch the films, listen to the panels and write about themes for RogerEbert.com.

“It was extremely gratifying and a huge relief to know I was about to actually use what I’d learned studying English and film in the real world,” Kohan says.

The story behind Kohan’s Sundance experience begins long before that cold night in Maine. While she always knew she wanted to major in English, she discovered how interesting film analysis could be after taking a screen studies course during her first semester at Clark.

“I loved watching movies, but found how much more exciting it could be to write about them in addition to literature,” she says. “I love the critical analysis and interpretation aspect of English, and with film, you not only have the words and script to interpret, but a million other things like lighting, sound, color, costumes — there’s just tons more material to work with.”

Kohan added a screen studies major, reveled in her classes, but agonized over one — screenwriting.

“It was the most anxiety-inducing class,” she says. “But, it’s also the one that taught me the most about storytelling and narrative structure, which was extremely valuable for the rest of my three years taking film and English classes.”

Her screenwriting instructor and adviser, Professor Hugh Manon, encouraged Kohan to apply for the Ebert Fellowship during her senior year. While she wasn’t selected at the time, Kohan tracked the progress of that year’s fellows and kept tabs on the action at Sundance.

Kohan, a member of Phi Beta Kappa and winner of the Virginia Vaughan Prize for Most Outstanding Honors Thesis for her work on “Betty, Sally and Existential Womanhood in ‘Mad Men,” recalls talking with fellow students in her years at Clark about what they learned and how it related to personal experience. “Clark students are always teaching and learning from each other.”

The same spirit of discovery carried into her Ebert Fellowship. While in Park City, Kohan saw 22 films over 10 days, and a majority of the movies connected with the uncertainty she and others felt about current events as the excitement of the festival overlapped with the presidential inauguration.

“In the wake of the election, it seemed like every movie I saw, more or less, was about the ability or inability characters had to relate to one another, and to try and understand a point of view besides their own,” she said.

One panel discussion she attended called “Post-Truth and Consequences” was an hour-long discussion between journalists and documentary filmmakers about “how to move forward as media-makers in a world where intelligence and academia are unacknowledged or disrespected.” While solid answers weren’t forthcoming, she says the forum opened her eyes to other perspectives.

Kohan had several movies to see in order to tackle her assigned topic of race and police tension in the festival films. She was nervous for her first interview, which was with Jonathan Olshefski and Sabrina Schmidt Gordon, the director and producer of “Quest” — a documentary that follows the lives and struggles of the Rainey family of Philadelphia over eight years. But Kohan and Schmidt Gordon quickly launched into a productive, probing dialogue about the film.

“It made me feel like a good English/screen studies major,” she says.

Kohan and the other Ebert Fellows were told to keep Sundance’s main themes of empathy, compassion, kindness and forgiveness in mind throughout their viewing and analysis. At one point, she asked herself the question: “How am I actually helping anyone by going to see movies and then writing about them?”

Then, she thought back to something Professor Betsy Huang, her English and honors thesis adviser, once said when Kohan interviewed her for a film project. “She said she always told her literature classes that every time you read a story, you’re giving a portion of your everyday life to the lives of others, and that’s a form of empathy.”

Kohan has been accepted into the University of Southern California’s master’s program for cinema and media studies, and she’s also documenting the story of her generation in her new online magazine Germinal. Spurred to action by the 2016 Presidential election, Kohan wanted to use the writing experience she gained at Clark and as an intern for The Worcester Journal in a meaningful way.

Kohan is the magazine’s editor and works with Alyssa Freitas, a high school friend, who serves as art director. They just published their first issue to a positive response and are excited about its prospects as an empowering platform for young people.

“Empathy was a motivator in starting this, and that can be really hard, especially when it comes to politics, especially now,” she says. “I hope Germinal can try to bridge the gap between the left and right sides of my generation.”

Through her Sundance experience, upcoming graduate school work and Germinal initiative, Kohan continues to make connections, and offers some advice to Clark students wondering how to do the same.

“If you know enough about two totally different things, there’s a good chance that examining them in relation to each other will make you see something you didn’t see before,” she says. “Find a way to make it part of the bigger picture and try not to doubt that what you have to offer is important.”